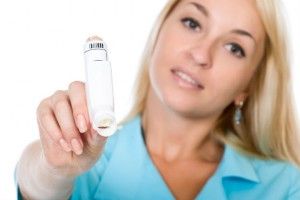 Many women blame energy drain, irritability, and dreaded cramps on “that time of the month”. However, they might be adding asthma symptoms—such as coughing and wheezing—to the list of menstrual woes as well.

The Norwegian study monitored spikes and dips in estrogen and other hormones levels likely to affect the lungs and breathing in a group of 4,000 women (less than 8-percent diagnosed with asthma) who had normal periods and weren’t taking birth control pills.

All participants were asked to keep track of when their last period started, as well as any breathing-related issues—such as coughing attacks or wheezing—over a period of three days. Reports show that 6-percent of participants reported recent wheezing, coughing and/or shortness of breath—even those without asthma.

Surprisingly, the number of women with of each of those symptoms changed depending on where they were in their menstrual cycle, for instance:

Even though it’s still unclear whether the findings can actually improve doctors’ treatment of women with asthma, the study reveals an obvious pattern. For instance, estrogen may affect the lungs directly, and insulin resistance and markers of general inflammation are known to vary during the menstrual cycle, which could also impact breathing.

“The observed patterns in our study are most likely a result of… complex hormonal processes,” said Dr. Samar Farha, an asthma and respiratory disease researcher from the Cleveland Clinic. “[This research] could lead to more personalized therapy, based on where their symptoms are getting worse, in which phases of their menstrual cycle…therapy could change and escalate based on [those] phases.”

Farha also notes that asthmatic women should consult with a medical profession if their symptoms seem to worsen at certain times of the month.