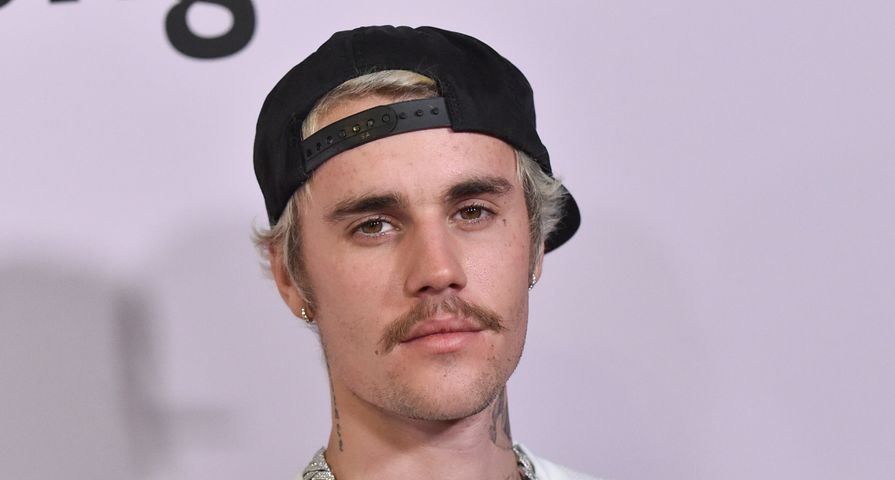 Most people have heard of chickenpox and shingles, but likely not Ramsay Hunt syndrome. These three illnesses are all inextricably linked. Ramsay Hunt syndrome, also known as herpes zoster oticus, is a rare type of shingles. It occurs when a shingles outbreak affects a facial nerve near one ear, says the Mayo Clinic. In the case of Ramsay Hunt syndrome, there is also facial paralysis and hearing loss in one ear.

Ramsay Hunt syndrome is a shingles outbreak that affects the facial nerves close to the ears. When shingles occurs and affects one ear it’s caused by a virus called herpes zoster oticus, explains Healthline. “The general varicella-zoster virus also causes chickenpox, which is most common in children,” notes the source. If you’ve had chickenpox before, the virus can reactivate later in life and cause shingles.

The biggest identifier for both shingles and chickenpox is their rash. Shingles is different from chickenpox in the sense that it can occur in one localized area such as the facial nerves near the ears, causing other complications like facial paralysis and ear pain, says Healthline. In this case, it is diagnosed as Ramsay Hunt syndrome. 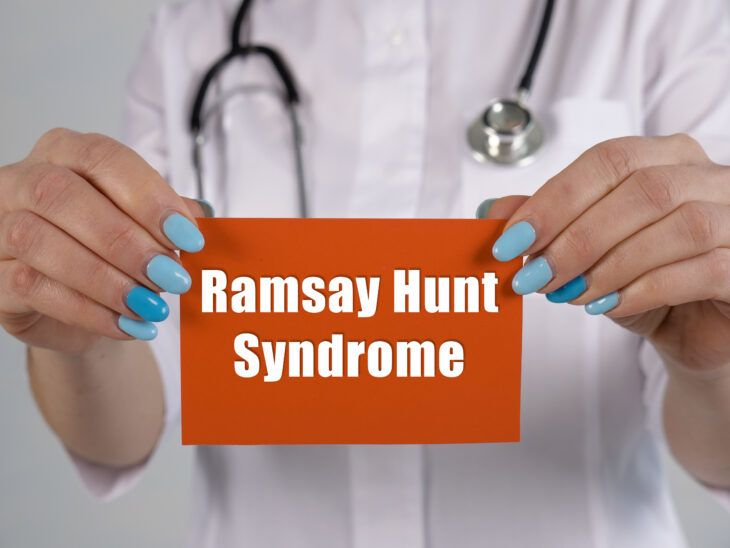 The two main symptoms of Ramsay Hunt syndrome are a “painful red rash with fluid-filled blisters on, in and around one ear,” writes the Mayo Clinic. This is known as the shingles rash. Healthline also notes that this rash can appear in the mouth, particularly on the roof of the mouth or top of the throat. However there are times when a rash doesn’t appear at all. 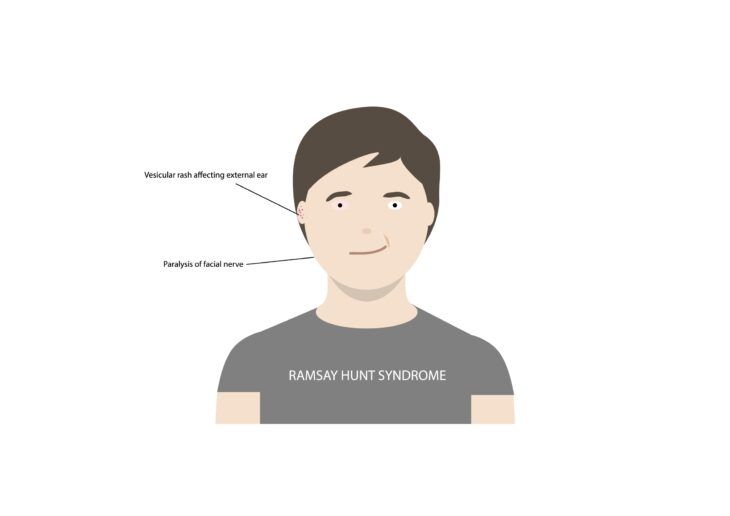 While the rash and facial paralysis are the two most common symptoms of Ramsay Hunt syndrome, there are other symptoms that can occur. These include, ear and neck pain, hearing loss, ringing in your ears (tinnitus), difficulty closing one eye, a spinning or moving sensation (vertigo), change in taste, and dry mouth or eyes, says the Mayo Clinic.

Mount Sinai adds that the facial paralysis will likely lead to more symptoms like slurred speech, difficulty eating (food falls out of the weak corner of the mouth), making expressions and fine movements of the face, as well as some facial drooping. 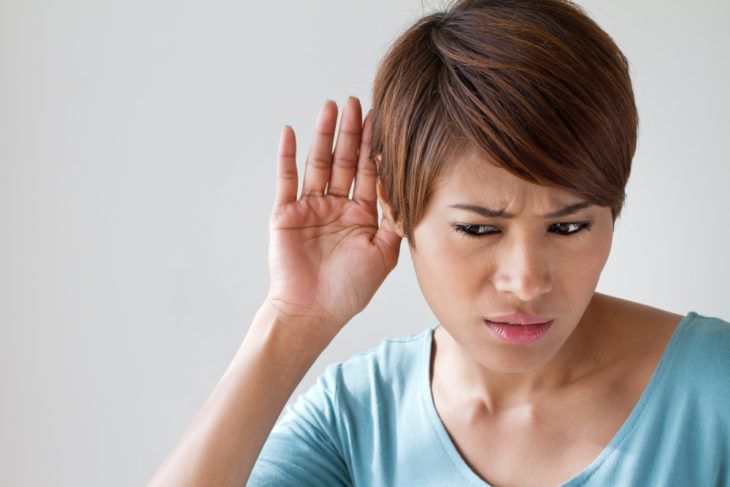 This illness is caused by a virus — the chickenpox virus. As a result, it occurs in people who’ve had the chickenpox. According to the Mayo Clinic, after a person recovers from the chickenpox, the virus stays in their body and can reactivate years later to cause shingles. Shingles is a painful rash that causes fluid-filled blisters.

Ramsay Hunt syndrome is essentially a shingles outbreak, says the Mayo Clinic. But instead of occurring all over the body, it targets the facial nerve near one ear. “It can also cause one-sided facial paralysis and hearing loss,” notes the source. 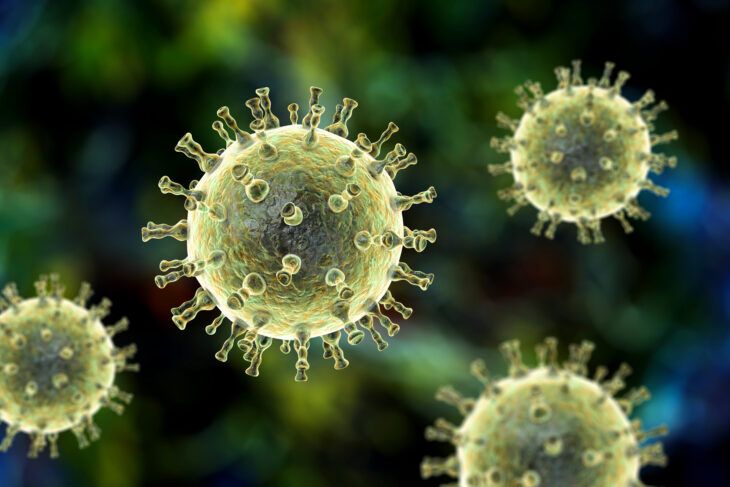 Ramsay Hunt syndrome is caused by the same virus as shingles, so they share the same causes and risk factors. It can occur in anyone who has had the chickenpox, says the Mayo Clinic. However, it does tend to target older adults, particularly people over the age of 60.

People with a weak or compromised immune system are also at risk. The good news is that it rarely ever affects children, adds the source. 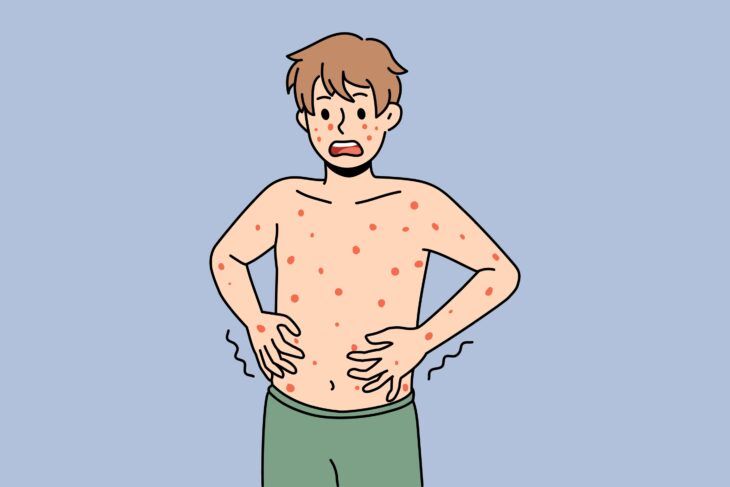 It is not contagious, says Medical News Today, however reactivation of the varicella-zoster virus can cause chickenpox in people who haven’t previously had it or been vaccinated for it. People with this syndrome should wait until all blisters scab over before coming into contact with other individuals because it can be serious for people with immune problems, warns the Mayo Clinic. 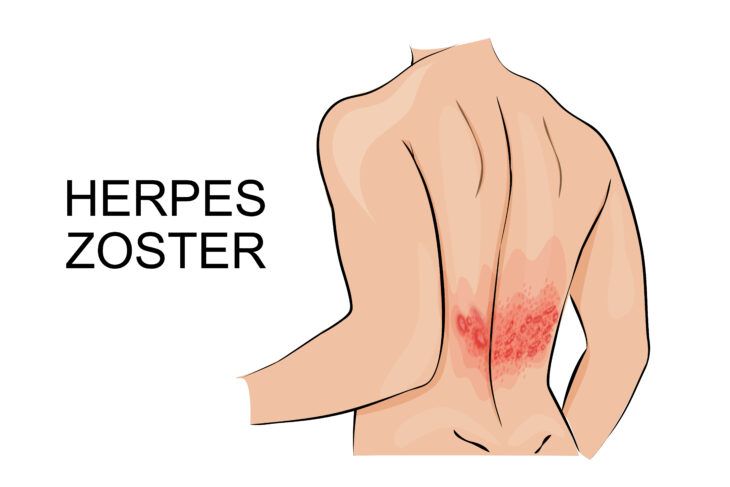 As with most illnesses there is a potential for complications. As long as treatment is sought quickly (a few days after the onset of symptoms), Ramsay Hunt syndrome complications are rare, says Medical News Today. A small percentage of patients may experience permanent hearing loss and facial weakness, even if they sought treatment quickly and it was effective.

According to the same source, people who aren’t prompt with their treatment are at risk of having permanent facial paralysis and struggling with uncontrolled movements like blinking. “Some people may find it hard to close one eye, which can eventually damage the cornea, leading to eye pain and vision problems,” writes Medical News Today. 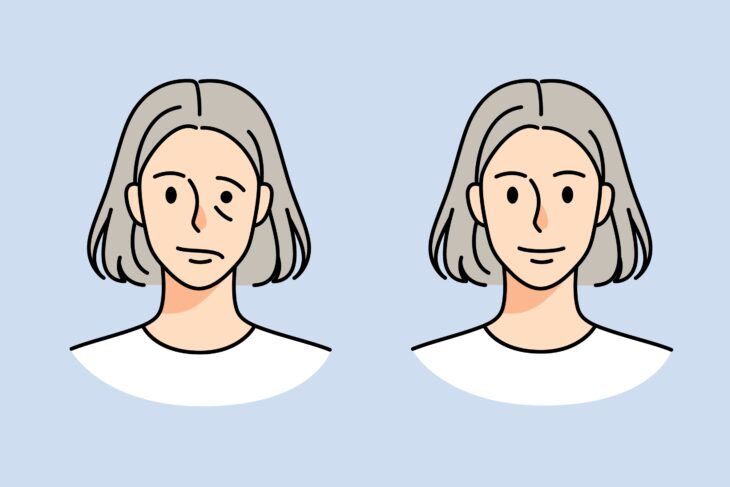 Postherpetic neuralgia is a complication that can occur long after all the other symptoms have subsided. In these cases, the virus has likely spread to other nerves such as the brain and spinal cord, causing “confusion, lethargy, back pain, weakness in the arms and legs, and headaches,” notes Medical News Today.

In these cases, the source also states the patient may require a spinal tap in order to determine which areas of their nervous system have been affected. 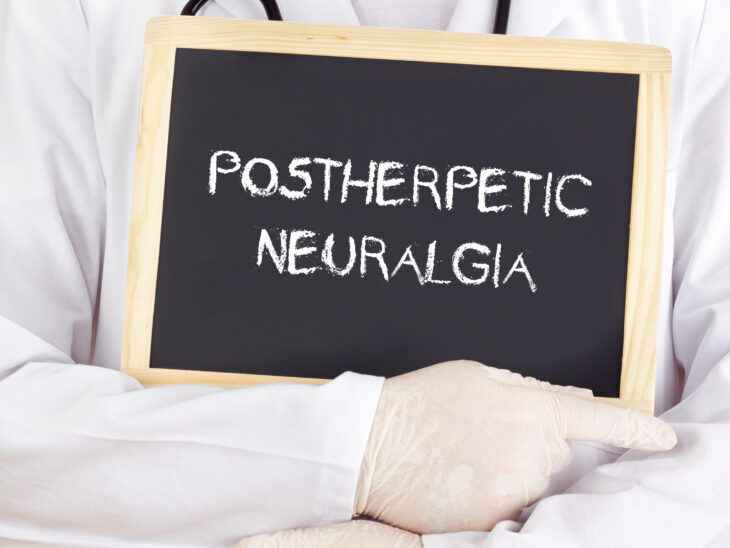 How is it Diagnosed?

According to WebMD, a doctor can usually diagnose this illness just by asking about symptoms, along with a physical exam. They might also want to test a bit of fluid from one of the blisters to confirm. Medical News Today adds that they could also do a nerve conduction study to determine the extent of damage to the facial nerve and the likelihood of recovery. 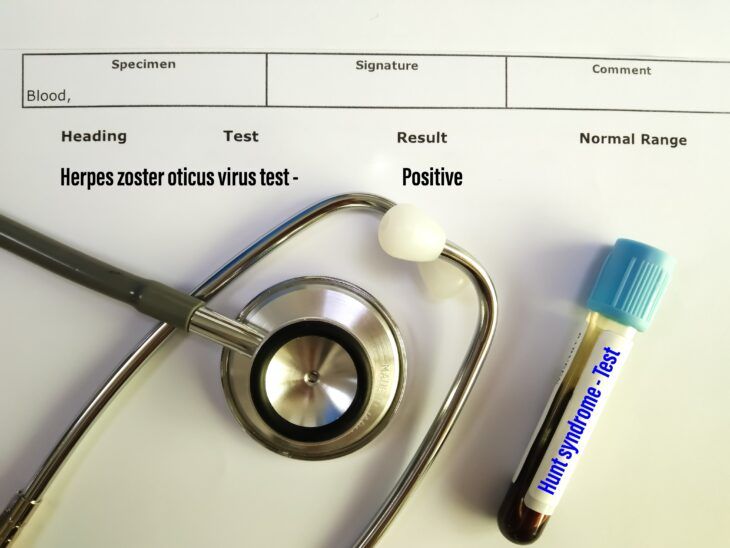 Early treatment includes the use of antiviral drugs. These can help speed along the recovery process. You might also receive a prescription for pain medicine or a corticosteroid to treat some of the inflammation and ease any discomfort from the symptoms, says WebMD.

In most cases, the infection will clear up within a couple weeks. “Some people have nerve pain from Ramsay Hunt syndrome after the rash is gone,” notes the source. And in rare cases, surgery is needed to ease pressure on the facial nerves. 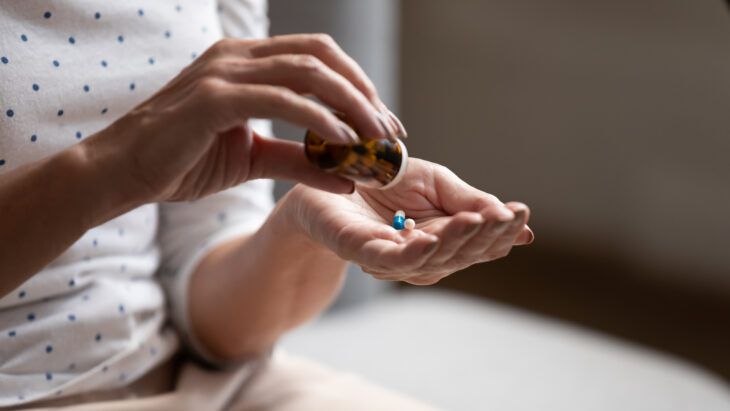 The outlook for someone with Ramsay Hunt syndrome depends on how quickly they seek treatment. If they are able to receive a fast diagnosis and effective treatment within the first few days, they’ll make a full recovery. Any damage that occurs from Ramsay Hunt syndrome is reversible, says Medical News Today.

However, if the condition goes untreated for too long there could be some permanent muscle weakness in the face and hearing loss. Healthline advises anyone who is experiencing any symptoms to contact a doctor as soon as possible. The source also notes there are vaccines for both chickenpox and shingles. Children should receive the chickenpox vaccine when they are young. People over the age of 60 should get the shingles vaccine. Both help prevent outbreaks. 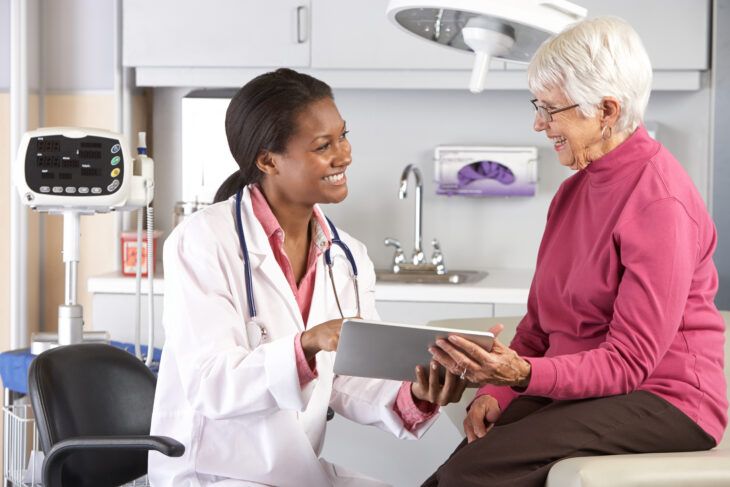 Unfortunately, there is no way to fully prevent Ramsay Hunt syndrome from happening, says Mount Sinai. The most important thing to do is to treat it with medicine soon after symptoms occur to improve recovery. 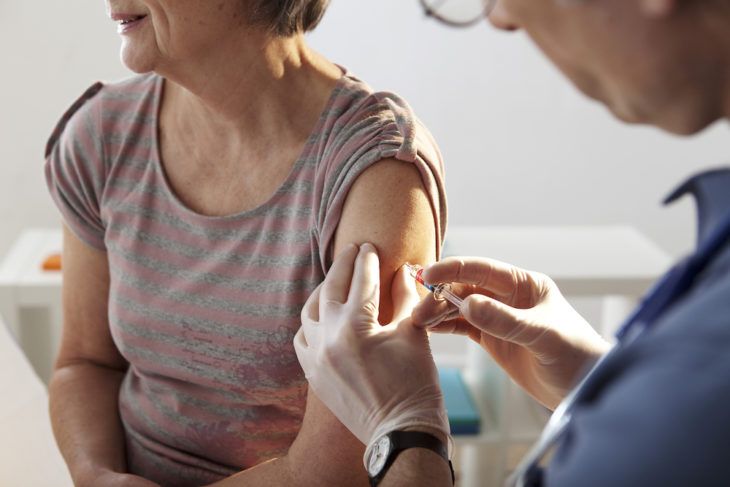