Acetaminophen May Be Linked to Infant Asthma 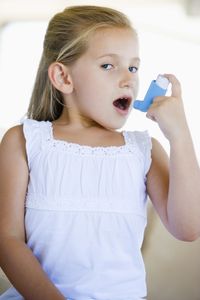 A Danish study published by the Journal of Allergy and Clinical Immunology revealed that babies given acetaminophen may develop an increased risk of asthma as infants.

The study monitored 336 children from birth to age seven, all with mothers with asthma, and all given acetaminophen (or Tylenol) for symptoms such as aches, pain, and fever. The study showed that the risk of asthma increased the more often the child was given acetaminophen during the first year of life.

Overall, 19 percent of the children had asthma-like symptoms (i.e., wheezing, breathlessness or coughing) by 3-years of age. However, the link between acetaminophen and related asthma disappeared in children by the age of 7-years or older.

“It’s too early to conclude a relationship [between acetaminophen and airway trouble],” said Senior Researcher and Professor of Pediatrics and University of Copenhagen, Han Bisgaard. “[However] the findings should encourage further research into acetaminophen promoting asthma.”

So even though the effects of acetaminophen on asthma are not completely conclusive at this point, researchers can’t ignore the fact that children with asthma tend to experience more severe respiratory infections compared to other children, and those colds often turn into bronchitis or pneumonia, which leads to the administering of acetaminophen for its fever-reducing benefits.

Bisgaard pointed to another study that showed children who were given other popular over-the-counter pain and fever treatments (i.e., ibuprofen and naproxen) also had an increased asthma risk. However, the alternative suggests that children with asthma symptoms simply need these medications more often and that’s where the link ends.

As a result Bisgaard admits that acetaminophen is a suitable treatment for urgent health issues, for instance when a child has a fever, but recommends parents use it sparingly and only in an emergency.