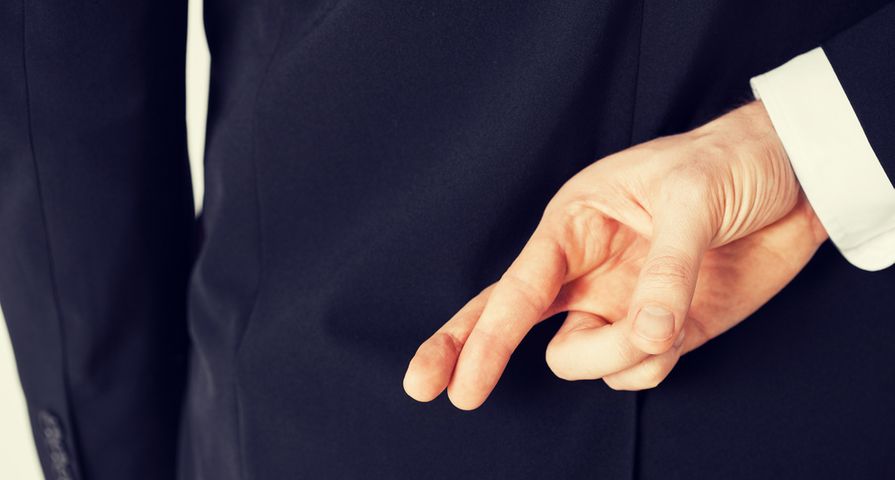 This disorder is tricky to navigate because people who have it can be very witty and charming, but will also lie and exploit others, explains WebMD. They have little regard for right and wrong making them quite dangerous. To learn more about this condition, here are the symptoms, causes, risk factors, and treatment options for antisocial personality disorder…

What is Antisocial Personality Disorder?

Antisocial personality disorder is a mental health condition that affects not only how they live their life, but how they interact and treat other people. According to Healthline it causes patterns of manipulation and violation of others around them. It overwhelms their personality and really defines who they are as a person.

This particular condition is a cluster B personality disorder which means it’s part of a group of conditions that “disrupt the emotions and lead to behaviors that many would consider extreme or irrational,” writes Medical News Today. People with ASPD will often engage in criminal behavior, show a lack of remorse, partake in irresponsible activities, and disregard the safety and choices or others, notes the source. 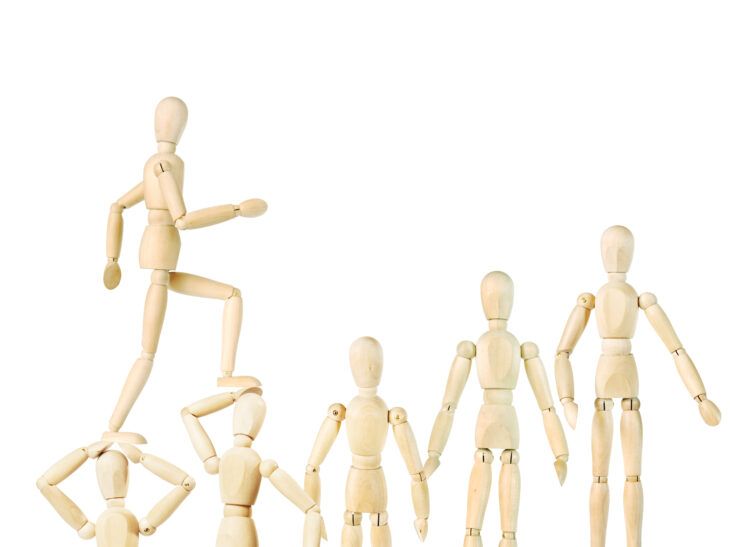 When it comes to how they treat other people, the Mayo Clinic lists the following as trademark signs of ASPD: lying and exploiting others, callous, cynical and disrespectful of others, uses charm and wit to manipulate others for personal gain or personal pleasure, repeatedly violating the rights of others through intimidation and dishonesty, lack of empathy and remorse for harming others, and poor or abusive relationships.

When it comes to how they live their life, they will likely take part in criminal behavior and have recurring problems with the law, warns the Mayo Clinic. They’ll also take part in “unnecessary risk-taking or dangerous beahvior with no regard for the safety of self or others.” They will be impulsive, unable to plan ahead, irresponsible and unable to fulfill work or financial obligations.

Lastly, people with ASPD are often hostile, irritable, easily agitated, aggressive or even violent. They’ll be arrogant and have a superior view of themselves and be extremely opinionated, says the Mayo Clinic. 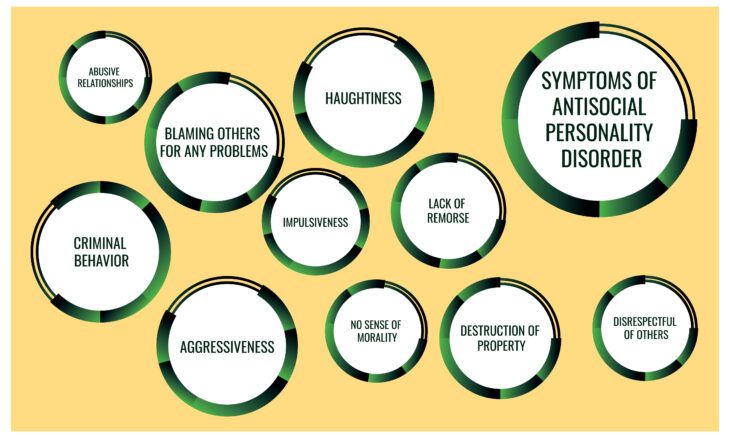 Symptoms in Adults with ASPD

An adult who is diagnosed with ASPD will have the same symptoms, but certain ones might be more obvious. For example, people with ASPD are often irresponsible. They have a hard time holding down a job for obvious reasons pertaining to many of the symptoms. But mainly because they are too impulsive, do not respond well to discipline, and lack structure. They will struggle with financial obligations so they will likely not be financially successful.

The Mayo Clinic also notes that while ASPD is a lifelong condition, some symptoms can decrease over time. The symptoms that are most likely to decrease are the destructive and criminal behavior. “It’s not clear whether this decrease is a result of aging or an increased awareness of the consequences of antisocial behavior,” writes the source. 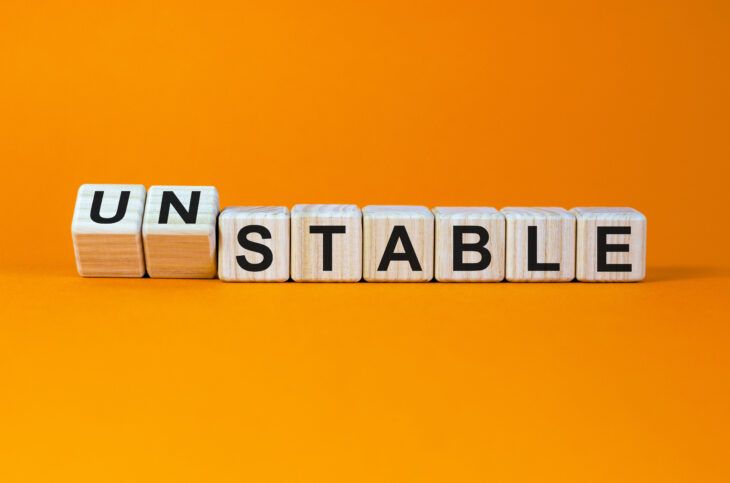 There is no single cause of ASPD, however genetics and biology definitely plays a major role. According to the Cleveland Clinic, people with ASPD often have unusual levels of serotonin. “Serotonin is a chemical in the brain that regulates our mood and feelings of happiness,” writes the source.

When it comes to genetics there is evidence that family history can impact a person’s likelihood of developing ASPD. This is especially true if there is a first-degree biological relative who has the disorder. “Research suggests that ASPD is likely strongly linked to inheritance and that environmental influences probably exacerbate its development,” writes VeryWell Mind. However, there isn’t a single genetic factor that is responsible for the condition, notes the Cleveland Clinic. 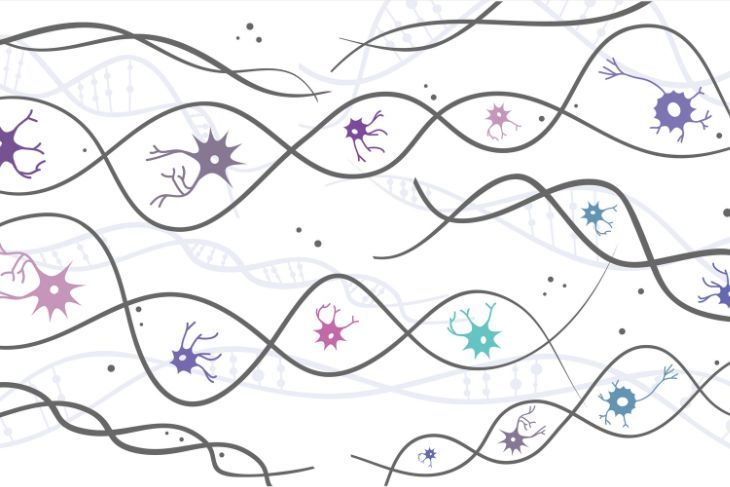 While genes make a person more vulnerable to developing ASPD, certain life situations can trigger its development. If a person experiences trauma, neglect, or abuse in their early childhood, they have a higher risk of developing ASPD. “If a child’s parents are abusive and dysfunctional, children may learn such behavioral patterns and later display them with their own kids,” writes VeryWell Mind.

Sadly, children who grow up in disorganized or dysfunctional homes have little chance to develop or learn how to discipline themselves, exhibit self-control, or simply learn empathy for others. 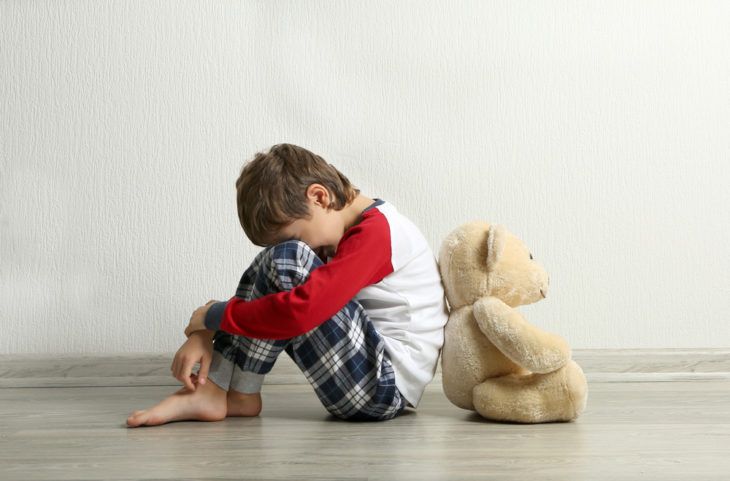 While nature and nurture play a role in ASPD, experts also found brain differences in people with this disorder. These differences are changes in brain function that may have occurred during brain development (ie. smoking during pregnancy). “Research suggests that people with ASPD have differences in the frontal lobe, the area of the brain that plays a role in planning and judgement,” writes VeryWell Mind.

People with ASPD need greater stimulation which is why they seek out dangerous situations or even illegal activities, explains VeryWell Mind. This type of behavior is enticing because it arouses and excites them. 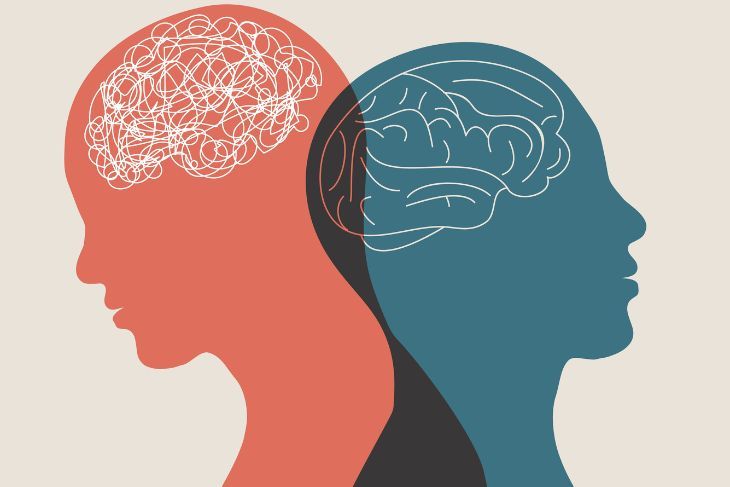 Since it’s unclear what the exact cause of ASPD is, there aren’t many known risk factors either. However, it seems to affect more men than women. A study conducted by Alcohol Research and Health found that 3-percent of men have ASPD whereas only 1-percent of women have it.

According to the Mayo Clinic, there are a couple known risk factors that can increase a persons chances of developing ASPD: 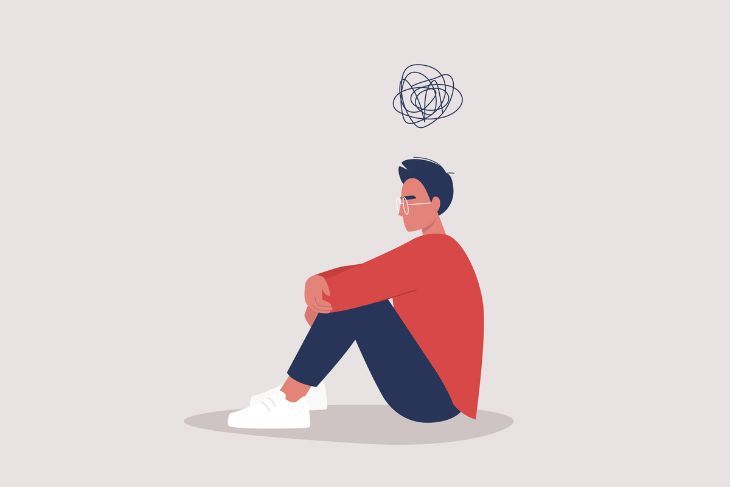 What Age Does it Show Up?

According to WebMD, the symptoms of ASPD are typically at their worst or most prevalent during the late teenage years and throughout their 20’s. But they can improve over time. If a person is showing signs prior to the age of 18, they’ll receive a conduct disorder diagnosis. The Cleveland Clinic notes that children with this disorder often life, steal, ignore rules, and bully other children.

Unfortunately, because signs of ASPD can overlap with other conditions like attention-deficit/hyperactivity disorder (ADHD), depression, or oppositional defiant disorder, sometimes parents and healthcare provides miss the signs or get a misdiagnosis. If conduct disorder is caught early enough, the Cleveland Clinic says the condition may not continue into adulthood. If it persists past the age of 18, it will be diagnosed as ASPD. 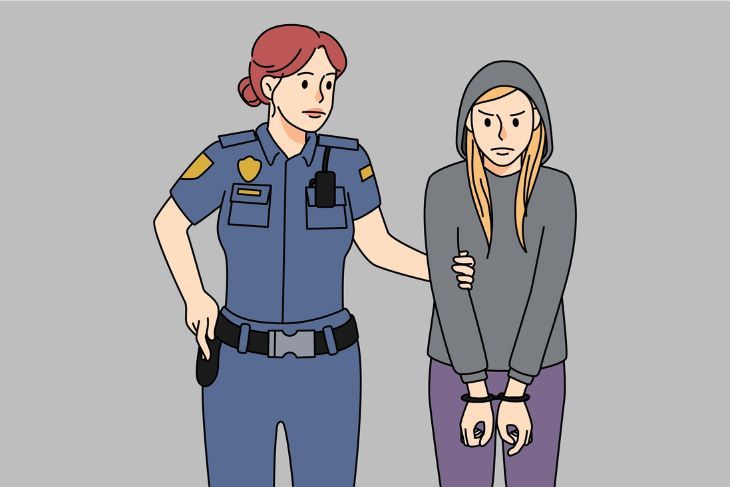 How to Diagnose Antisocial Personality Disorder

A person cannot be diagnosed with ASPD until they are 18. Healthline explains that if a child or teenager is showing signs of ASPD, they’ll receive a conduct disorder diagnosis. When diagnosing someone over 18, they must have had a history of conduct disorder before the age of 15.

During the diagnosis, a mental health provider will ask about past and current behaviors to detect any signs and symptoms, says Healthline. Certain criteria must be met before receiving an official diagnosis. They must have a diagnosis of conduct disorder prior to the age of 15, documentation or observation of at least 3 symptoms of ASPD since the age of 15, and documentation or observation of symptoms of ASPD that didn’t occur during a schizophrenic or manic episode (if they have schizophrenia or biopolar disorder).

A diagnosis is never based off one single action or a few events. Especially if these behaviors are the result of other factors like substance misuse, trauma, or cognitive disability, explains Medical News Today. Also, not all people who break the law or even violate the rights of others have a mental health condition. And not all people with ASPD will act on their emotions.

ASPD is difficult to treat for many different reasons, mainly because most people with this disorder don’t seek treatment. In fact, many never receive a diagnosis. If someone is receiving treatment, it’s likely after an altercation with the legal system.

Medication can help treat the symptoms associated with ASPD. The Cleveland Clinic says it only really helps with any aggression, depression or erratic moods they might experience. The same source lists antidepressants (regulate serotonin levels in the brain), antipsychotics (control violent behavior and aggression), and mood stabilizers (manage severe changes in mood or behavior) as the most common options. 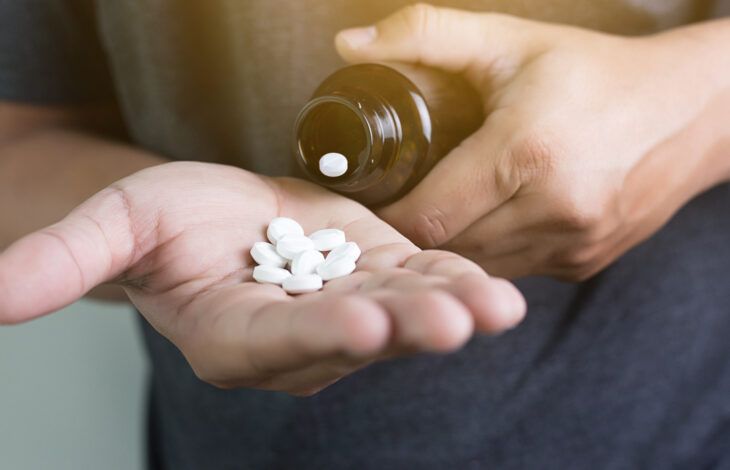 Cognitive behavioral therapy (CBT) is another form of treatment available to people with ASPD. It is a type of counselling that focuses on changing behavior and thinking, explains the Cleveland Clinic. It can help individuals think about how their behavior affects others. VeryWell Mind also points out that in order for CBT to be effective, it needs to occur after long-term treatment.

People with ASPD would also benefit from group, individual, or family therapy. “Group and family therapy as well as mentalization-based therapy, which targets the ability to recognize and understand the mental state of oneself and others, have also been studied for ASPD and show promise,” writes VeryWell Mind. 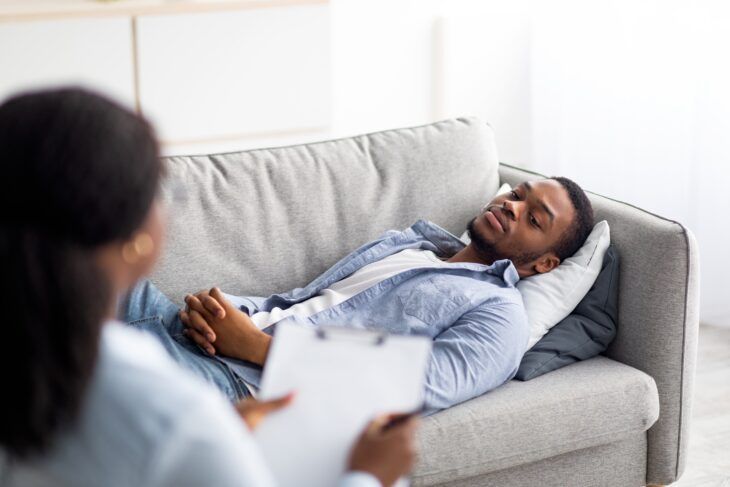 Unfortunately, ASPD doesn’t ever go away. There is no cure or successful prevention method. People with ASPD must learn to manage their condition. But it can be difficult as it has a significant impact on their ability to function in daily life. People with this disorder don’t often seek treatment on their own. It often only happens due to legal problems.

Medical and therapy will not cure the condition, but it can help cope with specific behaviors and reduce harm to others. According to VeryWell Mind, research suggests those who have the best long-term outlook are people with strong social support and better spousal or family ties. 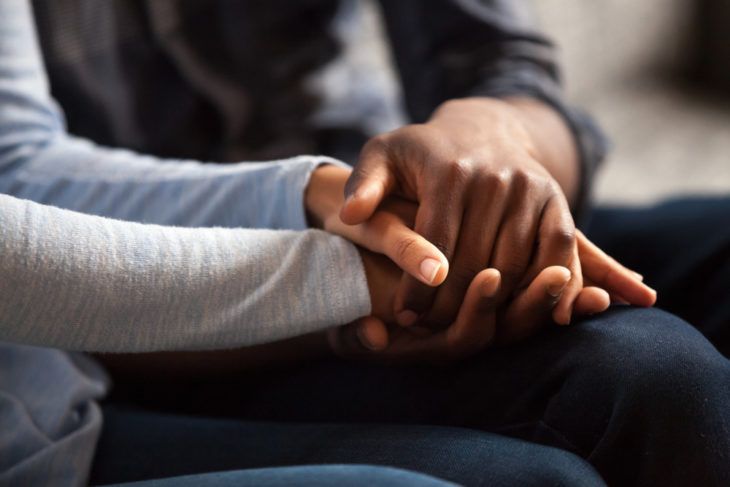