Haunted Places Around the World 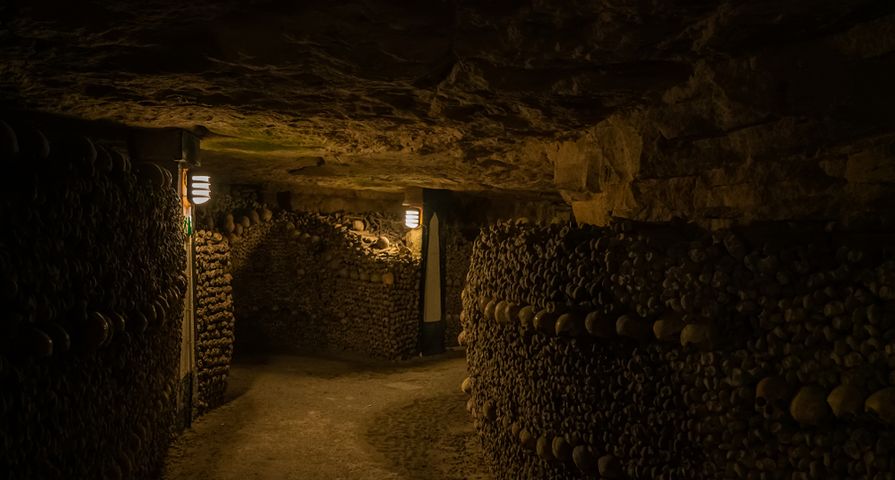 Whether you believe in the paranormal or just enjoy a good ghost story, the curiosity of the unknown has people traveling all over the globe to visit legendary haunted places. While the pasts of these locations can be grim, they all share one thing in common, they have an interesting history worth learning.

Follow along as we uncover the 12 most haunted places around the world. Be warned, these ghost stories will send a chill down your spine and if you’re brave enough, you can even check out some of these locations for yourself, but only if you dare!

Step foot in the Hoia-Baciu forest and you’ll quickly see why it’s renowned as one of the most haunted forests in the world. This forest spreads across 250 hectares in Transylvania, Romania, and boasts an eerie atmosphere. Many paranormal instances have also been reported, some even call it the “Bermuda Triangle of Transylvania.”

The forest gained interest in the 1960s when Alexandru Sift, a well-known scientist, captured a photo of an unidentified flying object hovering over the forest. My Best Place says after this incident, other unexplainable events started occurring. For starters, a shepherd and his 200 sheep suddenly went missing and were never found again. The source also says a 5-year-old girl disappeared and reappeared 5-years later without aging and wearing the same clothes. Those who were brave enough to step foot in the forest without disappearing have reported severe rashes, headaches, burns, and high fever. 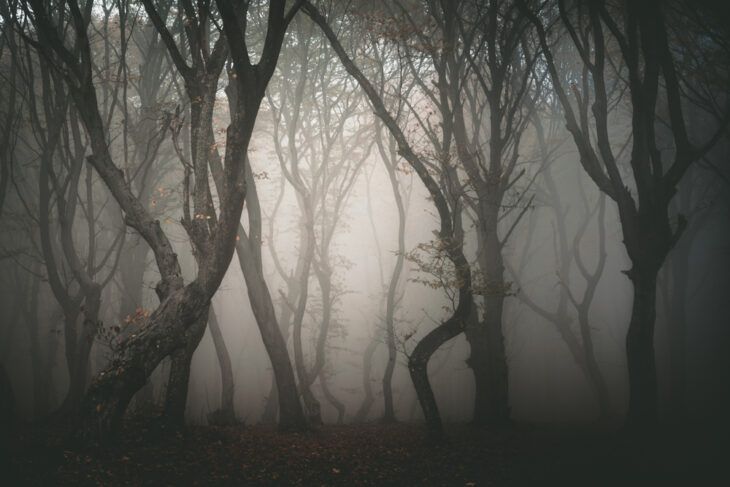 The sinister island of Poveglia lies off the shore of Venice, Italy. One look at the dark past of this European island will help you understand why it’s known as one of the most haunted places in the world. Its dark past starts in the 1300s when the Bubonic Plague ravaged Venice and Poveglia, causing the island to become a quarantine zone.

In the 20th century, the island was used as an insane asylum and it is rumored that a doctor performed strange experiments on the patients. The rumors also say the doctor eventually went mad and threw himself from the bell tower. Though the bell was removed from the tower ages ago, the locals claim they can still hear the chimes in the distance.

It’s estimated that over 100,000 people passed away on the island which may be why many believe it’s a hotspot for paranormal activity. Today, tourists and locals alike are prohibited from visiting the island. 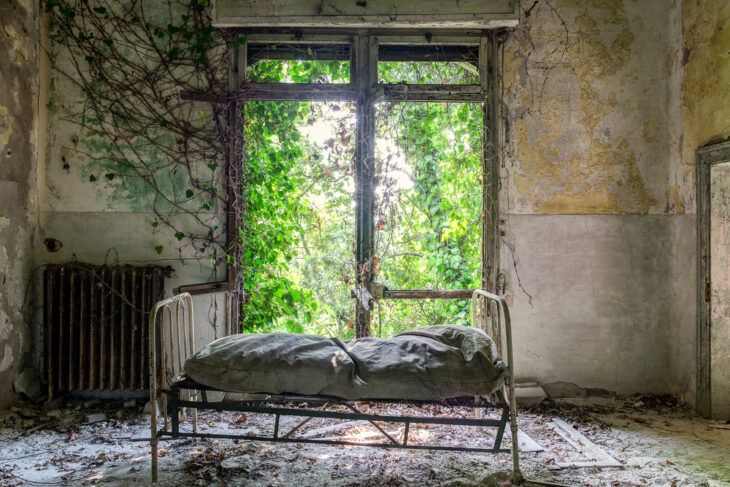 If you’re planning a trip to Argentina, be sure to visit La Recoleta Cemetery. Aside from its haunted reputation, the cemetery is quite beautiful. The gothic architecture and stone walkways are a sight to see in themselves but the cemetery also features thousands of statues and mausoleums which hold some of Argentina’s most iconic figures.

The CNTraveler says the cemetery has a few haunted legends, including the one of David Alleno, a former grave-digger, and caretaker of the cemetery. Alleno oversaw the cemetery for 30-years before taking his own life and legend has it that you can still hear his keys jangling as he walks about the cemetery. If you want to see it for yourself, the source says there are free tours in English on Tuesday and Thursday mornings but you can also grab a map and explore it on your own. 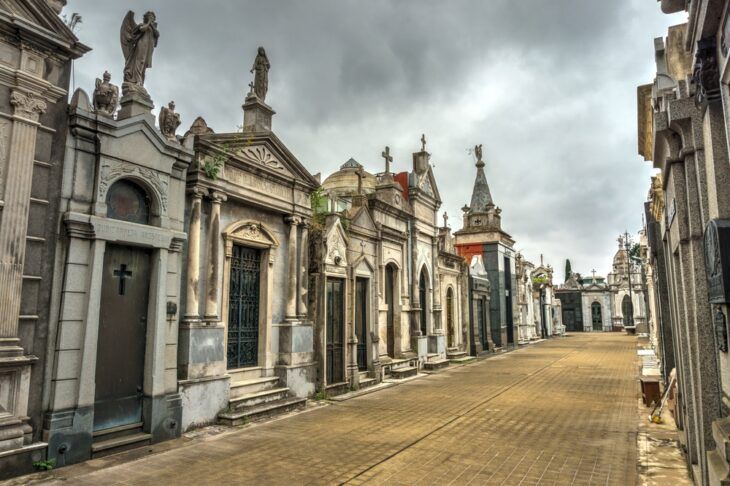 Located in Salem, Massachusetts, USA is a 400-year-old structure made of black timber. The Jonathan Corwin House, known as The Witch House is the only standing structure you can visit that has direct ties to the Salem witch trials of 1962.

During the trials, over 200 people were accused of practicing witchcraft and of that, 20 were executed. Legend has it, the 20 spirits of the trials still haunt the home. Today the home is open as a museum and you can take a self-guided tour by purchasing an admission ticket. 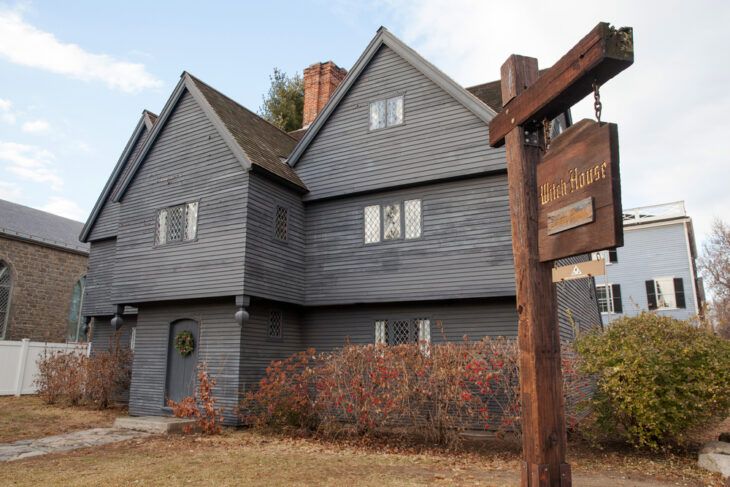 Locals and tourists alike will boast the grandeur beauty of the Fairmont Banff Springs Hotel. The stunning hotel was built in 1888 to promote tourism. The architecture along with the beautiful landscape of the rocky mountains and lush forests is enough to make this a bucket list destination. But before you go, you should know the hotel is reportedly haunted.

The hotel has a few ghost stories and the Ghost Bride may be the most well-known. The story goes that in the 1930s a bride was ascending the marble steps of the hotel to join her loved ones when she was met with her tragic fate. She reportedly haunts the hotel to this day.

A more friendly ghost, known as Sam the bellman who passed away in 1975 reportedly helps guests who are locked out of their rooms. Ro0m 692 is also said to be haunted. Previous guests have said they felt cold or a presence in the room. Because of this, the Calgary Herald says the hotel staff won’t book women traveling alone in that room. 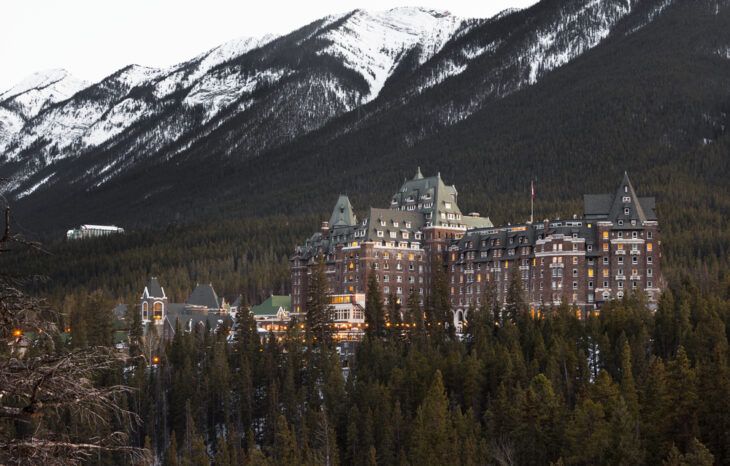 Aokigahara, also called the Sea of Trees, is a famous forest located in the northwestern region of Mount Fuji on the island of Honshu, Japan. Though the lush forest is beautiful, it’s also eerie and has a tormented past.

The forest is thought to be haunted because it’s a place where many people have taken their own lives. In fact, the CNTraveler says 247 people attempted to take their own lives in the forest in 2010 alone. The source says, “Some blame this trend on the forest’s association with demons in Japanese mythology.” Others believe it’s because people can easily get lost due to the density of the trees and muffled sounds. The forest is also supposedly sprinkled with clothing and letters making it even eerier. 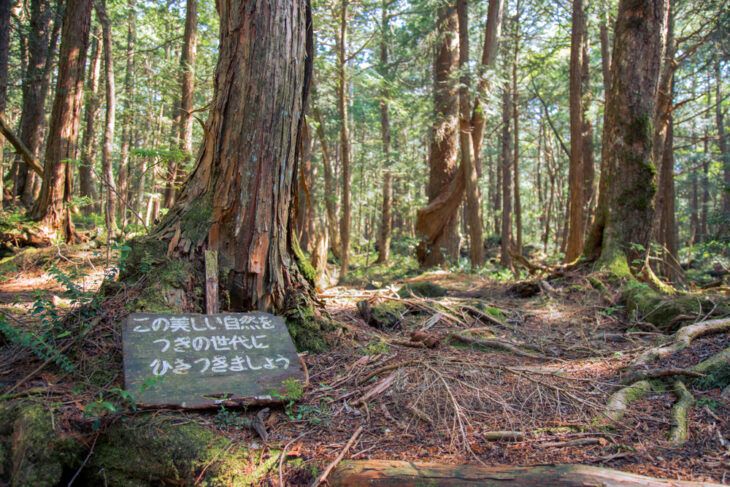 As you stroll the iconic streets of Paris, France, you should know there are paths of darkness lurking below. Not just any paths though, these are underground ossuaries that hold the remains of more than six million people! This tunnel system is known as the Catacombs which was built to consolidate the ancient stone quarries.

There are many bone-chilling legends of the catacombs. One of the scariest legends takes place in the 1990s when a group of cataphiles (individuals who explore the Catacombs regularly) were walking the dark tunnels and stumbled upon a video camera. Shockley, the camera still worked and contained footage of a solo explorer who seemed to be lost and possibly going mad. There were disturbing sounds in the video and then it ends abruptly as the man drops the camera to the ground. To this day, no one knows who it was or if he made it out.

Another legend says if you’re in the Paris Catacombs after midnight, the walls will begin to speak. The voices will try to persuade you to explore deeper into the tunnels until you can’t find your way out.

Most entrances have been closed off to the Catacombs but if you’re brave, a section does remain open to the public, called the Ossuary of Denfert-Rochereau. Take a guided tour and see it for yourself! 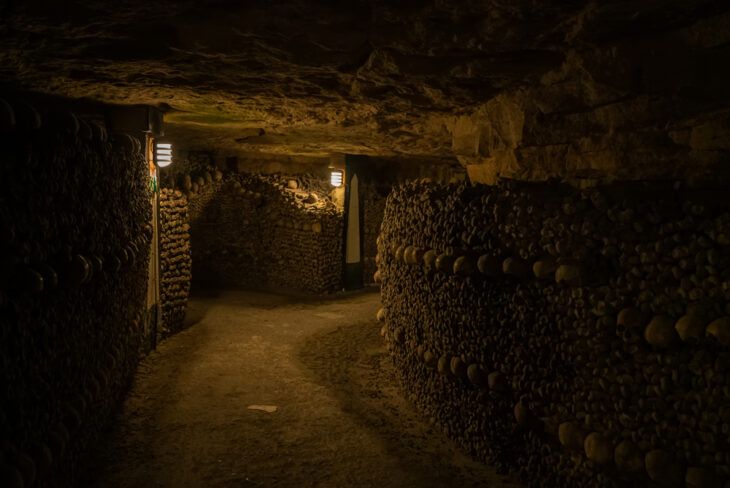 Head just shy of 200-miles from Delhi, India and you’ll arrive at the Bhangarh Fort. These lush ruins boast a stark contrast to their desert surroundings. The ruins themselves are quite beautiful but CNTraveler says the oasis remains mostly uninhabited due to an alleged curse.

The legend says a sorcerer cast a curse on the area after he was rejected by the princess. What is even more unsettling is there are warning signs on the property telling you not to stay there after sunset, in fact, it’s forbidden. Reportedly the locals say anyone who managed to get inside after dark, never returned to tell their tale. Legend has it, spirits roam the ruins at night. 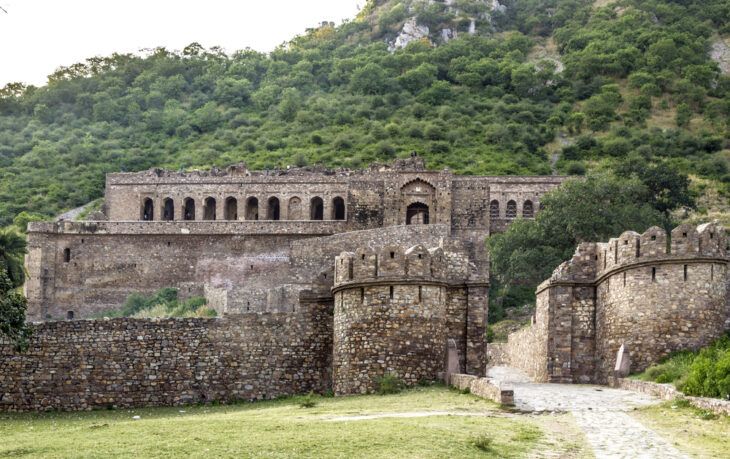 Not only were the prisoners left to live, eat, and exercise alone, but if an inmate needed to leave their cell, a guard would cover their head so they couldn’t see or be seen. Reportedly it’s a paranormal hotspot too and some visitors claim they have heard laughter or pacing footsteps when no one was around, and some say they’ve even seen shadowy figures. Today the prison is open to the public and offers both daytime and nighttime tours, as well as special Halloween celebrations. Located in Victoria, Australia is the largest abandoned asylum known as the Ararat Lunatic Asylum or Aradale. The asylum opened in 1867 “to accommodate the growing number of ‘lunatics’ in the colony of Victoria, ” explains Aradale’s official website. The source says at its peak, the asylum homed up to 1000 patients where they eventually met their fate.

The complex consists of 70 historic abandoned buildings and there are 2 sister asylums nearby. Today, Aradale offers frequent ghost tours that take you through the complex where you can explore the chapel, wards, kitchen, and even the morgue. 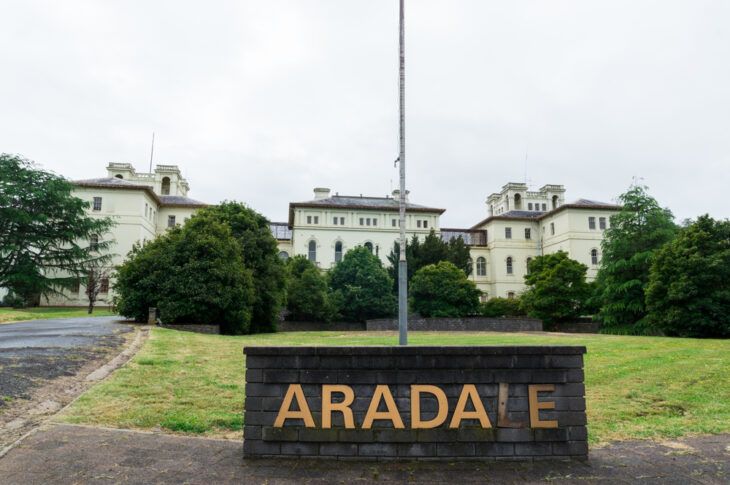 There are tons of things to see and do in Beijing, China, but if you like history and ghost stories a visit to The Forbidden City is a must! The Forbidden City was built in the 1400s as the former Chinese imperial palace but today it’s a museum.

While the palace is full of history, it’s also a paranormal hotspot and it’s no wonder why. Many executions took place over the years and some believe the spirits haunt the premises. When the palace opened to the public in the 1940s, strange things started happening. Some have spotted a woman dressed in white strolling the grounds while sobbing. Others have seen a woman dressed in all black but the eerie thing about these sightings is the woman reportedly has no face. 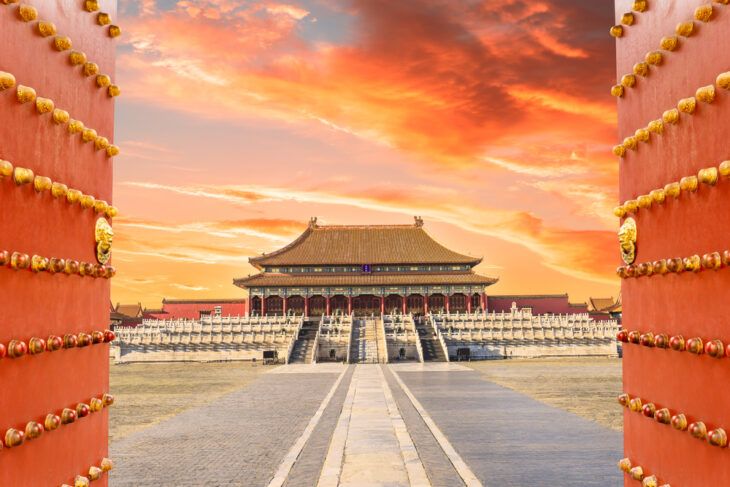 The Château de Brissac is a stunning castle located in Brissac-Quincé, France. Although beautiful and known as the tallest castle in France, it does have a dark past and ghosts may roam the halls.

Perhaps the most famous story is that of “The Green Lady” which is the ghost of Charlotte of France. The legend says, Charlotte (the illegitimate daughter of King Charles VII) was murdered by her husband after he found out she was having an affair. Some say they spotted the Green Lady roaming the chapel’s tower while others have heard her moaning early in the morning. 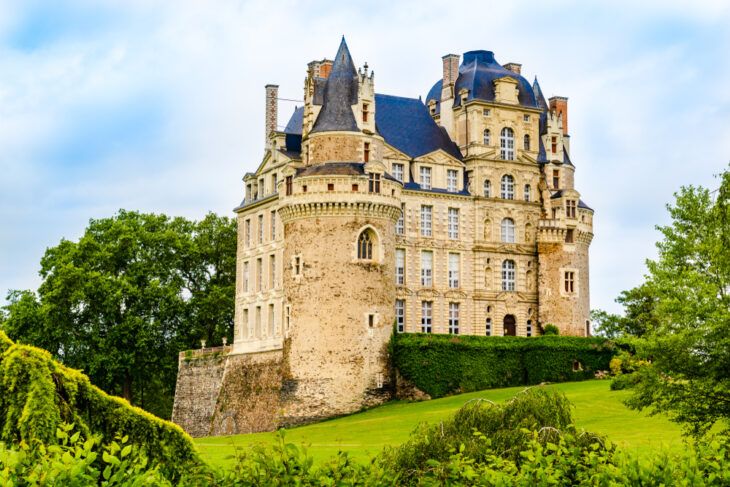