Creepiest Places Around The World 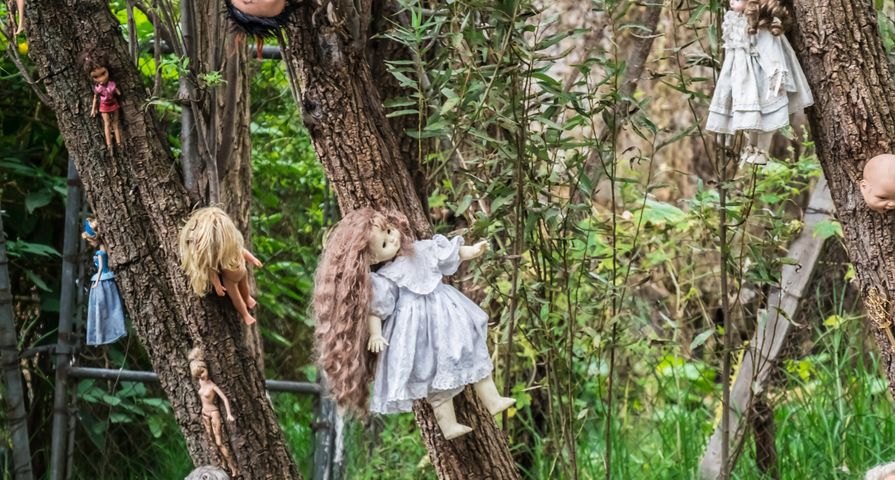 Our planet is a marvellous wonder with so much to explore and see, but there are also some truly creepy places. Most of these destinations are popular with tourists who are looking for a spooky adventure. What makes them truly creepy is the realness behind them. All of these places have strong historical roots with lots of culture which means they have been well preserved by locals.

You might enjoy travelling and even a scary movie from time to time, but trust us when we say, these destinations are not for the faint of heart! From a church made out of human bones to a tiny village filled with life-sized dolls, come join us as we travel to some of the creepiest places around the world.

The Igorot people live in a remote village nestled in the Cordillera Central mountains in the Philippines. Travel here and discover an ancient burial ritual that is both haunting, and remarkable. According to BBC Travel, the elderly carve their own coffins and paint their names on the side. When they pass away, they are placed inside the coffin and then nailed or hung to the side of a cliff.

This practice is believed to date back 2,000 years and allows the deceased to be closer to their ancestral spirits. Before a corpse is put in the coffin, they are placed in a wooden chair, “tied with leaves and vines and covered with a blanket.” The body is smoked to delay decay so relatives can pay their respects. Afterwards, men install metal pegs into the cliff face to suspend the coffin in its final resting place. Mourners then come and let fluids from the decomposing body drip onto their body believing it will bring them good luck. 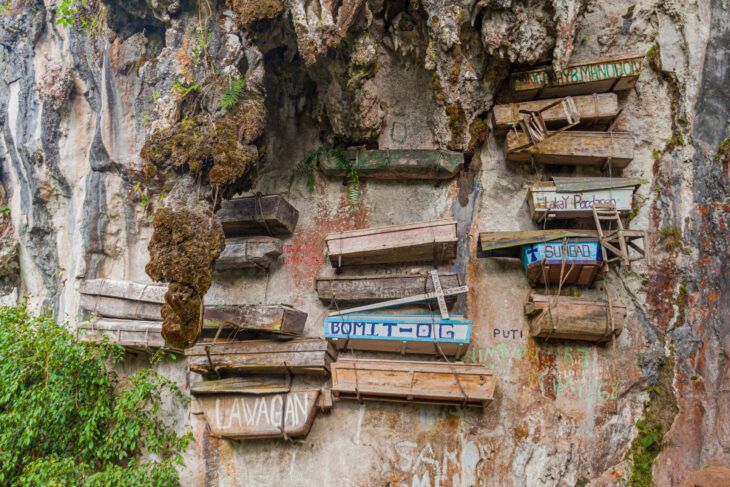 No children live in this rural village in Japan, but there are hundreds of life-size dolls. Only 30 people reside in the village of Nagoro. All of the residents are adults. The population is rapidly shrinking and aging due to dwindling employment opportunities and an inconvenient lifestyle. The lack of children inspired local resident Tsukimi Ayano to begin handcrafting dolls which now outnumber the residents 10:1.

You can find 400 hundred large dolls (and counting) throughout the village. Some people see it as a cheerful way to bring life back to the remote village. Others might find it a little creepy, especially since many of the dolls bear a striking resemblance to deceased residents. Some of the dolls are even wearing their clothes! The dolls have been strategically placed throughout the village — fishing on riverbanks, sitting at desks in the school, or waiting for the bus. 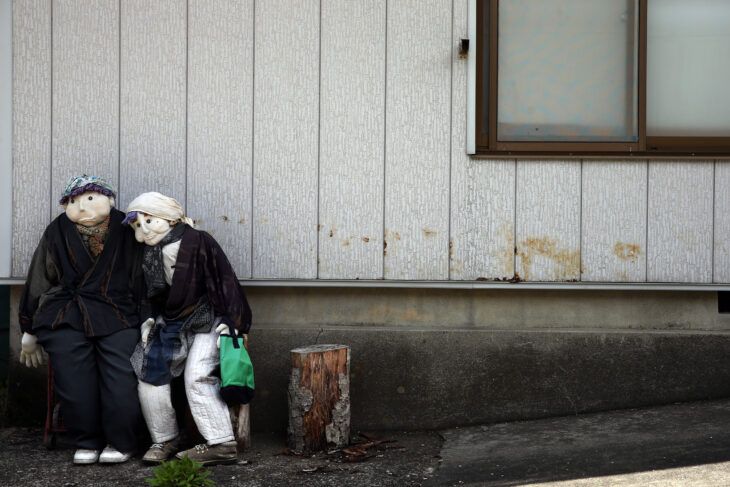 Churches are always a popular tourist attraction thanks to their history and culture, and St. George’s church in Czech Republic is no different! This church was built in 1352 but has been abandoned since 1968 when the roof collapsed during a funeral. It lost a lot of its lustre because people believed it was haunted, so it was never restored and left to the elements.

In 2012 a local resident, Petr Koukl volunteered to take care of the property. To raise the funds needed to repair the church he partnered up with a student named Jakub Hadrava who created an installation in the church as part of his thesis for art college. The art installation features plaster models of real people. He then covered them with sheets and placed them in the church. The ghosts have ironically brought the church back to life as a popular tourist attraction. 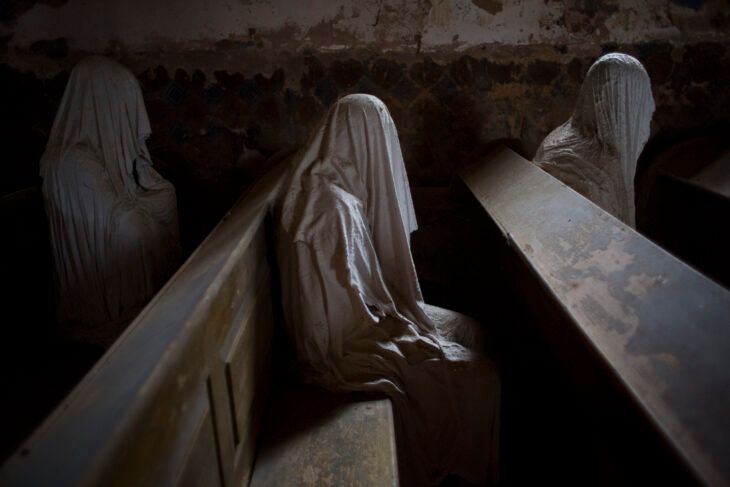 We’ve heard of eerie ghost towns and abandoned ghosts towns…but ever seen a smouldering ghost town? Centralia was once a bustling small town with a rich history and a booming economy thanks to local coal mines. Sadly, it all came to an abrupt end in 1962 when a fire started at the Centralia landfill. It quickly spread to the mine tunnels beneath the town and continues to burn today.

There have been many efforts made to extinguish the fire, but all of them have failed. There are so many abandoned mine tunnels in the area that continue to fuel the fire. Coal mines were closed due to unsafe carbon monoxide levels, homes began to tilt, and even today smoke continues to waft through sink holes and cracks along the highway. The town had to be evacuated and only seven residents remain who refuse to leave. 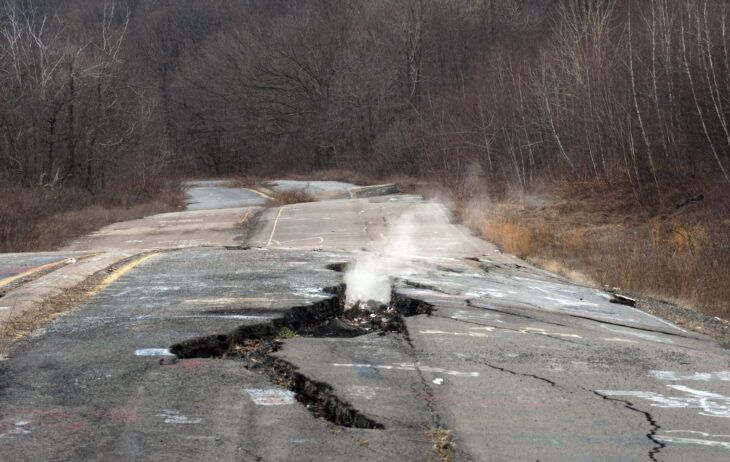 Mexico has long been a popular destination for tourists and a secluded island off the coast of Mexico sounds like paradise! But what if it was covered in hanging dolls? Isla de las Munecas (“The Island of Dolls”) is just south of Mexico City in the Xochimilco channels. The surrounding area is populated, but the island itself is largely deserted, except for hundreds of hanging dolls. Some of the dolls are unclothed with eyes that move, possessed by the spirit of a girl who drowned on the island.

The man behind these dolls is Don Julian. He came to live here in the mid-20th century and considers himself the islands caretaker. According to Discovery, after moving here he found the body of a young girl who drowned. Shortly after, a doll came floating down the canals. He hung the doll from a tree to appease her haunting spirit and continued to do so for the next 50 years. 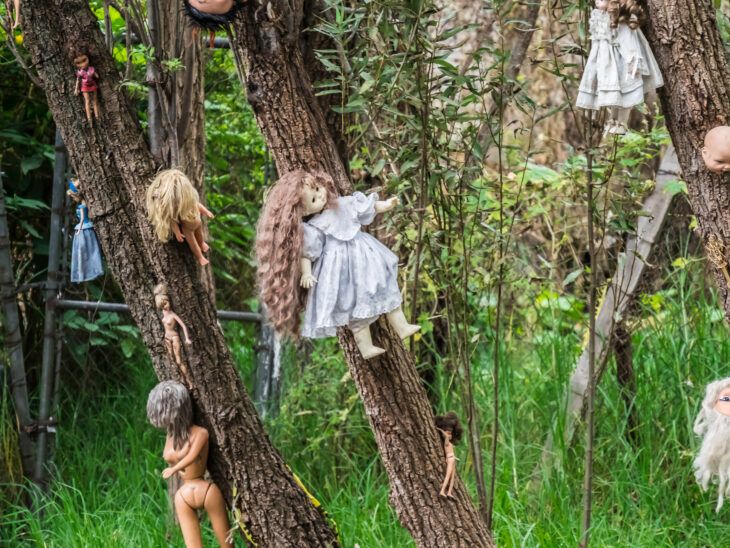 The Hill of Crosses, Lithuania

While the Hill of Crosses is meant to be a symbol of faith, hope, and freedom, thousands of crosses crowded together on a hill does have a certain spookiness to it. People have been placing crosses on this hill since the 14th century. According to Conde Nast Traveler, during the medieval period, the crosses were a way for people to symbolize their desire for Lithuanian independence. After an uprising in 1831, people began adding crosses for loved ones who passed.

Between 1944 and 1991 it became a place of defiance against the Soviet occupation. Authorities kept removing them. They tried to bulldoze them and even burn them down, but locals kept replacing them. Today, there are now more than 100,000 crosses there and when the wind blows they all clash together like one giant eerie wind chime. 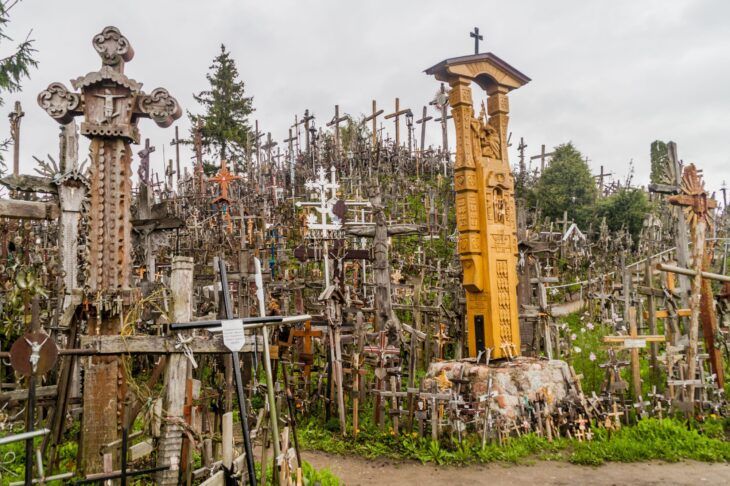 There are many catacombs around the world, but the Capuchin Catacombs of Palermo are by far the creepiest. The space was built in the late 16th century for religious men when the cemetery at the Capuchin monastery became overrun. However, as word of the natural mummification process spread, it quickly became highly sought after final resting place for local residents.

Thousands of people were buried here, “for eternal display in the wall niches of the underground cemetery,” explains the Palermo Catacombs website. Since closing in 1880, the underground tombs now hold 8,000 corpses, all on display in their best clothes like an exhibit of the dearly departed. 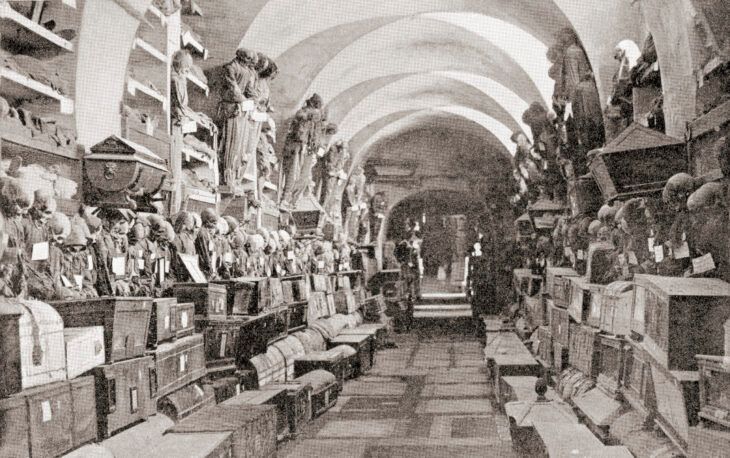 At first glance this looks like a quaint little village nestled into the hillside. However, the reality is much creepier! Referred to as the “City of the Dead” located just outside the remote Russian village of Dargavs is a medieval necropolis. These quaint little “homes” are actually crypts containing skeletal remains and the belongings of the deceased.

This ancient burial ground holds the remains of more than 10,000 people, writes BBC Travel. Some locals believe that anyone who is brave enough to venture in here won’t return alive. What’s even creepier is that there’s a lot of mystery surrounding this graveyard and its exact origins are still unknown. 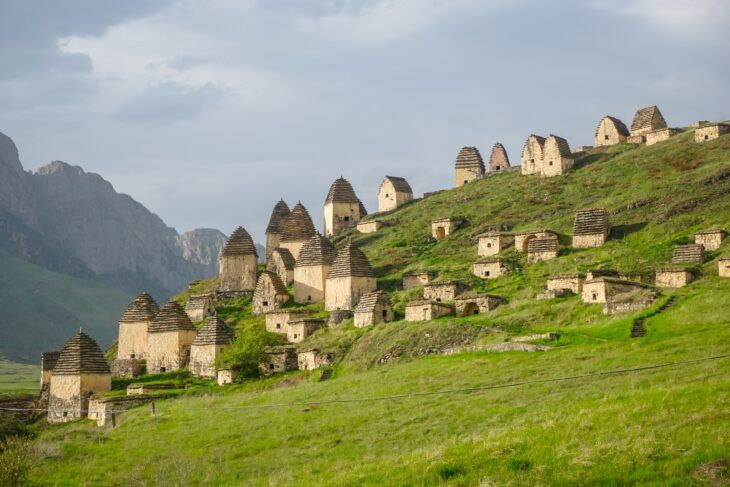 When most people think of a children’s amusement park they think of cotton candy, carnival games, and rollercoaster rides. It’s a stark contract at Singapore’s Haw Par Villa! Built in 1937 by Aw Boon Haw, this theme park was built on Asian culture, philosophy, and religion. The park is full of bright colors and large sculptures. According to the park’s website it’s Singapore’s largest outdoor gallery.

One specific area of the park is particularly creepy! The underworld-themed Ten Courts of Hell is made up of over 1,000 statues. All of which are very, very strange. It was created to “teach young children about morality, the dioramas portray severe modes of punishment, accompanied by a placard explaining the sin that warranted such lashing,” writes Conde Nast Travel.

While this part of the park is open to children, it’s not recommended for children under the age of 9. Some of the displays are particularly gruesome with people getting cut in half, dismembered, and even thrown onto a hill of knives. 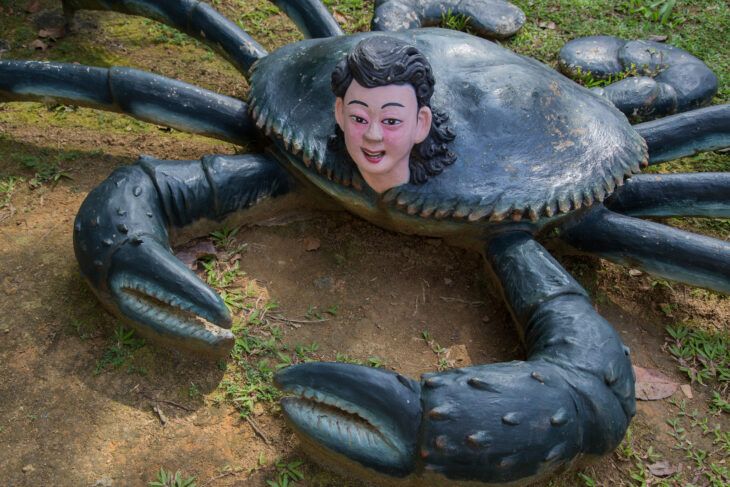 The Sedlec Ossuary is so creepy it’s referred to as the “church of bones,” and for good reason! It’s literally made out of human bones. The small chapel is located beneath the Cemetery Church of All Saints. Within this monastery are 50,000 human skeletons, writes Architectural Digest. The land underneath this church is considered to be holy because back in the early 1300s, an abbot of the Sedlec Monastery scattered holy soil from Jerusalem on the church’s cemetery, according to Conde Nast Travel.

This made it a popular burial site which led to overcrowding. To make room for new bodies, the old ones had to be dug up. In 1870 a local Czech woodcarver named Frantisek Rint was hired in to turn the bones into art. After disinfecting and bleaching them first (of course), he then crafted them into chandeliers, candelabras, candleholders, and more. 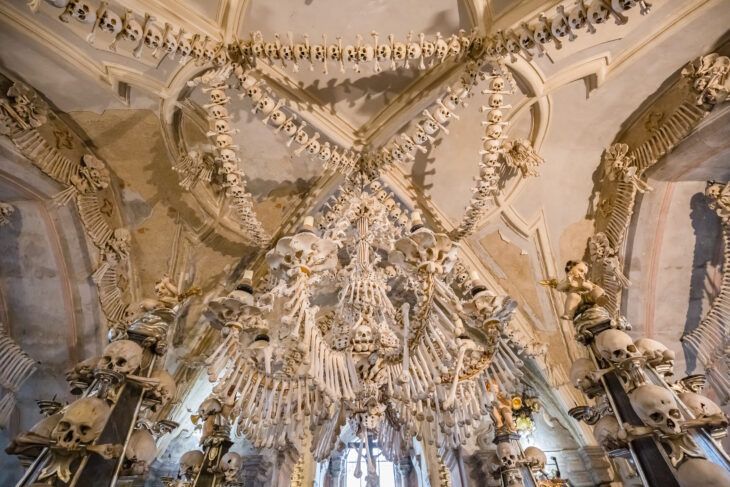 Some people might think cemeteries are beautiful, but this one in Buenos Aires, Argentina is seriously haunted. Even the city’s tourism website calls it a “labyrinthine city of the dead” and totes it as being eerily beautiful. It’s home to over 6,400 statues, sarcophagi, coffins, and crypts holding some of Argentina’s  most celebrated sons and daughters.

Of course, it wouldn’t be a cemetery without a ghost story. La Recoleta’s ghost story centers around David Alleno who worked as the cemetery grave-digger for 30 years. Throughout his time working here he saved his money so that he could purchase his own plot and statue. According to the story, as soon as the architect finished his statue, he left work and took his own life. According to the city’s tourism website, people who wander through the cemetery at dawn can still hear his keys jangling as his ghost walks the narrow paths. 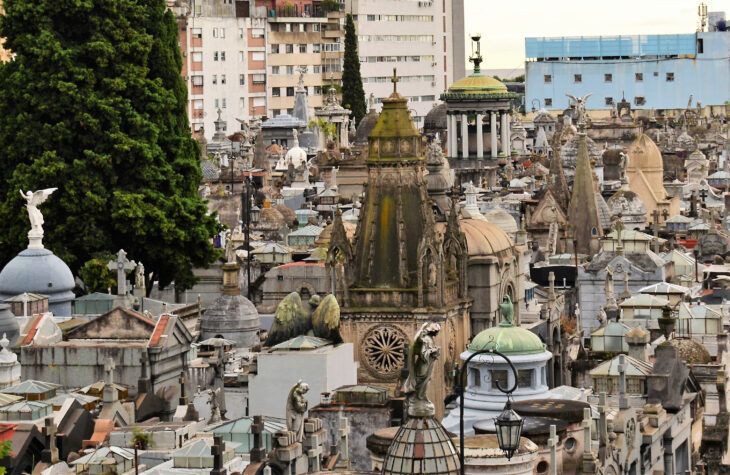 The Door to Hell, Turkmenistan

Do you believe in heaven or hell? You might after seeing this creepy place! What locals refer to as “the Door to Hell” lies in the Karakum Desert in Turkmenistan. And it’s just as scary as it sounds. In 1971 Soviet geologists were drilling for natural gas reserves when they came upon this 230-foot wide crater of methane gas.

In an attempt to protect nearby villages they decided to set it on fire to burn away the hazardous gas. Unfortunately, it ended up fuelling the fire and is now an unending supply of gas, writes Bustle. The flames have been continuously burning for the past 45 years. 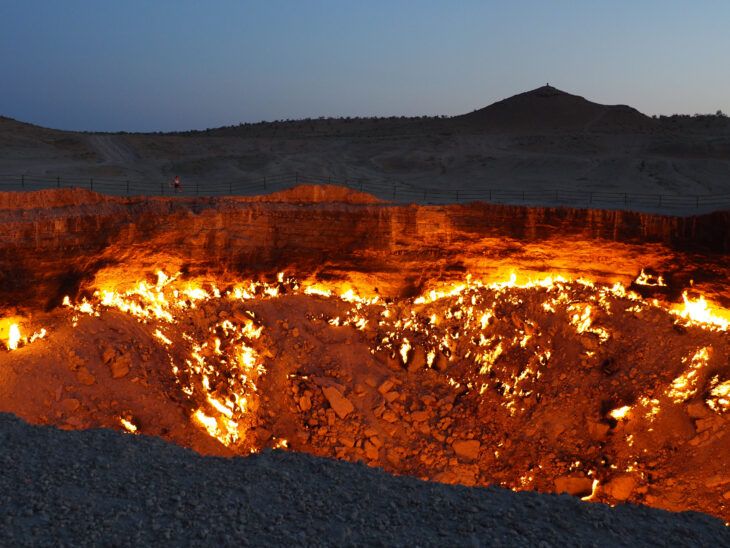