12 Things To See and Do in Virginia 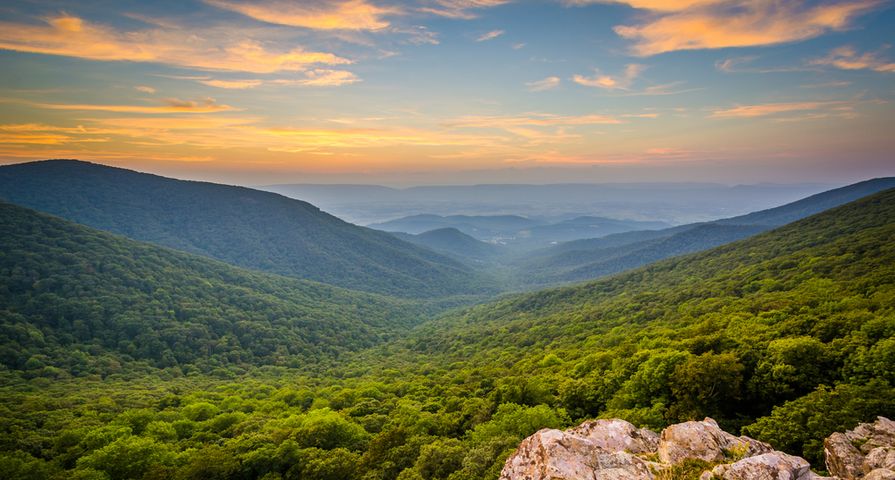 Virginia is a charming southern state with a rich history dating back to the first official settlement on what’s now American soil. Despite being one of the first settled areas, Virginia has held onto much of its natural beauty and boasts one of the oldest natural historic sites in the nation. This “for lovers” states is a must-visit destination if you enjoy being in nature, exploring history or simply slowing things down.

Ready to start planning your trip? Here are 12 things to see and do in Virginia.

Shenandoah National Park is a nature-lover’s paradise, located less than 100 miles outside the bustling city of Washington, DC. The park features over 200,000 acres of wildflower fields, wooded hollows and cascading waterfalls.

In addition, these protected lands are home to a diverse group of animal species, including black bears, deer and beautiful songbirds. While some people opt to take the Skyline Drive through this park, there are ample opportunities for hiking if you want to get more up close and personal with all the Shenandoah Valley has to offer. 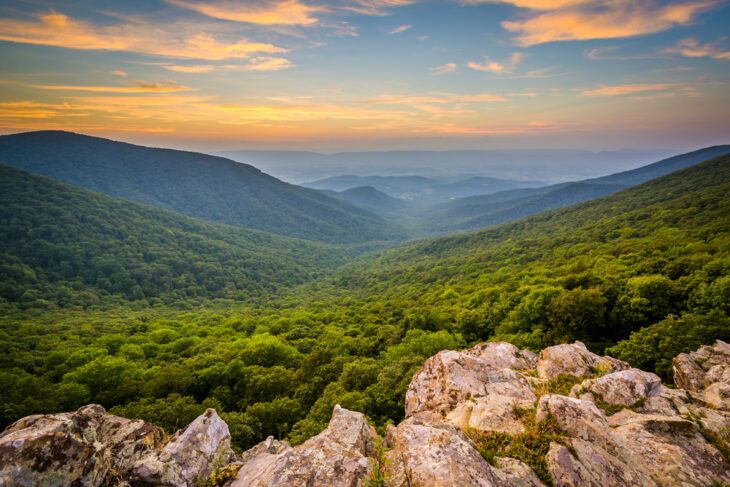 If you’ve ever wished to take a literal step back in time, Colonial Williamsburg is the perfect place for you. The entire town has been set up as an 18th-century village, and historically accurate actors play the parts.

As a result, you’ll have the opportunity to get a first-hand look at what life was really like during the earliest years of America’s European settlement. You can explore Colonial Williamsburg on your own or take a guided tour. If you get hungry, there are plenty of eateries nearby. 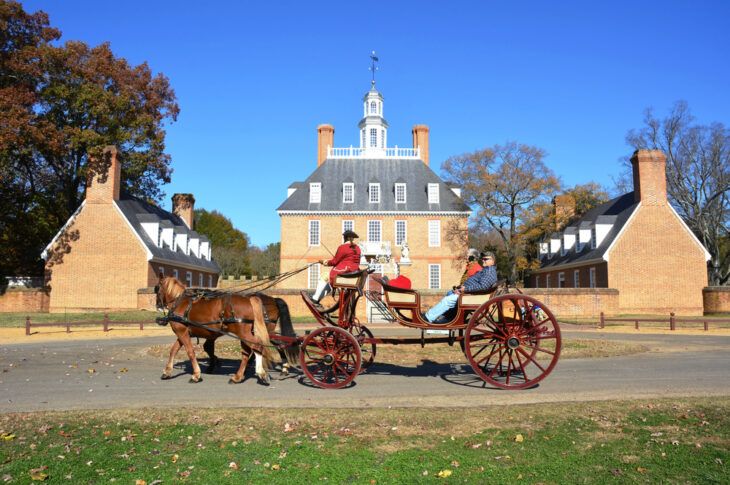 Families will adore the Virginia Aquarium and Marine Science Museum, which features numerous underwater exhibits for an affordable price. You can get up close and personal with the touch tanks or watch divers in the larger tanks.

Some exhibits explore the lands off the coast of Virginia. Other exhibits are more exotic, such as the shark tanks and sea turtle displays. You can also learn more about how marine animal strandings are handled and why these rescue missions are so important. 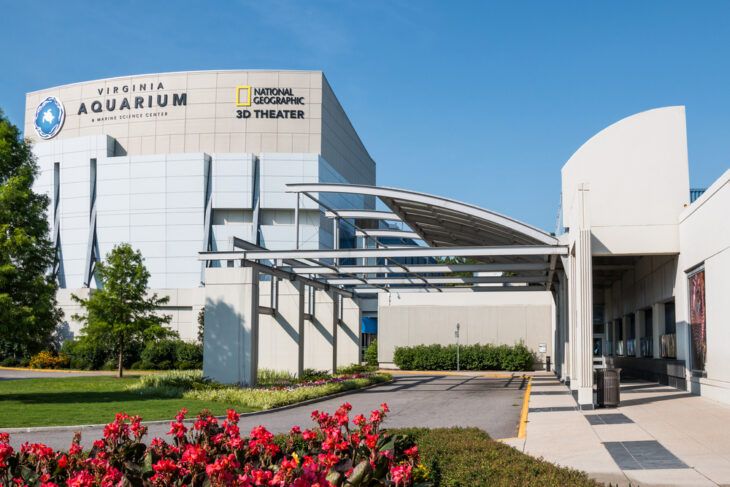 4. The Tomb of the Unknown Soldier

The Tomb of the Unknown Soldier is a patriotic landmark in Arlington National Cemetery. This site houses the bodies of four unidentified soldiers killed in battle overseas. Each soldier has come from America’s largest wars, including World War I, World War II, Vietnam and the Korean War.

The Tomb of the Unknown Soldier represents all those soldiers who were lost in battle and never properly identified. Numerous people pay their respects to the unknown soldiers who died in the service of their country every day. 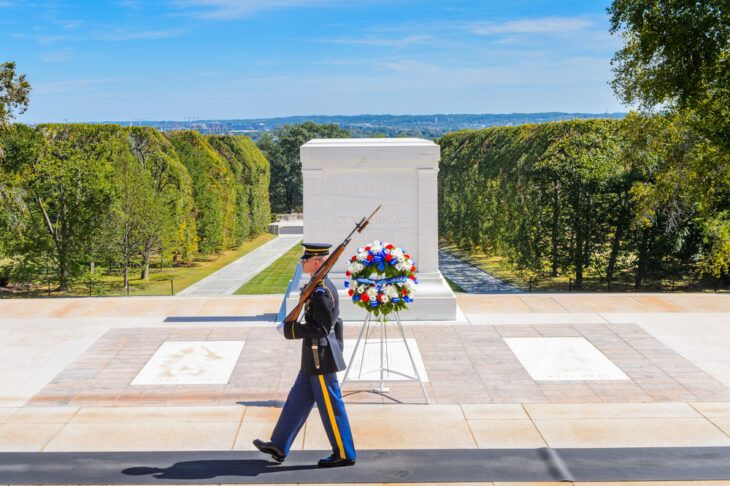 Luray Caverns have been more than 4 million years in the making and have rightfully earned their title as the largest and most popular caverns in the eastern United States. An hour-long tour takes you through the caverns to experience the unique formations, diverse natural coloring and crystal clear pools.

However, the most memorable part of your tour is experiencing the world’s largest musical instrument, The Great Stalacpipe Organ. This unique instrument uses the surrounding stalactites to create a haunting melody you won’t have the chance to experience anywhere else on Earth. 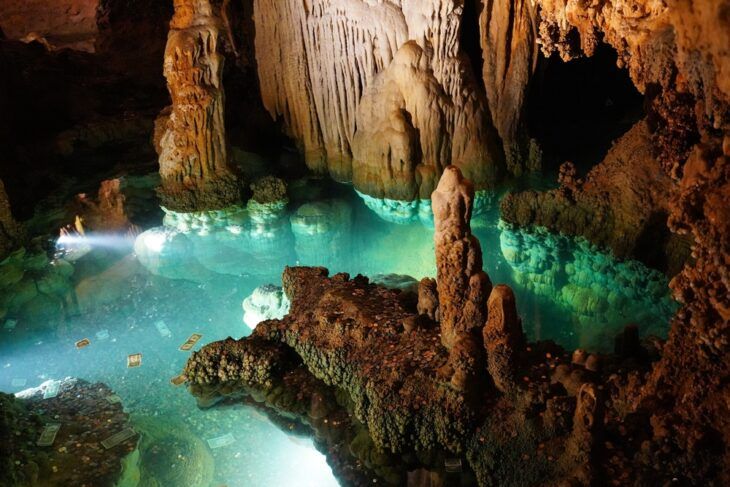 If you’re a history buff, Colonial National Historic Park is one stop you don’t want to miss on your next Virginia trip. The park is home to two of America’s most significant historical sites.

The first of these sites is Jamestowne, the first permanent English settlement in North America. Jamestowne was settled in 1607 and lasted until around 1610. The second site is the Yorktown Battlefield. The final major battle of the American Revolutionary War was fought on this battlefield in 1781. 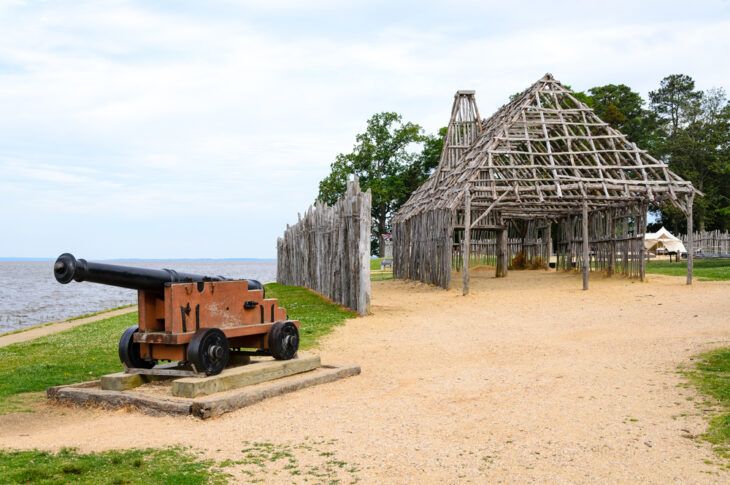 During your trip through Virginia’s Shenandoah Valley, leave time to visit the National Bridge of Virginia. This historic landmark was shaped into a natural bridge over hundreds of years from solid limestone rock and, at one time, was owned by Thomas Jefferson. A young George Washington once surveyed the land himself.

You can take a scenic trail beneath this huge archway and walk alongside Cedar Creek, which features a small but beautiful cascading waterfall. There are plenty of opportunities to see natural flora and fauna during your hike. 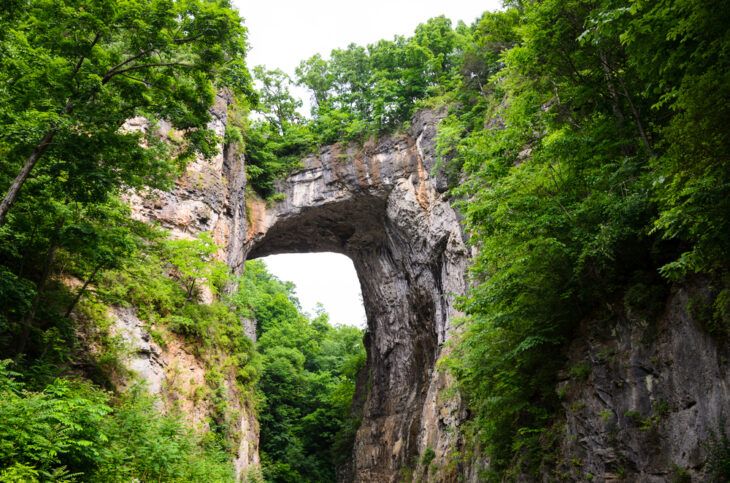 The Natural Bridge Caverns were opened to the public in 1977. As a result, you have the opportunity to go more than 34 stories below the Earth’s surface to witness unrivaled natural beauty. The caverns have numerous unique features that make them a noteworthy addition to your Virginia trip’s to-do list.

An enormous domed room, a massive underground lake and the Well Room are only a few things you’ll experience. A wealth of stalactites and stalagmites is worth looking at as you take a 45-minute tour through the caverns. 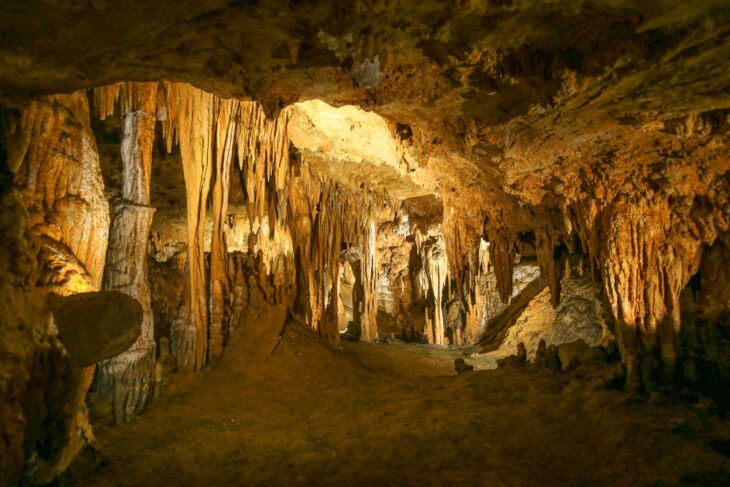 The wild horses are Assateague Island National Seashore‘s biggest draw. The horse herd roaming Assateague Island is one of the last wild herds in America, and people come from all over to watch them play in the wild.

This national seashore also provides opportunities for hunting, fishing, kayaking and camping for those who want to go off the grid for a few days. However, check current conditions before planning your trip to the island. The shoreline and weather can change quickly in this unsettled wilderness. 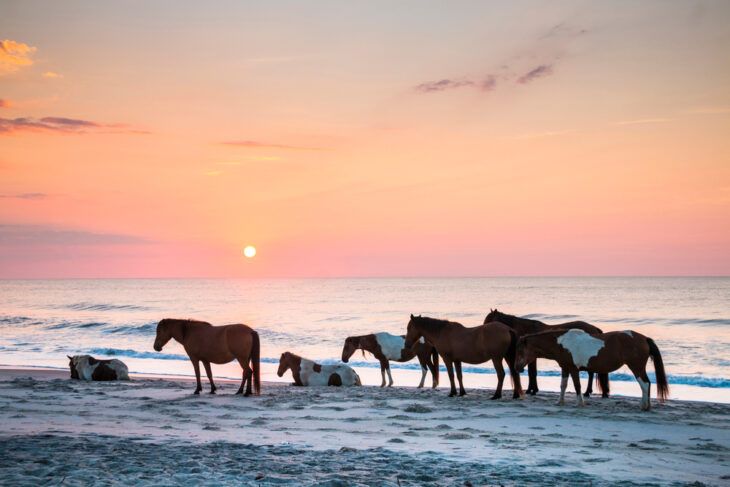 Manassas National Battlefield was the site of two crucial Civil War battles. The first battle took place in July of 1861 when the Confederacy defeated the Union in a slim victory enabled by a round of fresh troops.

The second battle took place in August of 1862 and the Confederacy beat the Union, though by a much wider margin. However, the most important part of this battlefield was the recent archeological discovery of a surgeon’s burial pit. This discovery has taught scientists and historians more about medicine and surgery during the Civil War era. 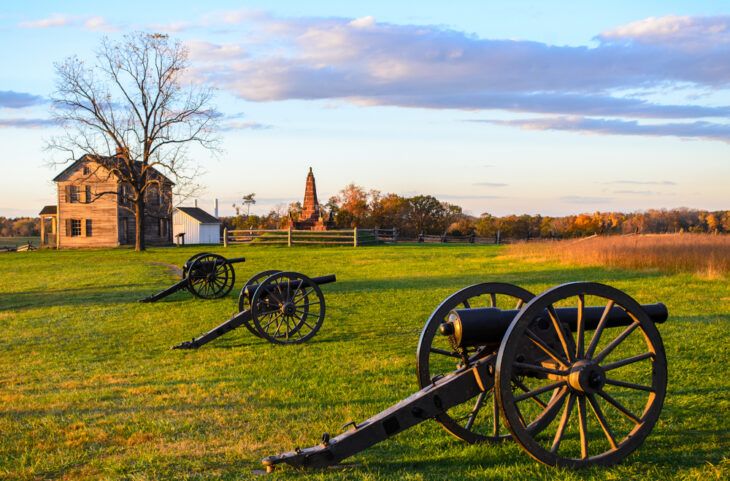 If you’re ready to spend time in nature but want something a little more tame than the great outdoors, Maymont is a must-see. This 100-acre estate was given to the community by James and Sallie Dooley, who called the place home from 1893 until 1925.

The extensive gardens are beautifully done and have a uniquely wild edge. A small waterfall, a picturesque bridge and playful river otters can all be seen here. You can also tour the mansion and see how the other half lived a century ago. 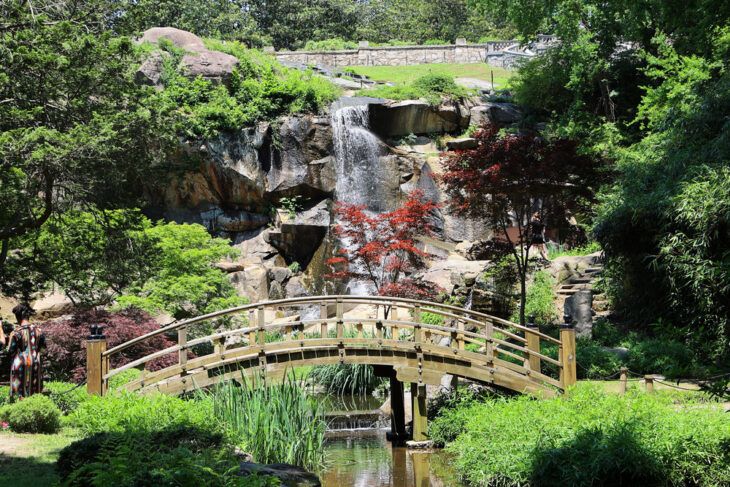 Skyline Drive is a breathtaking scenic route that spans 105 miles through the entirety of Shenandoah National Park. You’ll be met with views of mountains, rivers and gorgeous woodlands. However, it’s not only the gorgeous mountain scenery that draws people to this long, picturesque drive.

There are ample opportunities to view animals in their natural habitat, either from your vehicle or at stops along the way. However, remember to keep to the speed limit because plenty of deer makes their home along Skyline Drive. 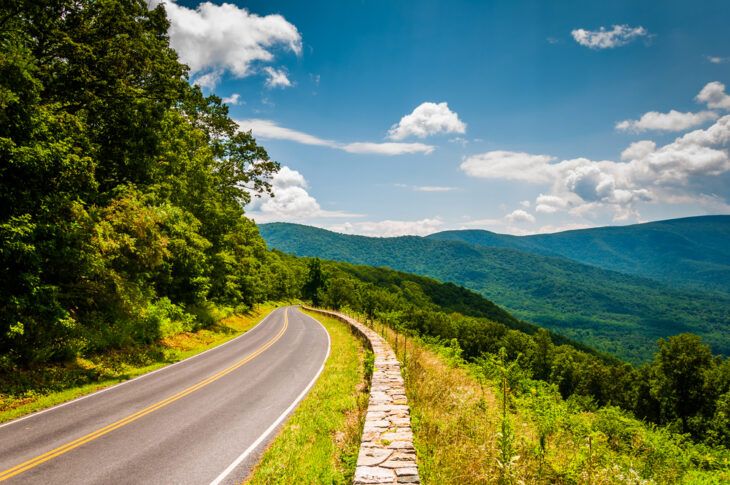 Chelsea Hammond is a content creator and marketer with over a decade of experience. She studied towards a bachelor's in English with a minor in media analysis at Arizona State University and received multiple marketing certifications from HubSpot Academy.