12 Things To See and Do in Lisbon 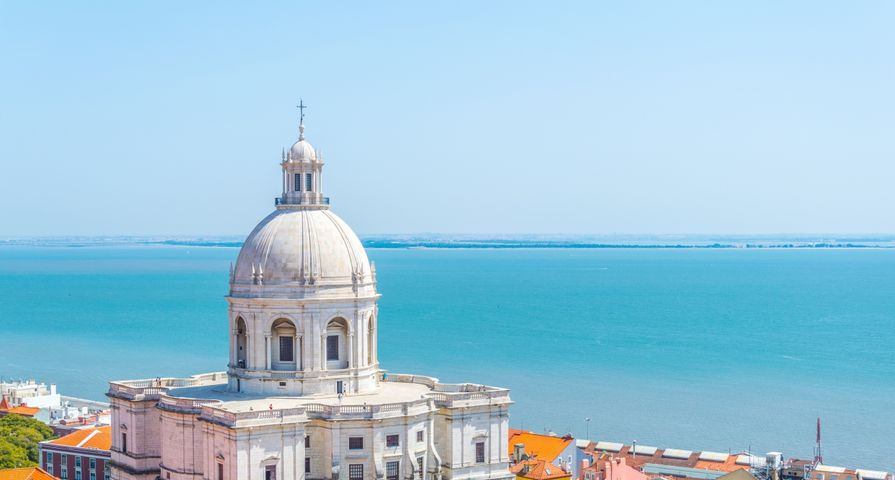 Lisbon is Portugal’s capital city and boasts a plethora of interesting historical sites, winding side streets and sites of cultural significance. Travelers can enjoy a wide range of attractions, including fairy tale castles and wonderfully ornate Manueline buildings. Below, you can find 12 exciting things to see and do in Lisbon, including the best ways to tour the city in style.

One of the most exciting ways to start a Lisbon vacation is with a ride on the Santa Justa Elevator, also known as the Elevator of Carmo. This fascinating and iconic structure was built by Raoul de Mesnier du Ponsard, a protege of Gustav Eiffel, and it bears a striking resemblance to the Eiffel Tower.

The 147-foot iron tower links the Baixa area to the Bairro Alto district via a walkway. Ascending the elevator to the top of the building offers impressive panoramic views of the Tagus river and Baixa. Interestingly, the elevator can accommodate up to 20 passengers on the way up, but only 15 on the way down. 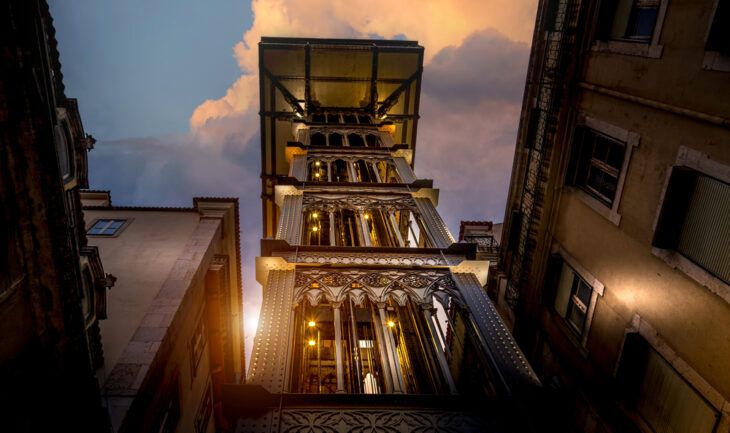 One of Lisbon’s most distinctive architectural characteristics is its highly ornate painted tiles. A visit to the National Tile Museum is the ideal way to learn more about the art form’s development from the 15th century to the present day and see some of the most impressive examples of traditional Portuguese Azulejo tile work.

The museum boasts a picturesque setting within the Madres de Deus convent building. It’s also well worth wandering into the convent’s church for the spectacle of a gilded baroque interior and stunning Azulejo tile panels. 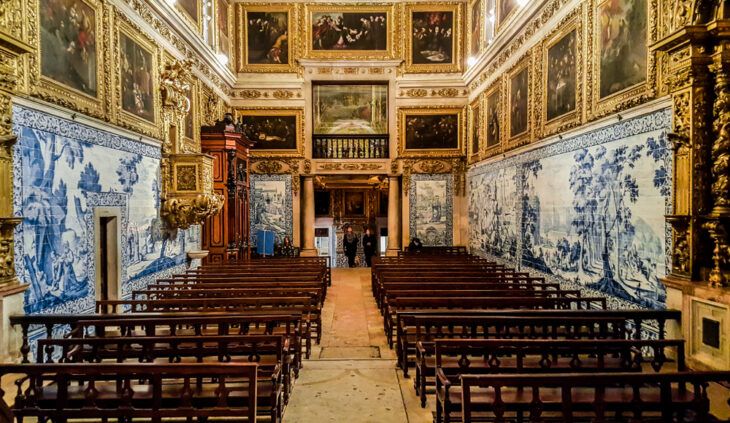 The Castelo de São Jorge, or St. George’s Castle, is a fifth-century fortress built on a hilltop in the historic Alfama area. It offers visitors a thrilling glimpse into the region’s rich history, from its origins as a Roman fortification to its eventual use as a royal stronghold following its capture by King Afonso Henriques in 1147.

There’s not much left of the royal palace, but there’s plenty to discover inside the fairy tale medieval castle. Visitors can enjoy a unique 360-degree view of the city from the camera obscura in the Tower of Ulysses, explore underground chambers and observe native Portuguese plant species in gardens. There’s also an on-site museum where you can learn more about the site’s heritage. 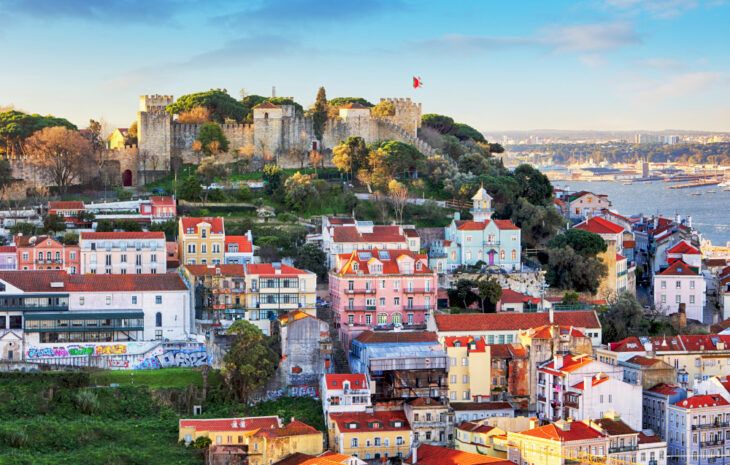 4. Climb the Winding Stairs of the Torre de Belém

The Torre de Belém, or the Belém Tower, is one of the most renowned and well-loved landmarks in Lisbon. This charming fortress was constructed in the 16th century and sits at the mouth of the Tagus river. It was named a Cultural Heritage of Humanity by UNESCO in 1938 and boasts the oldest carved stone rhinoceros in Europe.

Visitors can explore the tower’s five floors via a series of spiral staircases, including the pits and dungeons where unfortunate prisoners were held. The final staircase leads to a roof terrace that provides a beautiful view of the river. 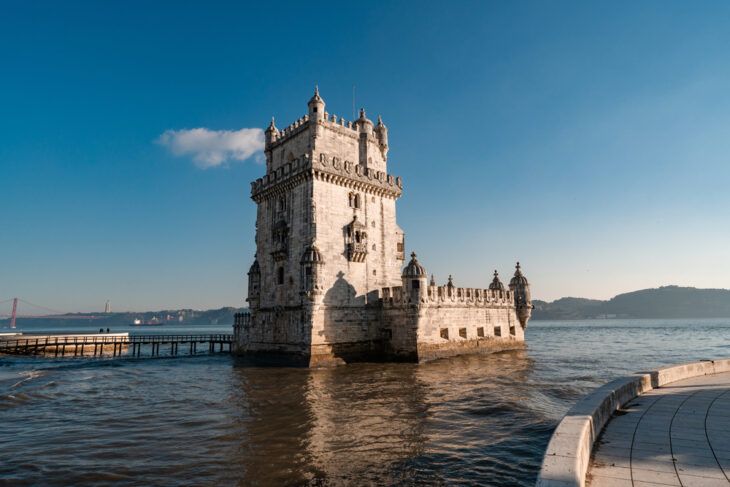 Riding Tram 28 offers visitors a comprehensive tour of the most beautiful and historic parts of Lisbon without tackling the hills on foot. The brakes can be harsh, so it’s a good idea to hold on tight. Alternatively, you may prefer to ride a Remodelado tram along route 12, which tends to be quieter and departs from Martim Moniz. 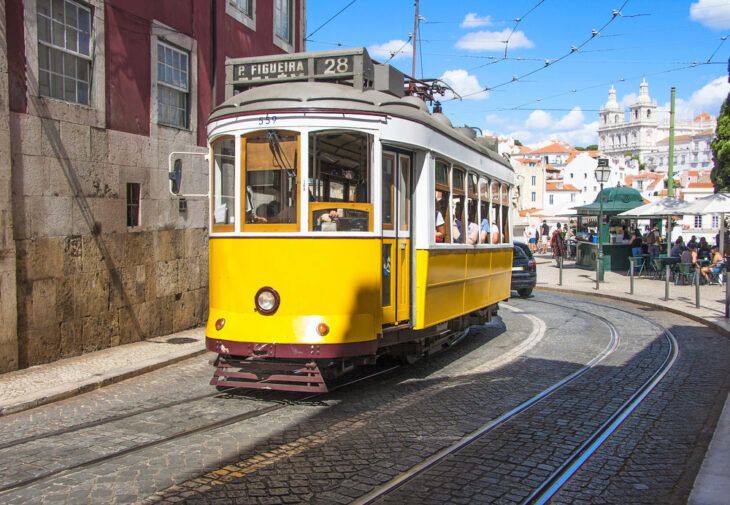 Alfama is a richly historic district and the oldest part of Lisbon. It’s home to the Lisbon Cathedral and affords the ideal opportunity to see traditional Portuguese Azulejo tiles. You can also look at sections of the original city walls and enjoy views of the river from the Miradouro da Graça terrace.

It’s worth setting aside several hours to explore the warren of winding cobbled streets and alleys that give Alfama its whimsical character. There are plenty of charming shops and eateries to discover, including restaurants hosting traditional Fado music ensembles in the evening. 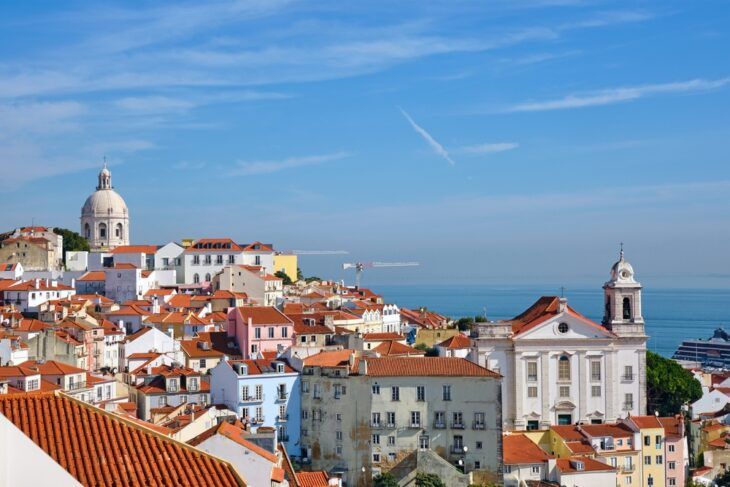 7. Make a Splash at the Lisbon Oceanarium

The futuristic Lisbon Oceanarium is a far cry from the city’s trademark Manueline architecture, but it’s the ideal place for an educational day trip to escape the heat. The building holds an impressive 5 million liters of seawater and is home to countless tropical and cold-water fish. 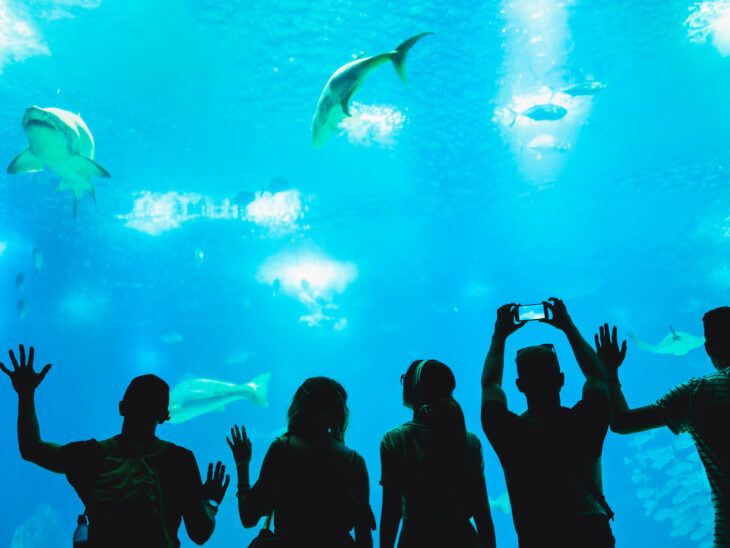 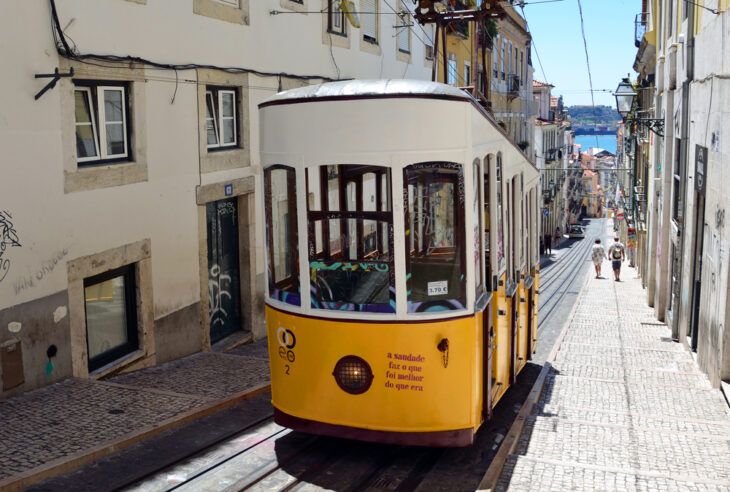 9. Take a Break at the Rossio Square

The lively Rossio Square showcases a magnificent 27-meter-high monument to Dom Pedro IV and two baroque fountains. It’s just a short walk from the Santa Justa Elevator and is the ideal spot to enjoy a refreshing drink on a cafe terrace and watch the world go by. The 19th-century pavement features a distinctive Portuguese wave pattern.

The Rossio Square is also home to the Dona Maria II National Theater, a beautiful neoclassical building with a distinctive column-flanked entrance. It stands on the spot where the Estuas Palace sat before it succumbed to a fire in 1836. 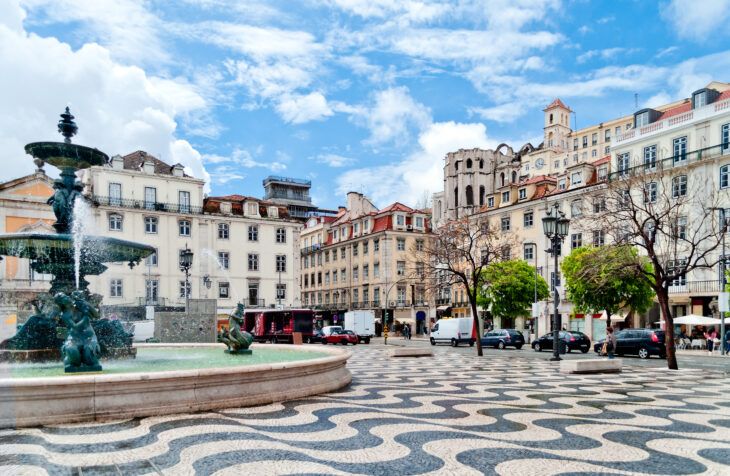 10. Marvel at the Mosteiro dos Jerónimos

The Mosteiro dos Jerónimos, also called the Hieronymite convent, is a UNESCO World Heritage Site and one of the most imposing edifices in Lisbon. It sits near the shores of the Tagus river in Belém and was built in 1501. It showcases some of the most spectacular examples of the Manueline architectural style and took an entire century to build.

The former monastery is home to numerous treasures, including the breathtaking Church of Santa Maria with its famous gabled entrances and exquisitely carved figures. Visitors can also take a stroll along the ornately arched cloisters and enjoy the spectacle of the landscaped gardens, including topiary hedges in the shape of Portuguese coats of arms. 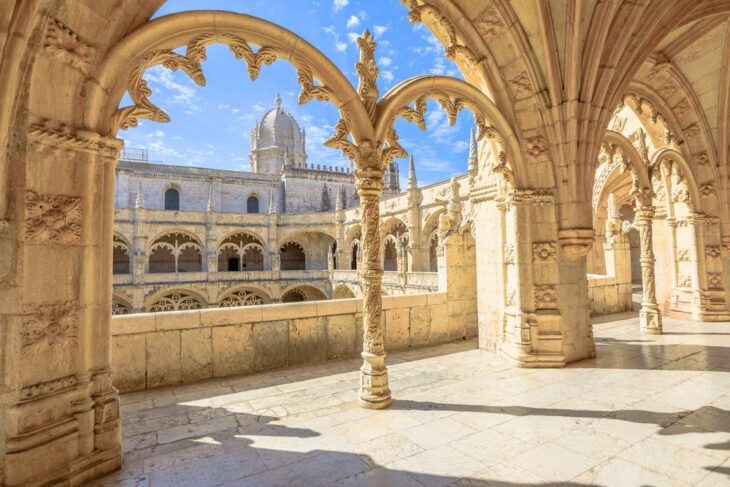 11. Take in the Masterpieces at the Museu Nacional de Arte Antiga

The Museu Nacional de Arte Antiga, or the National Museum of Ancient Art, sits on the site of the Saint Albert Carmelite monastery. Although most of the monastery was lost in an earthquake in 1755, the chapel survived and forms part of the museum. The museum boasts one of the finest collections of Portuguese 15th and 16th-century artwork in the world and is also home to masterpieces by Hans Holbein and Albrecht Dürer.

Another standout feature of the Museu Nacional de Arte Antiga is its picturesque garden and terrace. It’s the perfect spot to stop for refreshment and take in views of the river. 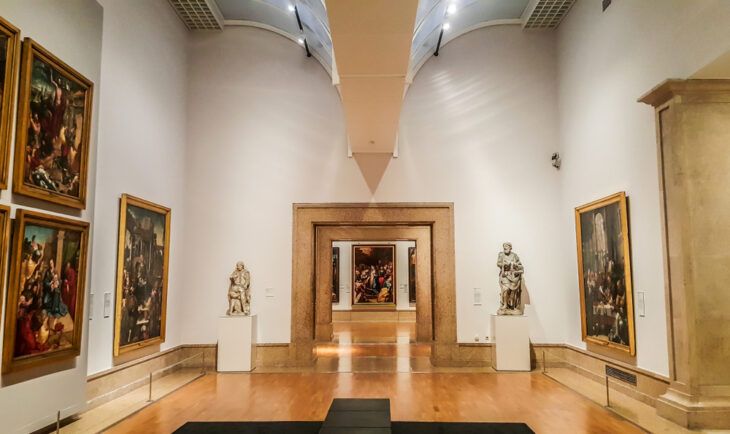 12. Enjoy the View at the Miradouro da Senhora do Monte

The Miradouro da Senhora do Monte is a stunning hilltop landmark in the Graca neighborhood. It’s a little off the beaten track for tourists, making it one of the quieter places to look out over the Lisbon cityscape. Pine trees flank the viewpoint to create a sense of seclusion, and it affords 250-degree views of the old town, Tagus river and St. George’s Castle.

Visitors can also see a beautiful statue of the Virgin Mary in a glass case and a small chapel dedicated to St. Gens. The chapel is rarely open, and it houses a chair that, according to legend, can reduce birthing pains for anyone who sits in it. Therefore, the chapel is a popular pilgrimage destination during pregnancy. 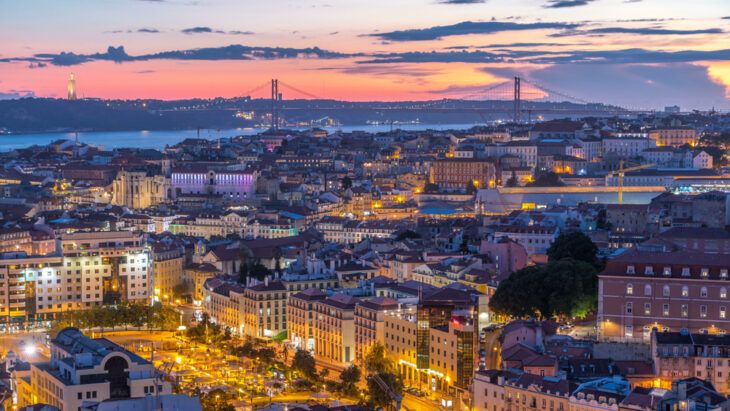 Hannah Stephens lives in Kent in the United Kingdom with her husband and young son. She is a qualified elementary teacher and has been working as a commercial writer for over four years. When she's not busy creating content, Hannah enjoys cooking, learning new languages, and walking in the beautiful countryside near her home.