12 Things to See and Do in Chicago 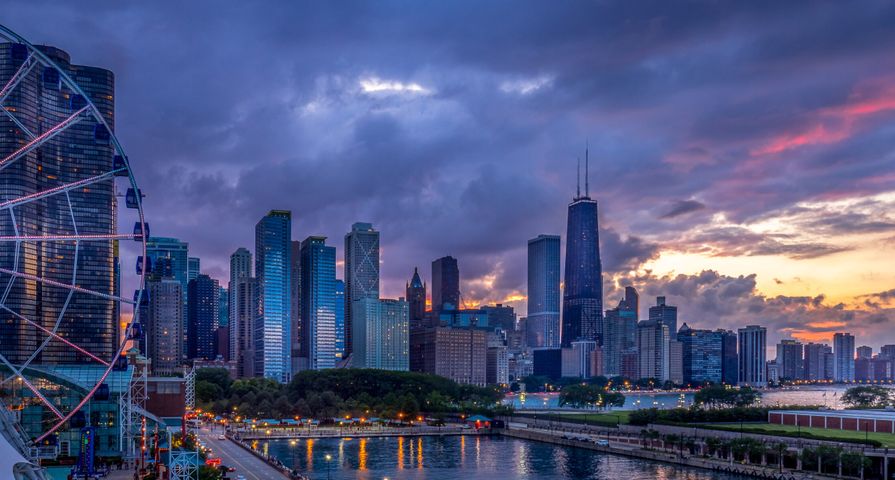 After New York and L.A, the city of Chicago is the third-largest metropolis in the United States. With close to three million residents, it’s filled with interesting and fun things to keep you busy. There’s a rich culture of art, science, architecture, and sports history to soak in. In short, there’s definitely something to appease every interest. Whether you’re into relaxing in the sun, checking out a ballgame, or shopping for designer fashion, Chicago has you covered. Here are 12 of the coolest things you should make time for when you visit the Windy City.

The Navy Pier is one of Chicago’s most recognizable landmarks. Extending out into Lake Michigan, the Pier offers a ton of family friendly attractions. There is, of course, the 200-foot tall Ferris wheel. Closer to the ground, you’ll find shopping, restaurants, a carousel, and even a mini-golf course. There’s also the Chicago’s Children Museum, filled with interactive displays.

Navy Pier is also a great place to visit without the kids. There’s plenty of pubs and places to grab a drink. There is a regular schedule of small concerts or you could catch a performance at the Chicago Shakespeare Theater. In the summer months (and on New Year’s Eve), the Pier is a great place to watch special fireworks shows. 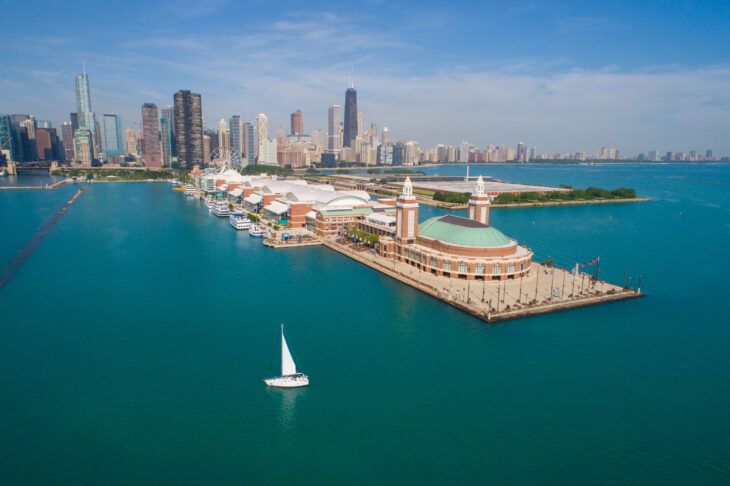 Chicago has an incredibly rich and interesting history. One of the best ways to get a crash course on that history is through one of the Chicago Architecture River Cruises. There are multiple companies that offer this attraction, so you can shop around for the experience that best suits you. No matter which one you pick, cruising the rivers of Chicago on a warm sunny day (with a cold drink in your hand) is an excellent choice.

As you cruise through the city, you’ll learn about famous landmarks like the Wrigley Building and the Fulton House. You’ll learn about important bridges and why certain buildings were designed in specific ways. If you’re looking for excellent photo-ops for the Gram, any river cruise tour will give you plenty of great vantage points. 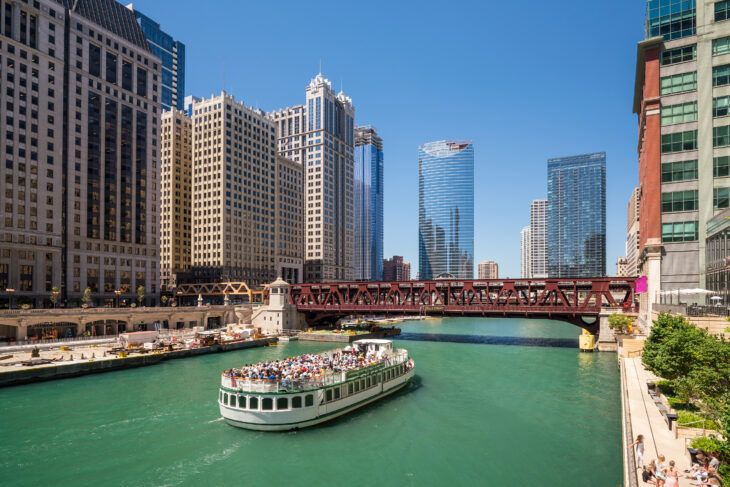 You don’t even really have to like baseball in order to appreciate Wrigley Field. Nestled into a dense suburban area on the North Side of Chicago, the home of MLB’s Chicago Cubs is a true throw-back. It’s one of the oldest ballparks in the Major Leagues and features a bunch of iconic features. There’s the beautiful ivy on the outfield fence, the famous Wrigley Field sign on the front entrance, and of course, the center field bleachers where fans have some… weird traditions.

Scoring tickets to a Cubs game (or using the third-party rooftop seats on surrounding buildings) is well worth it. But if the Cubbies are out of town when you visit Chicago, consider a guided tour of the ballpark anyway. Basic tours start around $30 and last for about 90 minutes. You’ll learn a ton about the history of the stadium and baseball in Chicago. Plus you’ll get to see parts of the stadium that you wouldn’t be able to wander into during a real game. 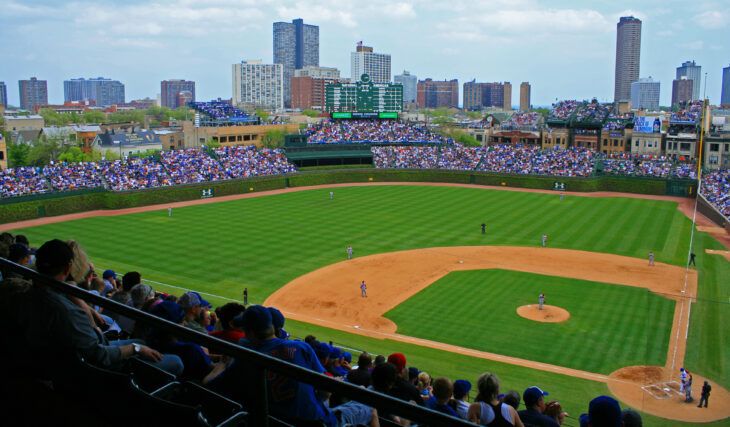 9. The Art Institute of Chicago

If sports really aren’t your thing, skip Wrigley Field and make an afternoon for the Art Institute of Chicago. It’s one of the largest and most impressive collections of impressionist and post-impressionist art in the entire United States. Of course, there are plenty of other genres to view too. All in all, there are more than 300,000 pieces of amazing art in the Institute’s permanent collection. It also constantly hosts traveling exhibits, meaning you ever know which amazing art might be on display while you’re in Chicago.

You’ll be able to see original pieces by van Gogh, Money, and Renoir (to name a few).  There’s also an entire section devoted to ancient artifacts, like European armor. The Art Institute is located just south of Millennium Park. There’s not much public parking, but taking transit or walking/biking is a great option. General admission is only $25 too. 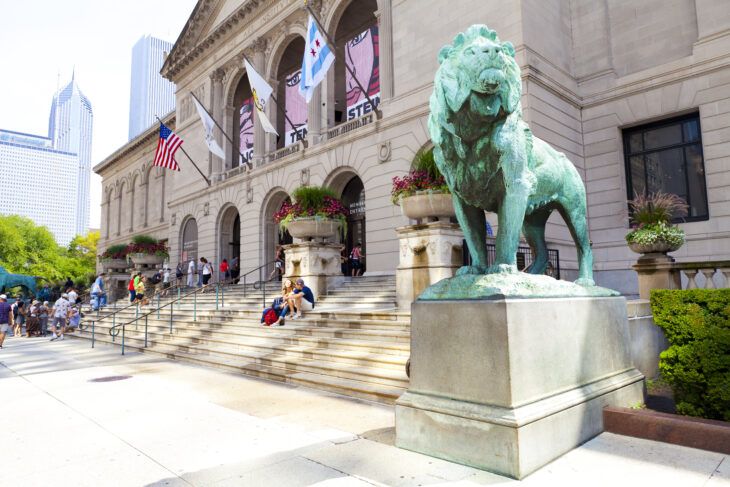 Speaking of Millennium Park, it’s more than worth a visit on its own. Located on the Loop and right beside the Art Institute, the park is a 24.5-acre green space with a bunch of cool things to see. There’s amazing artwork, beautiful landscaping, and of course, The Bean. The iconic stainless steel sculpture is actually called Cloud Gate, and no trip to Chicago is complete without checking it out.

Millennium Park also has the Jay Pritzker Pavilion, where you may be lucky enough to catch an outdoor music performance. The Crown Fountain is also an amazing mix of technology and art, with its dual 50-foot LED projections. Millennium Park is the perfect place for a picnic or a casual bike ride (you can rent a bike pretty cheaply). Best of all, its main attractions are all free. 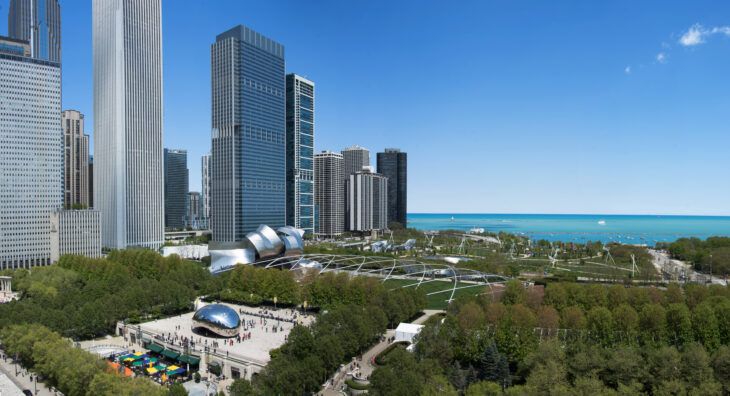 If you’re more of a shopaholic than a picnicker, head on over the Magnificent Mile. It’s a stretch of Michigan Avenue that caters to all your spending needs. You’ll find major department stores and luxury brands like Bloomingdales, Macy’s, and Nordstrom. There’s also plenty of high-quality restaurants in the area, and some of the best luxury hotels in the city.

On top of the shopping experience, there’s also plenty of cool things to simply see on the Mile. The Chicago Water Tower — which famously survived the Great Fire of 1871 — is the longest standing structure on the street. You can also check out the Wrigley Building and the Tribune Tower. 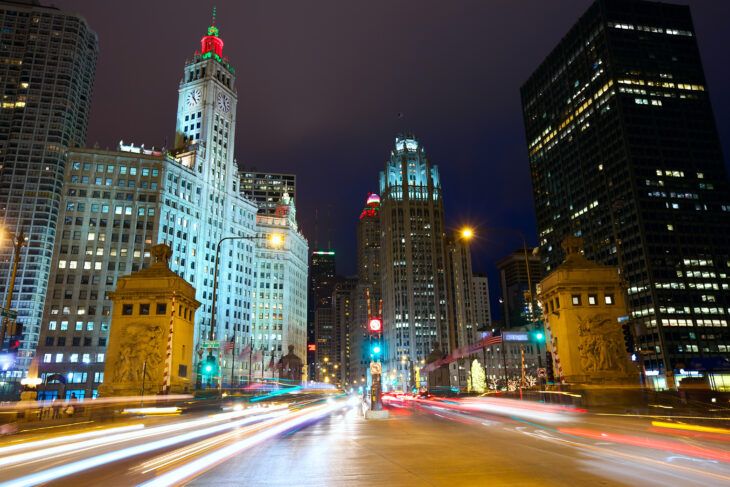 The Lincoln Park Zoo is a great place to bring the kids — or just to check out by yourself. It’s located a couple miles off the Loop on the North Side of the city, just above the Gold Coast. You’ll find over 200 species on display, including zebras, hippos, and sloths. There’s a nice mix of both furry and scaly animals to see and learn about. The harbor seals are always a fan favorite.

One of the best things about the Lincoln Park Zoo is that there is no admission fee. However, there are still plenty of places to spend your money, including food and drink stands, rides, souvenirs, and parking. In fact, parking can cost up to $40 for the day, so our advice is don’t drive there unless you absolutely have it. 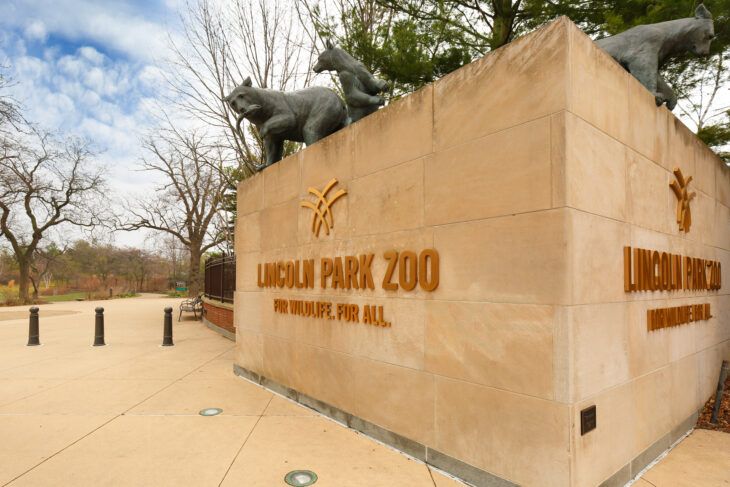 If you didn’t know better, you might think that Grant Park is just an extension of Millennium Park (or vice-versa). Indeed, these beautiful outdoor spaces are basically right next to each other. Technically, though, Grant Park is a separate attraction. It’s also much bigger, spanning 313-acres in total. The park is filled with flower gardens, sandlot baseball diamonds, and walking/biking paths.

The crown jewel of Grant Park is Buckingham Fountain. It’s one of the largest fountains in the world and shoots water up to 150-feet in the air during its 20 minute choreographed shows. The fountain is especially gorgeous at night, when it’s lit up by LED lights. And yes, if you’re old enough, you will recognize the fountain from the opening credits of the old Fox sitcom Married… With Children.

Occasionally, Grant Park will host huge events. The Lollapalooza music festival has been held there. So has Pokemon GoFest. Former President Barack Obama, a proud former Chicago resident, has also used the park for major political rallies and speeches. 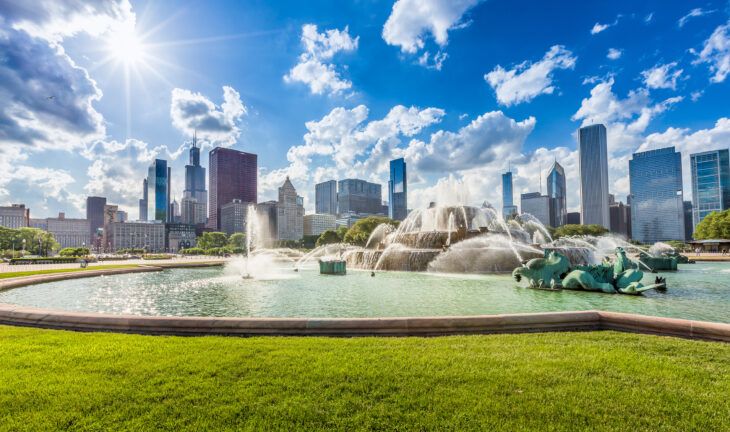 4. Museum of Science and Industry

Chicago has a long history of innovation. You can find out more about these innovations in the Museum of Science and Technology. Located roughly nine miles south of downtown, getting to the Museum takes a bit of effort. However, visitors will insist its worth the trip. In fact, it’s located on the same land that hosted the famous World’s Columbian Exposition in 1893 — when Thomas Edison and Nikola Tesla were advocating for which type of electricity was more efficient.

The museum has over 35,000 artifacts and a bunch of hands-on exhibits that are sure to please children (and curious adults). There’s a tour of a U-505 German submarine that was captured during World War II. There’s a space exhibit in the Henry Crown Space Center. You’ll also find an Omnimax Theater that shows a rotating series of fun, short educational films. We advise that you buy tickets ahead of time ($21.95 for adults and $12.95 for kids aged 3-11). 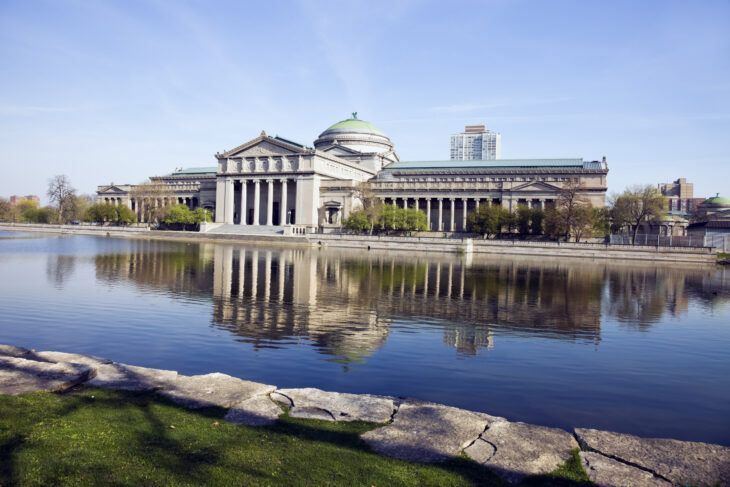 Chicago may have some brutal winters, but it’s still a great place to enjoy sunshine in the summer months. The North Avenue beach is the perfect spot to catch some rays or cool off in Lake Michigan. The 22,000-square-foot beach has plenty of room for beach volleyball, sand soccer, or building sandcastles. It also offers an amazing view of the city skyline.

The beach also features plenty of paths for a lakeside bike ride, walk, or run. Naturally, there are plenty of food and drink vendors to grab a snack at. Admission to the beach itself is free, of course. The beach is accessible via numerous public transit options — which we recommend, since parking is limited (and expensive). Be warned, though: the beach fills up quickly on hot days, so arrive early. 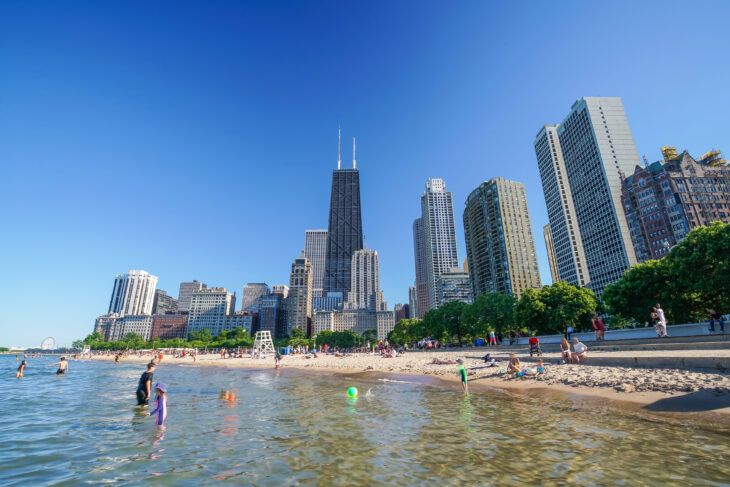 Located on the waterfront south of Navy Pier (just underneath Grant Park, really), you’ll find the Shedd Aquarium. It’s one of the largest indoor aquariums in the world, home to more than 32,000 underwater life forms. There’s sea lions and turtles and you can even pet a stingray. Oh, and you’ll definitely spot a shark or two.

The aquarium occasionally has special exhibits or interactive shows, like animal feedings. These are also worth checking out, if your timing lines up. However, you should probably buy tickets ahead of time, as the aquarium can reach capacity quickly. General admission tickets are $40 for adults and $30 for children (although they are cheaper if you actually live in Chicago). 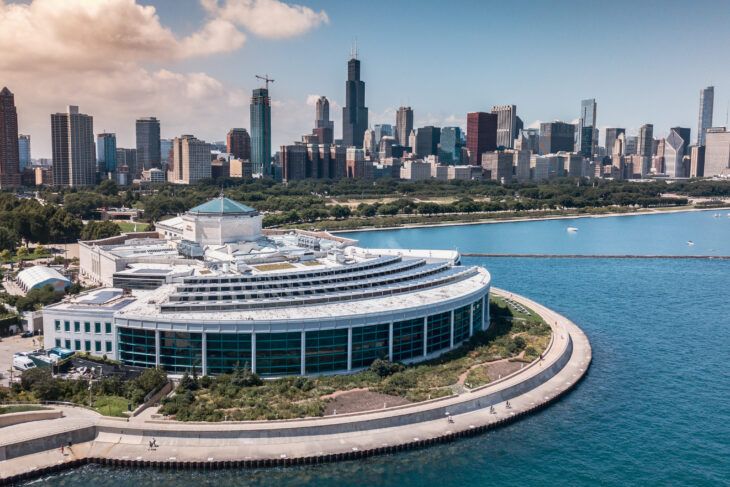 For those without a fear of heights, climb your way up to the 360 Chicago Observation Deck. It’s located on the 94th floor of the John Hancock Center and soars more than 1,000 feet over the city streets. It features floor-to-ceiling windows and expansive views of the city in all directions. There’s also a 360 Chicago TILT option. It features a mechanical room that tilts outwards while you hold on to handlebars. It’s a neat experience, but your heart may skip a beat or two!

A competing attractive is the Willis Tower Skydeck Chicago. Truth be told, both experiences are fairly similar. 360 Chicago tickets are a bit more expensive, but the lines are often shorter. Tickets are $30 for adults, $20 for children, and the TILT experience will cost you a bit more too. On the bright side, 360 Chicago is located at the heart of downtown, just north of the Magnificent Mile. 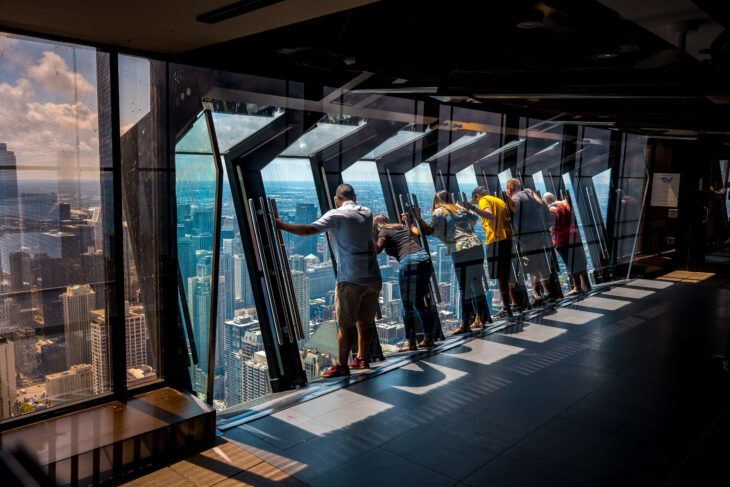 A Chicago-style deep dish pizza is not like any other pizza you’ve ever had. It’s a whole new experience. Enough with that thin-crust garbage! A deep-dish pizza is thick, gooey, cheesy, and will fill up your stomach like no other pizza. It really doesn’t matter where you get one — they are available all over the city. As long as it fits into any dietary restrictions you have, you owe it to yourself to scarf down a deep dish. 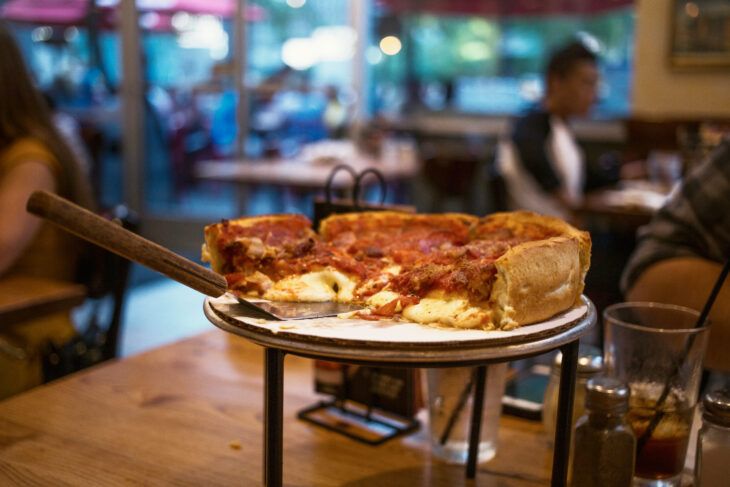 Devon Taylor is an experienced writer and a father of three young children. He's been in online publishing since 2013 and has a degree from the University of Guelph. In his free time, he loves fanatically following the Blue Jays and Toronto FC, distance running, camping with his family, and playing video games.