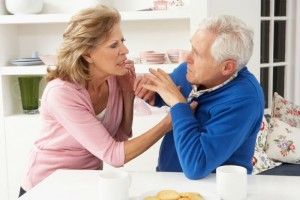 Older people, especially those with Alzheimer’s and Dementia, are prone to fractures and injuries due to falls.

However, researchers at the University Health Network in Toronto, have uncovered a disturbing trend in broken bones and bruises in senior radiology patients that signal elder abuse.

“There’s a typical distribution of [fractures and soft tissue] injuries…around the eyes and to the teeth…seen radiologically in elderly patients who are beaten,” says Dr. Kieran Murphy, a Radiologist at Toronto’s University Health Network.

After reviewing international medical literature and Ontario coroners’ reports from approximately 1,100 abuse cases from patients over age 60, Murphy and his team started to recognize a pattern of fractures and soft-tissue injuries over and over again due to physical shaking, which can lead to bleeding injuries (or subdurals) inside the head, soft-tissue and upper-extremity injuries.

“[Seniors] fall on an outstretched hand and they break their wrist or their hip,” says Murphy, “they don’t usually break their scapula (shoulder blade) or their orbit (bony eye socket).”

Murphy says his team began to recognize what could be signs of elder abuse, especially after findings revealed that the majority of the abuse cases studied were typically in home settings and cared for by a non-professional (i.e., a family member or untrained caregiver) who was financially dependent on the older person and who also was suspected to have an addiction to alcohol or drugs.

Murphy further noted that the majority of abuse cases were debilitated due to serious health conditions—such as dementia or a stroke.

“If you factor in these different issues, you come up with a fairly accurate likelihood that these injuries were not accidental,” says Murphy.

The team hopes that their findings will draw attention to the pattern of injuries associated with elder abuse, a “silent epidemic” due to the fact that it’s rarely reported, and spur health providers to identify the signs of elder abuse quickly and ask patients if they are being abused.

Source: The Globe and Mail