How to Protect Your Pets From Wildfire Smoke 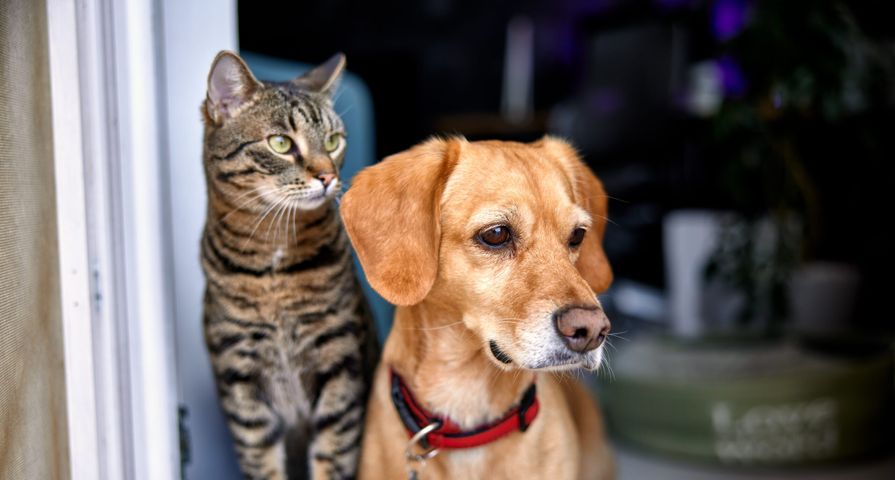 Summer brings lots of enjoyable things like warm weather, longer days, and more time outdoors. However, it also brings some of the hottest and driest days of the year increasing the risk of seasonal wildfires. In many parts of North America, wildfires and wildfire smoke is a real and ongoing threat during the summer months.

The health and safety concerns during wildfire season are just as prominent for pets as they are for humans and wildlife. As a result, all pet owners who live in areas susceptible to wildfires should familiarize themselves with the warning signs of irritation, as well as tips and tricks on how to protect their pets. Let’s take a look…

How Bad is Wildfire Smoke for Pets?

Every wildfire is different due to many factors like temperature of the fire and the materials that are burned (i.e. type of wood, construction material, etc). For the most part, “…smoke is mostly made up of carbon dioxide, carbon monoxide, particulate matter, soot, hydrocarbons, and other organic substances including nitrogen oxides and trace minerals,” writes the Oregon State University.

According to Wag!, 80-percent of wildfire smoke is made up of fine particulate matter. This is what is especially dangerous to humans and animals as this matter can infiltrate the lungs, pass into the bloodstream, and settle into the body. “The effects of particulate matter exposure on humans and animals range from eye and respiratory tract irritation to more serious disorders including reduced lung function, bronchitis, exacerbation of asthma, heart failure and premature death,” writes the Oregon State University. 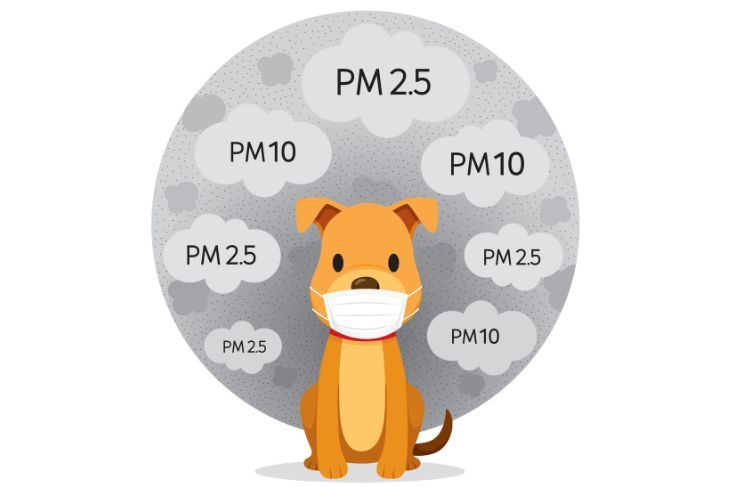 Signs of Smoke or Dust Irritation

The biggest concern during wildfire season is that fine particles from smoke can get into their lungs and cause a variety of health issues. It’s important for all pet owners to know and be able to recognize the signs of smoke or dust irritation. If an animal is showing any of these signs, call a veterinarian right away. 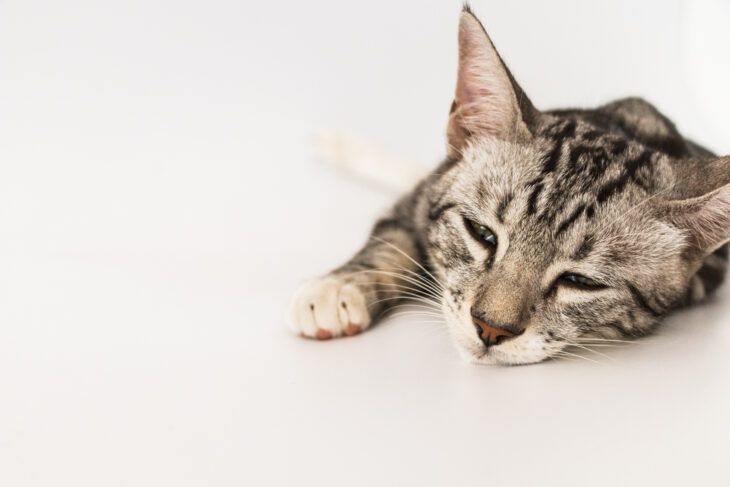 Pets That are Especially Vulnerable

Smoke is especially harmful to birds due to their unique breathing system. “It is characterized by unidirectional airflow and cross-current gas exchange, which makes them more susceptible to exposure to wildfire smoke,” writes Oregon State University. When possible, more birds indoors to a room with good ventilation or to a new location entirely that has better air quality. This will help reduce any complications from wildfire smoke exposure. 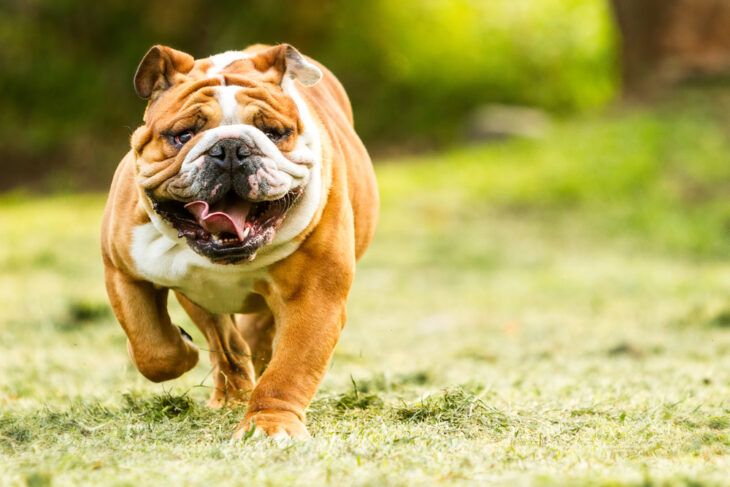 The best form of protection against wildfire smoke is to keep pets indoors. Of course this isn’t feasible all the time as some pets require exercise or need to go outside to relieve themselves. Air Now’s advice is to limit their time outdoors as much as possible. Do not exercise outdoors with them or go on long walks. Only do what’s necessary. A brief bathroom break is all they should get if air quality alerts are in effect.

Keep windows and doors closed and bring outdoor pets into a room with good ventilation such as a utility room, garage, or bathroom. The source also suggests moving any potentially dangerous products from these areas so pets can’t get into them while they are in these areas.

Cat owners should keep in mind that their cat can exposure themselves to smoke through grooming because smoke can stick to their hair. Keep cats inside as much as possible during times of poor air quality, says Speaking For Animals (SPCA). 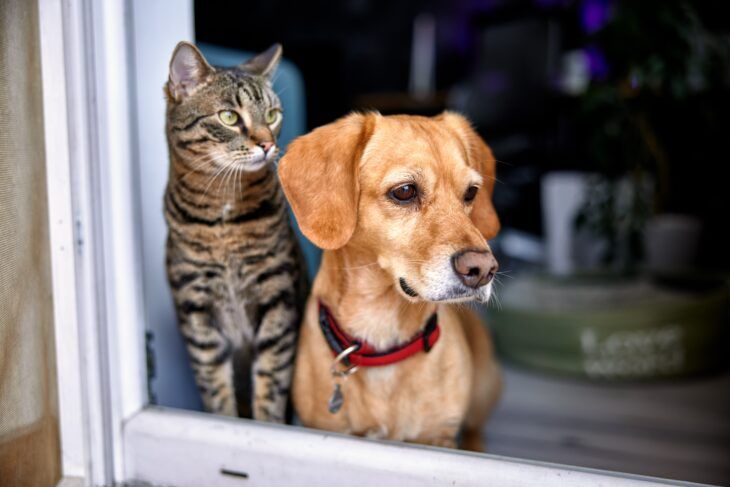 Most pets need some kind of stimulation or regular exercise, dogs especially. This can be hard to do during times when you’re stuck indoors due to poor air quality outside. In order to keep pets happy and healthy while staying indoors, make sure to keep them busy with some indoor activities.

Rover.com provides some great examples of indoor exercise for pets: hide and seek, puzzle toys, fetch and tug, teaching tricks, nose work, or brush up on basic training. For those who have the space and equipment, you could also create an indoor ability course or walk them on the treadmill (this requires some help from a dog trainer). 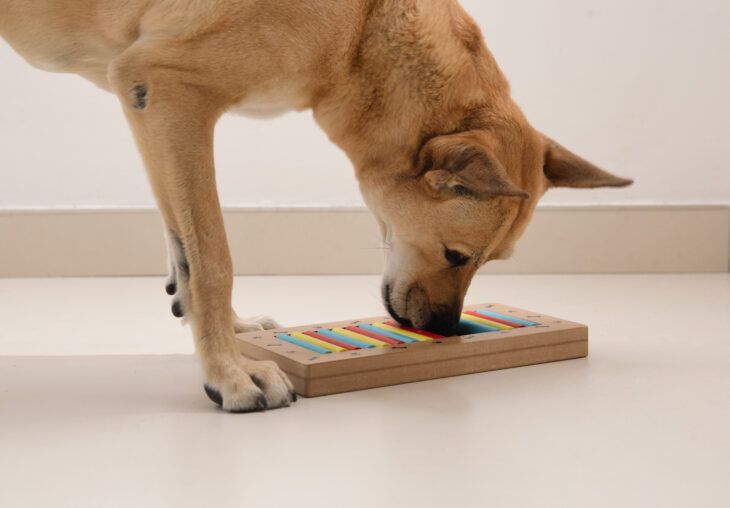 People who live in areas where wildfires are more likely to occur should invest in good central air conditioning. This provides access to cool air in case there are active fires in the area and you can’t open your windows. On top of that, Air Now recommends buying high efficiency filters. These will help capture fine particles from the smoke.

If there are pets living in the house, it also protects them. Consider creating one room in the house that is a designated “clean room.” The same source advises putting a portable air cleaner in here. This can act as a safe place for pets to hang out in the home when the air quality is low. 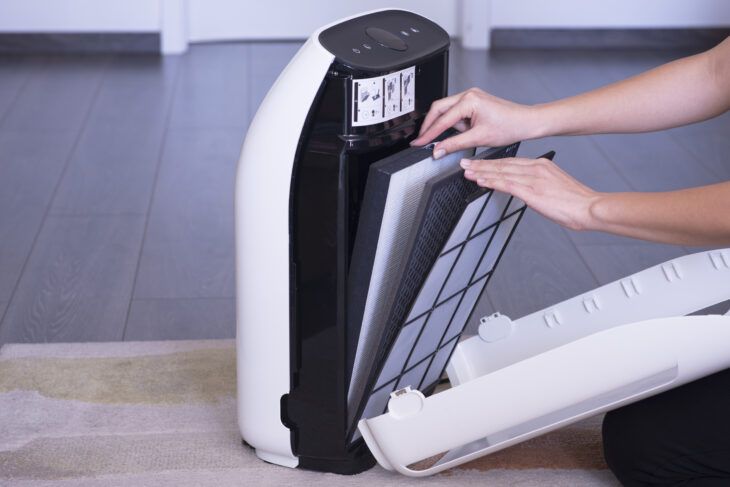 In addition to using central air conditioning and portable air cleaners, avoid tainting the air quality inside the house. If you’re unable to open windows or doors due to smoke, you’ll want to try to maintain the air quality indoors as much as possible. At least until it’s safe to open up to the outdoors again.

Air Now suggests people avoid frying or boiling foods, vacuuming, burning candles, using a fireplace or wood stove, and smoking tobacco products. All of these activities introduce or add particles into the air space of the home. 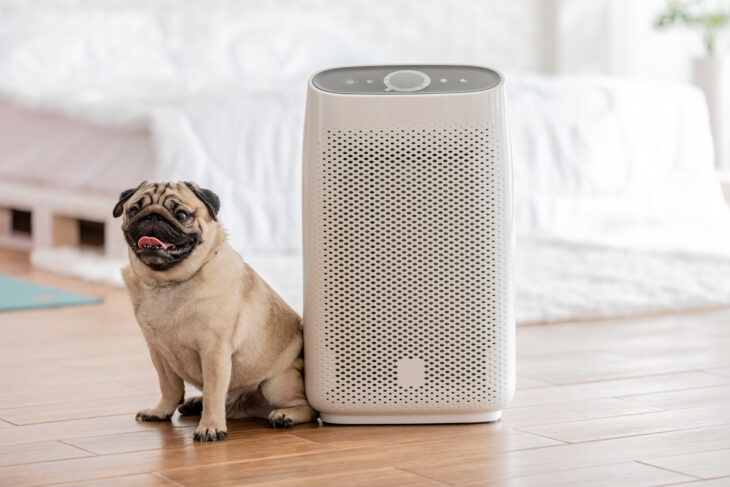 Be Ready to Evacuate

People who live in areas susceptible to wildfires live with the notion that they could be evacuated at any time. You should have an evacuation plan ready at all times, and people who are pet owners need to include their pets in this plan. Each pet needs to be identifiable with tags or through a microchip. You should get informed on where they are allowed to go during an evacuation. For example, not all shelters accept pets.

Be aware of any areas on the property where pets might hide. Air Now explains that pets who experience stress will hide. Obviously in the case of an emergency, there isn’t time to be searching around aimlessly. Learn where these target areas are ahead of time. Get them used to their carriers and make sure all family members practice what to do in order to evacuate any pets. If you own a particularly nervous pet, it might be a good idea to cover their carrier during transport.

Always have an evacuation kit ready in the case of emergency. This avoids wasting time in the literal heat of the moment. You can just grab it and go. Make sure there is food, water, and enough medicine for 7 to 10 days. Air Now also suggests including sanitation and first aid supplies, any important documents (i.e. proof of ownership, vaccination records, medical records, and medication instructions, emergency contacts), travel supplies (i.e. crate, extra collar and leash, ID tags, batteries, flashlight), and comfort items like their favorite toys and treats. 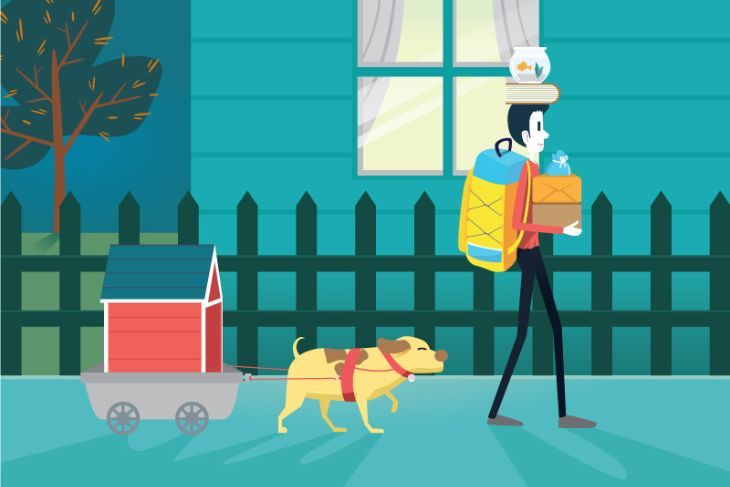 Obviously all animals need access to clean water in order to survive. This is especially important during times when there is potential wildfire smoke exposure or if they spend a great deal of time outdoors. This pertains largely to people who own livestock as they can’t bring their animals indoors, aside from an outdoor shelter or barn.

Make sure all animals have access to fresh, portable water and plenty of shade during times of extreme heat. If you’re under evacuation, don’t forget to bring portable water along with you for yourself and your pets. 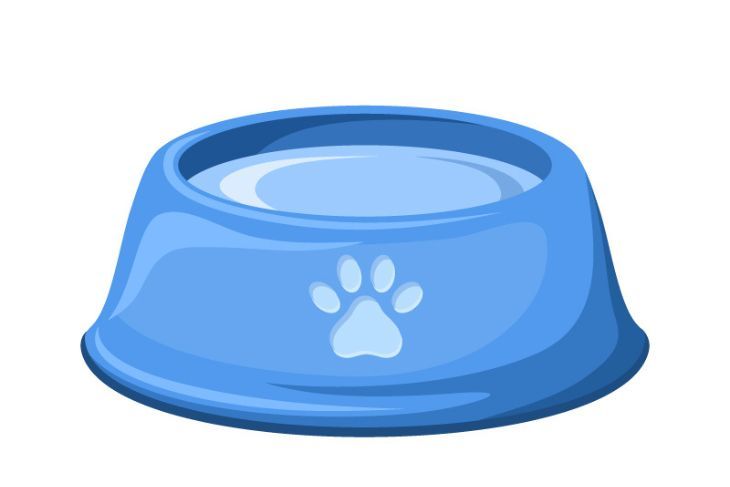 People who live in high risk areas with frequent wildfires should check the air quality index of their area regularly. This will help inform pet owners if and when it’s safe to go outdoors. You can download the National Weather Service app to receive alerts on wildfires in the area. Residents should also receive a Wireless Emergency Alert (WEA) message on their phone if required to evacuate, notes Wag! 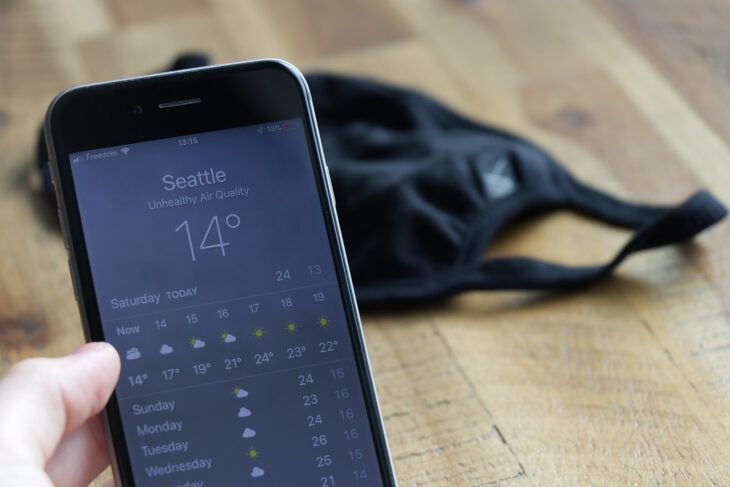 Do Masks on Dogs Work?

People in China and California have put masks on their dogs to prevent smoke inhalation when outdoors. Rover.com calls these masks “pollution marks” and notes they are routinely used in China due to heavy smog. However, finding a mask that fits properly can be tricky. Not only that, but one that they will actually keep on.

How effective these masks are depends on how well they fit. We do not recommend using masks on pets as a fool-proof way to protect them against wildfire smoke or smog. You can certainly try, but should only be used in addition to more effective measures (i.e. staying indoors and maintaining good air quality inside the home). 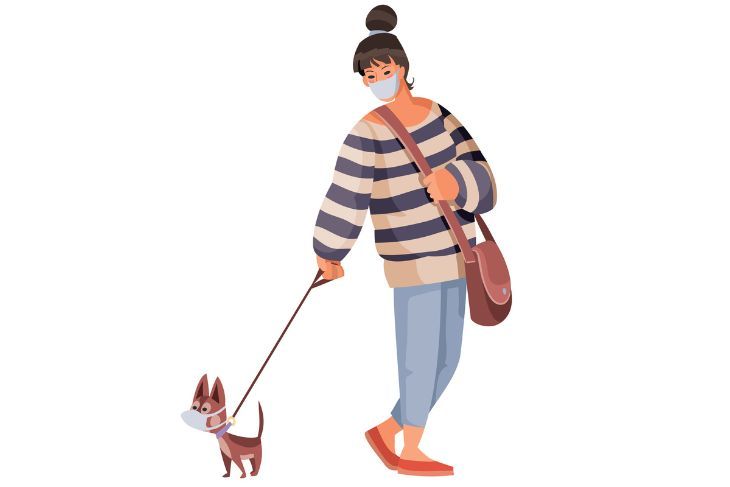 Similar to pets, people who own livestock should be informed on how to protect their animals during wildfire season. If smoke is visible, limit their exercise. The American Veterinary Medical Association (AVMA) recommends suspending any performance activities that increase airflow in and out of their lungs. Provide them with plenty of fresh water near feeding areas and limit dust exposure by feeding dust-free or low-dust feeds. You should also sprinkle or mist the livestock holding area.

Allow 4 to 6-weeks for livestock to recuperate once air quality returns to normal, says AVMA. Avoid moving, handling, or transporting livestock prior to this as it could hinder any healing they need to do or compromise their performance. The source also suggests having an evacuation plan ready with enough trailers to quickly transport any and all animals. Keep up good bar and field maintenance to reduce any fire danger for horses and other livestock. “Make sure barns and other structures are stable, promptly remove dead trees, clear away brush, and maintain a defensible space around structures,” writes AVMA. 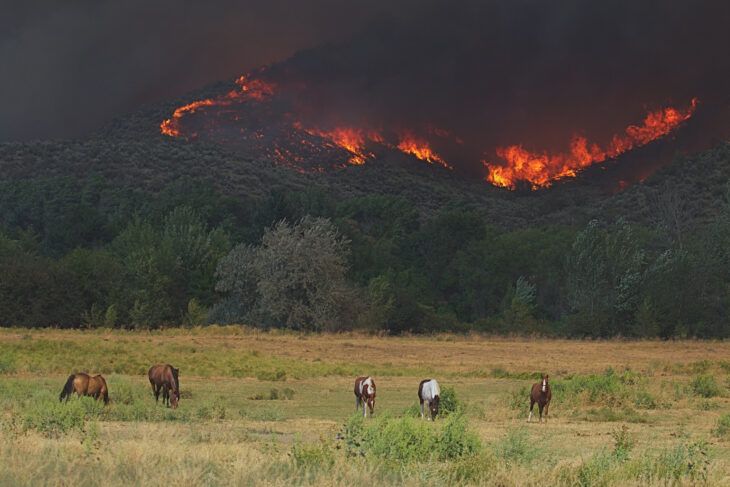