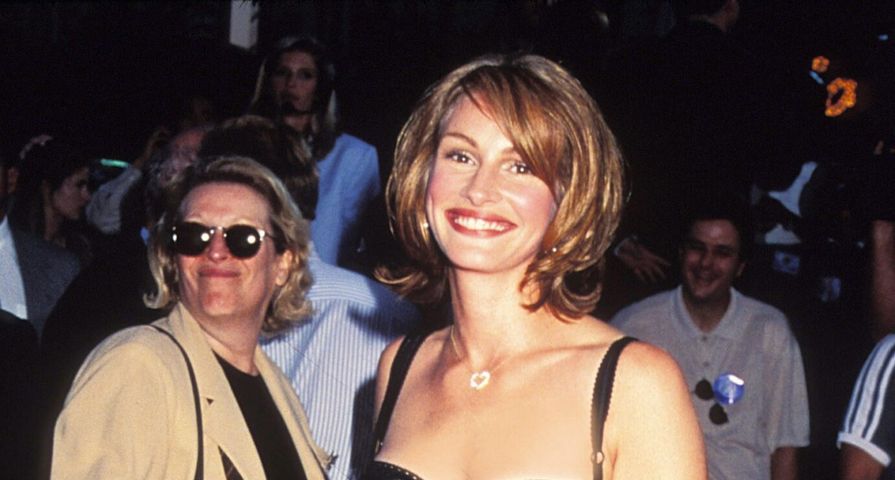 Red carpet fashion has changed significantly over the years, but the ’90s were definitely a noteworthy era when it came to Hollywood style. From Jennifer Aniston to the Olsen twins, follow along as we reminisce on rare red carpet outfits from the ’90s era of elite Hollywood glamour.

Winona Ryder stepped out at the 68th annual Academy Awards looking young and bright-eyed back in 1996. The star stepped out in a slinky blush dress which featured a glittering texture and held a shawl over her shoulder. She accessorized with a coordinating pink bucket bag and styled her hair in old Hollywood-inspired finger waves. 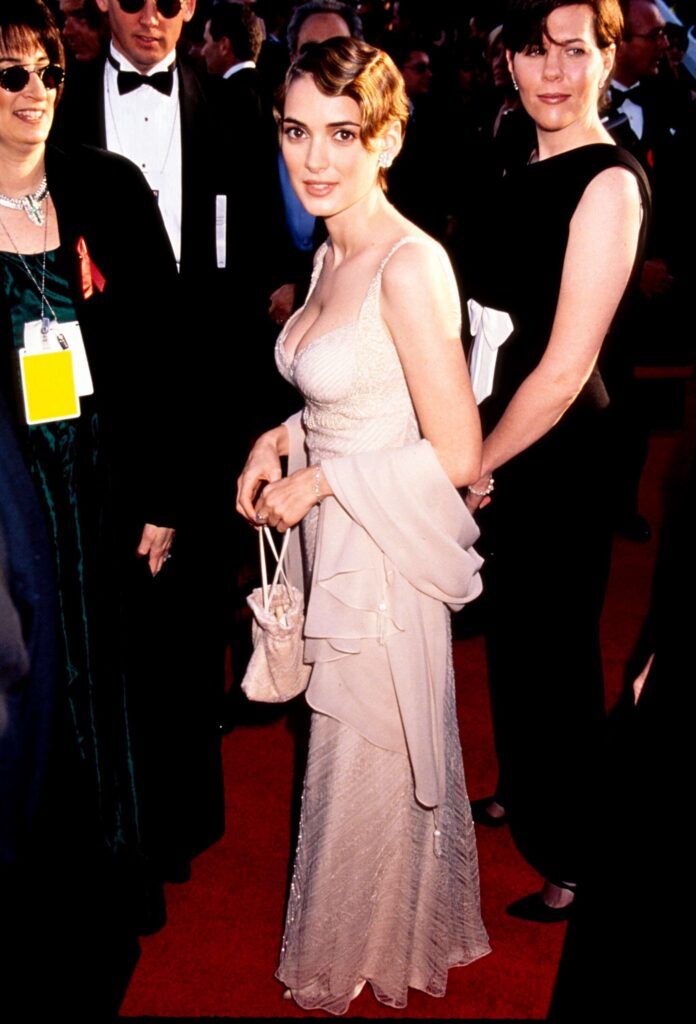 Angelina Jolie has been a Hollywood icon since the ’90s and has never failed to let us down with her sultry red carpet looks. Back in 1998, she stepped out at the 55th annual Golden Globes awards wearing a midi-length silver slip dress. Her hair was short and cropped and she rocked a navy blue smokey eye, which is a true signature look from the ’90s beauty era. 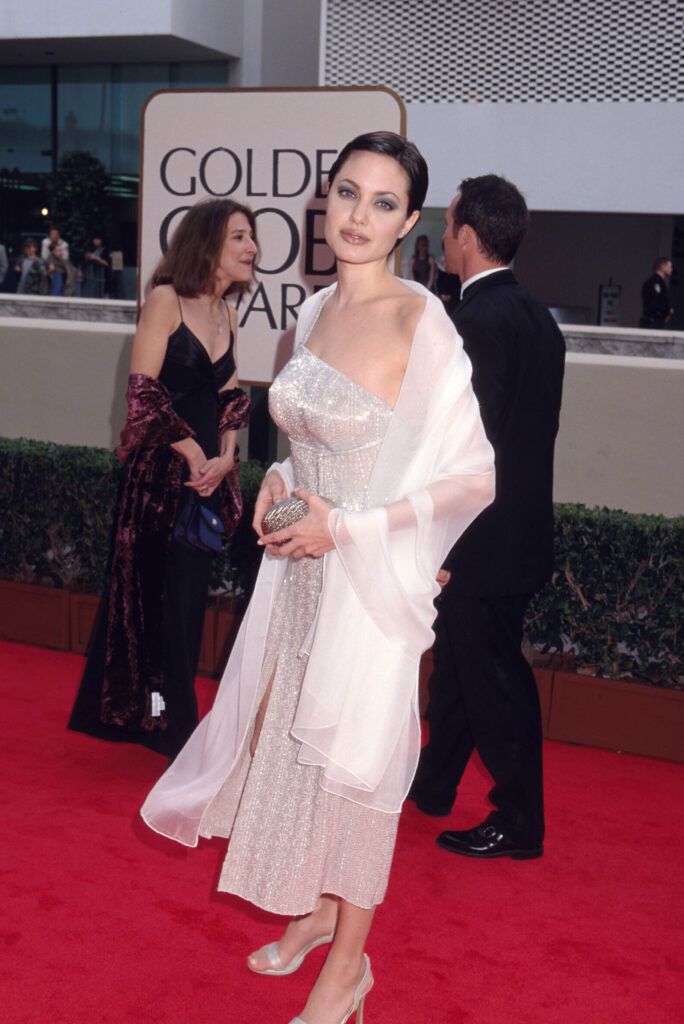 There’s no ’90s crew more iconic than the cast of Friends! Lisa Kudrow, who played Pheobe on the show, is spotted here at a red carpet in 1999 wearing a pink fuzzy jacket and mules. A look like this is totally something we could imagine celebrities wearing today, which is nostalgic to take a look back at and see how trends circle back into style. 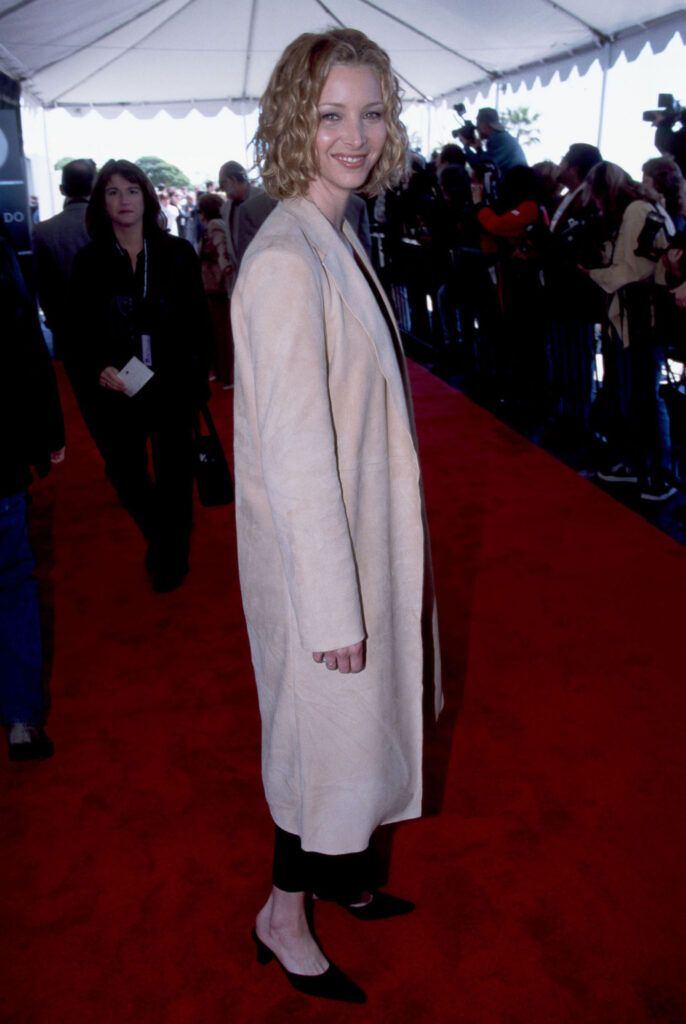 Another iconic group of TV friends from the ’90s was the gal pal cast from Sex and the City. Kristin Davis was one of the four leads and she was spotted in this rare red carpet moment back in 1995 at the Casino premiere. For the occasion, she rocked a black skirt suit with opaque tights. 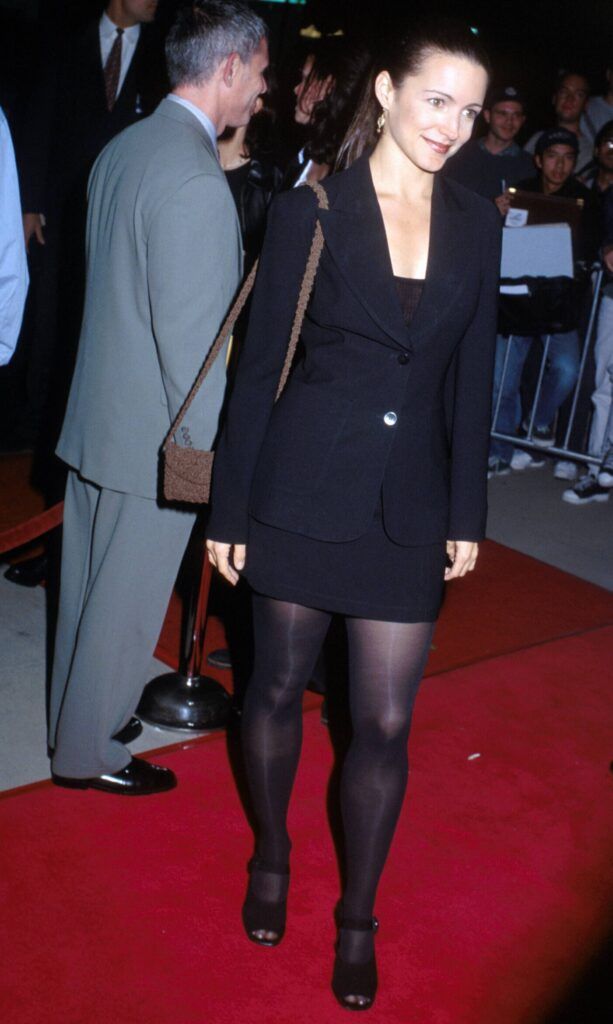 Nicole Kidman was a red carpet staple star back in the ’90s and continues to be one to this day. We always look forward to seeing what outfit she wears next but her elegant, feminine style has remained the same over the years. A rare red carpet moment many may have forgotten was when she stepped out at the 68th Annual Academy Awards in 1996 wearing this floaty violet dress paired with a chunky diamond choker. 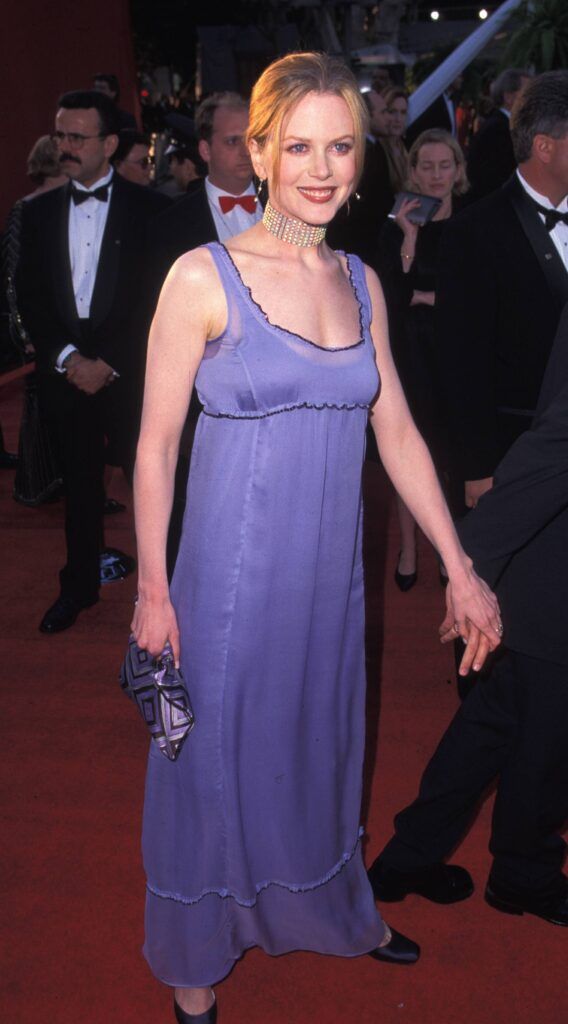 Of all the Sex and the City ladies, Carrie Bradshaw, aka Sarah Jessica Parker, most definitely had the most fame back in the ’90s. She was the show’s leading lady and had an eye for fashion like no other that often translated into her red carpet looks. Here, she was spotted at the 1993 Academy Awards with Matthew Broderick wearing a bronze sparkle slip dress paired with retro blue-tinted sunglasses. 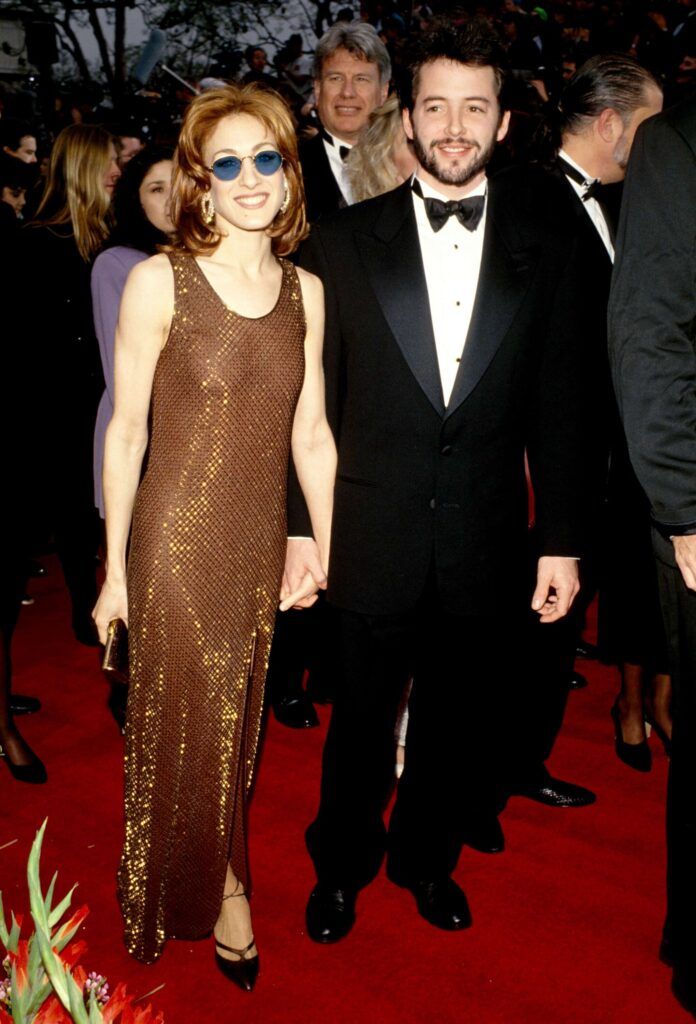 Another classic ’90s star is Courteney Cox who played Monica in Friends. She was spotted with Michael Keaton at The Paper Premiere back in 1994 where she opted for a cobalt slip dress. She paired the look with an unbuttoned shirt and nude mules. 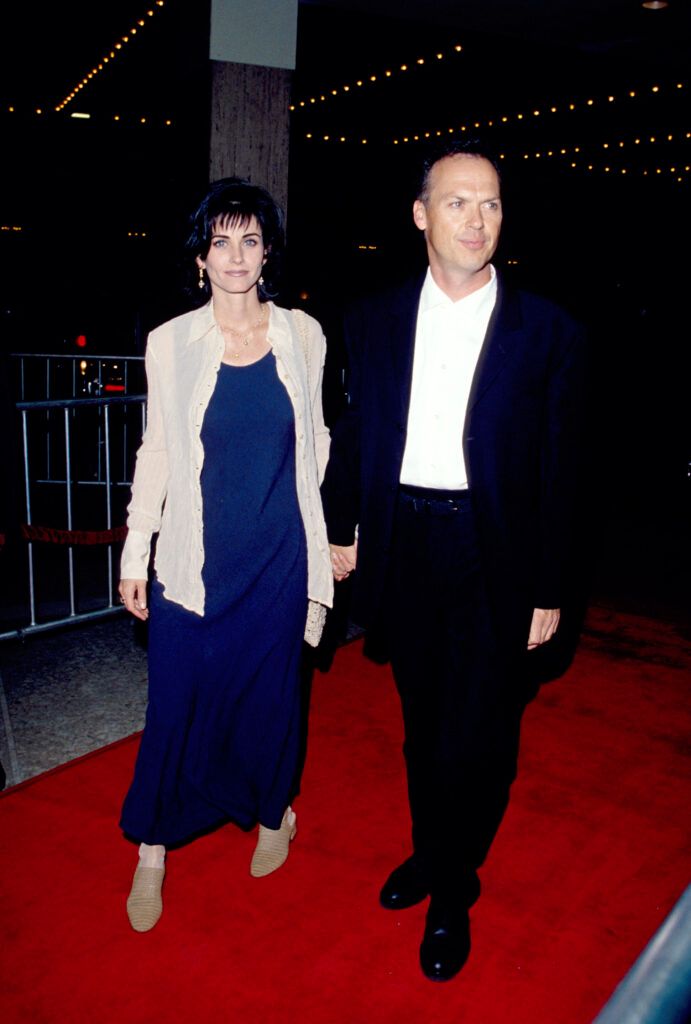 Heather Locklear was a red carpet all-star in the ’90s and a hugely popular actress, as she still remains today. Here, she was spotted twirling around the Golden Globe Awards in 1996 wearing a glittery silver dress with cutouts along the side. While this look was obviously worn more than 20 years ago, it’s still totally something we could imagine celebrities wearing on the red carpet today. 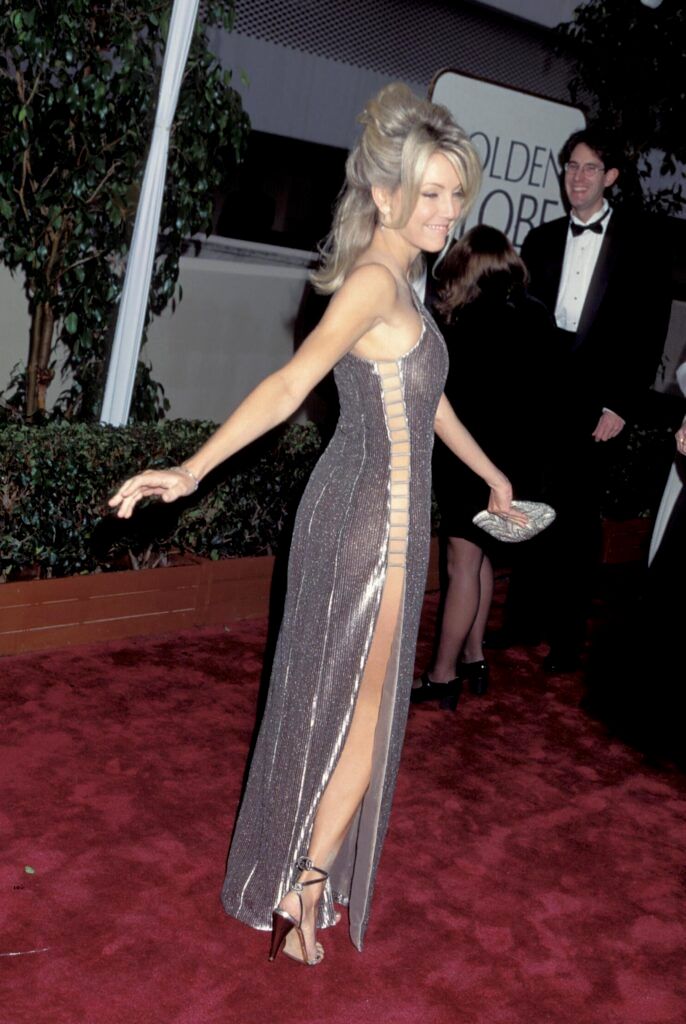 Sandra Bullock has been one of Hollywood’s most iconic stars since the ’90s and a red carpet staple star. Back in 1995, she was spotted walking the red carpet for The Net Premiere wearing a sleek pink satin dress. She has a youthful glow and the entire look rings very true to the style of the era. 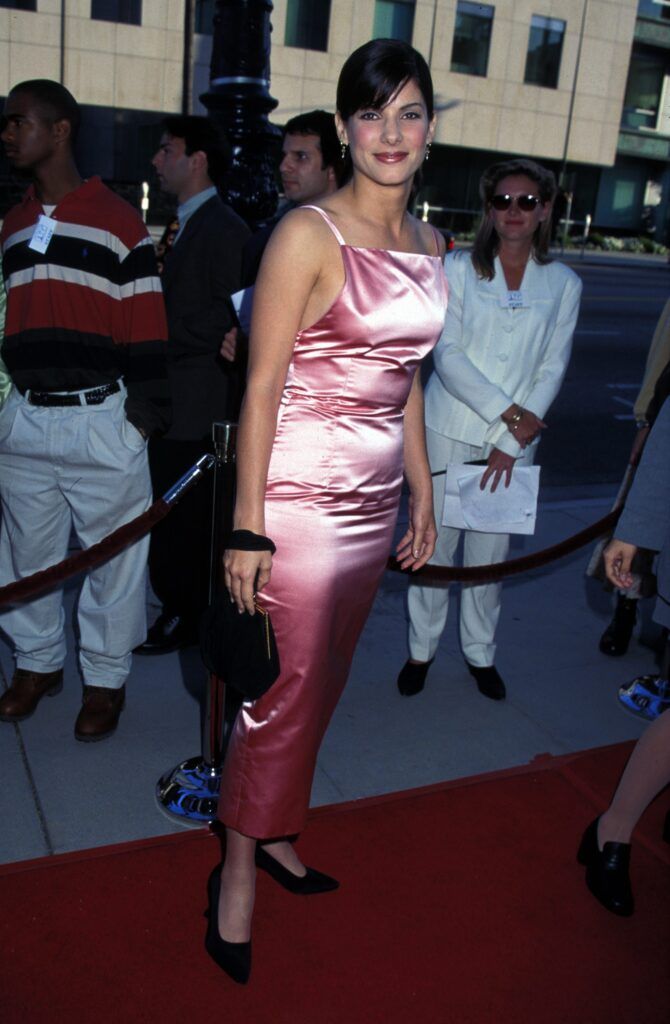 J.Lo is one of those celebrities who just continues to get even more beautiful year after year! Back in 1997, she was pictured here at the Anaconda premiere wearing a long sleeve bronze dress with a floral texture and her hair styled in tightly coiled curls. This look is definitely something we’d imagine on the red carpet today! 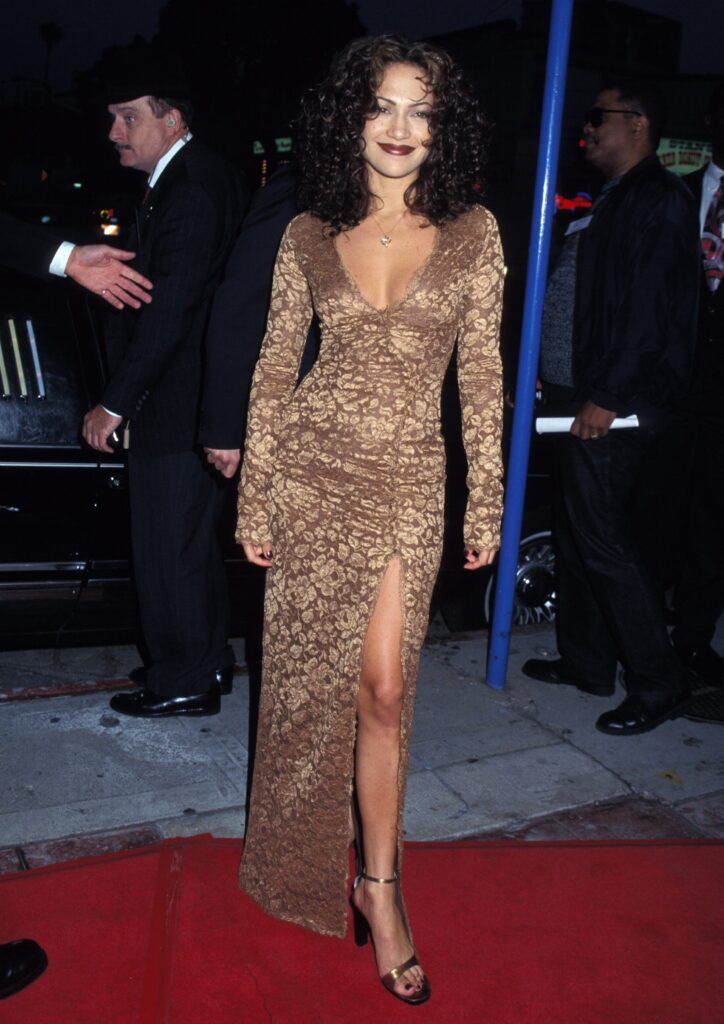 Halle Berry has been in the spotlight for years and has had more red carpet looks than we can count! One of her most iconic was from the ’90s was when she stepped out wearing a body-skimming lavender dress which featured floral embellishment on the shoulders and a long scarf detail which trailed behind her as a train. 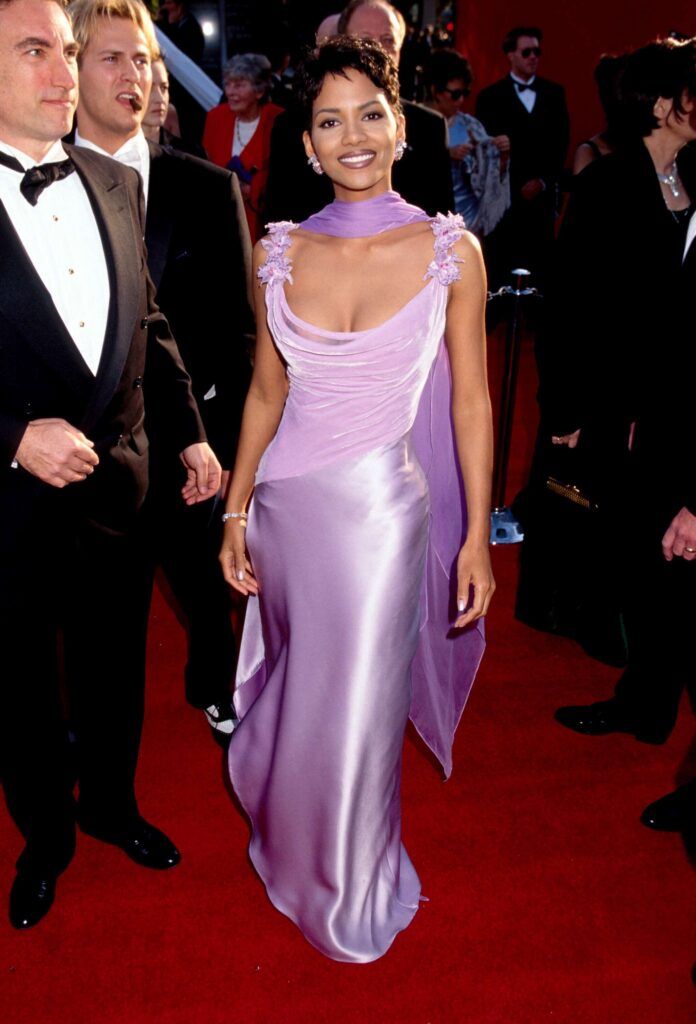 Drew Barrymore grew up in the spotlight since childhood, so we’ve definitely seen her go through quite a few phases both with her lifestyle and her style. This look she wore in 1993 to the Billboard Music Awards. She wore a silky blue slip dress, which was an iconic dress style in the ’90s, paired with a pearl choker. She styled her hair in cropped ringlets and opted for a brown-tinted lip. 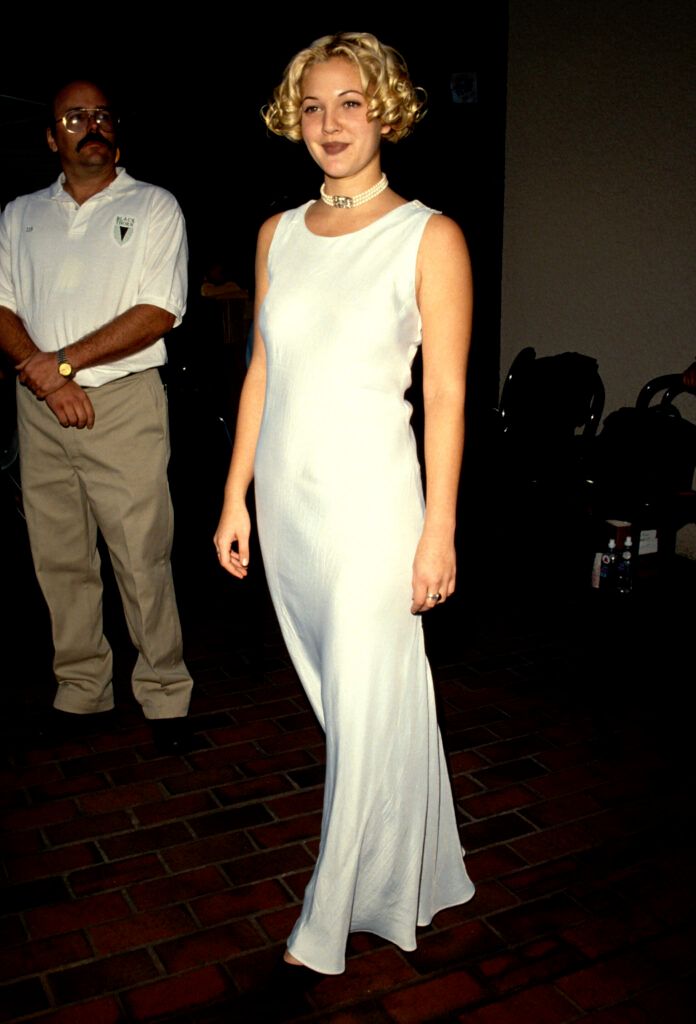 Julia Roberts never lets us down with her red carpet fashion and this was still true when it comes to her style in the ’90s! She is pictured here at the Conspiracy Theory premiere wearing a sleek little black dress and kitten heels. Her hair was styled in the classic flippy, layered ‘do that defined the decade. 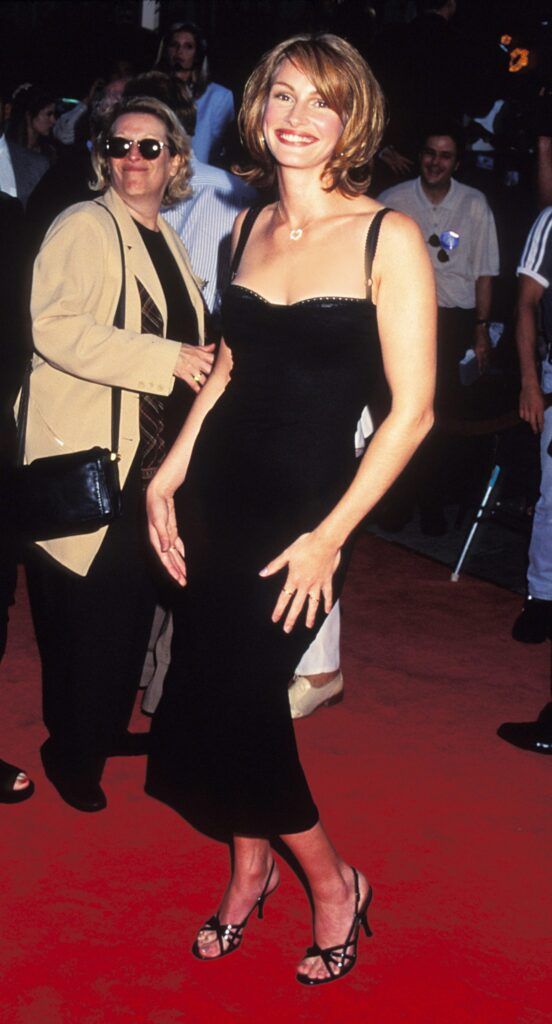 Drew Barrymore was one of Hollywood’s bad girls for quite some time and 1990 was a peak for this during her rebellious teenage years. She was spotted at the 1990 Marked For Death premiere wearing a printed dress with an edgy leather jacket layered on top. 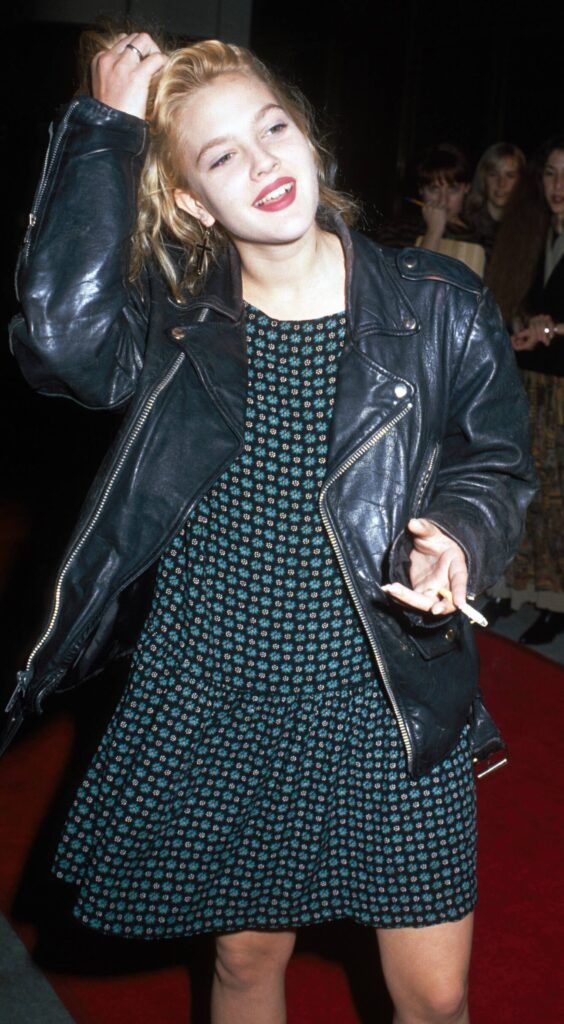 Kate Winslet is one of the most admired women in Hollywood and made a name for herself in her role as Rose in Titanic. Here, she is seen in a rare photo from the 68th Annual Academy Awards wearing a glamorous bubblegum pink dress paired with a magenta shawl. 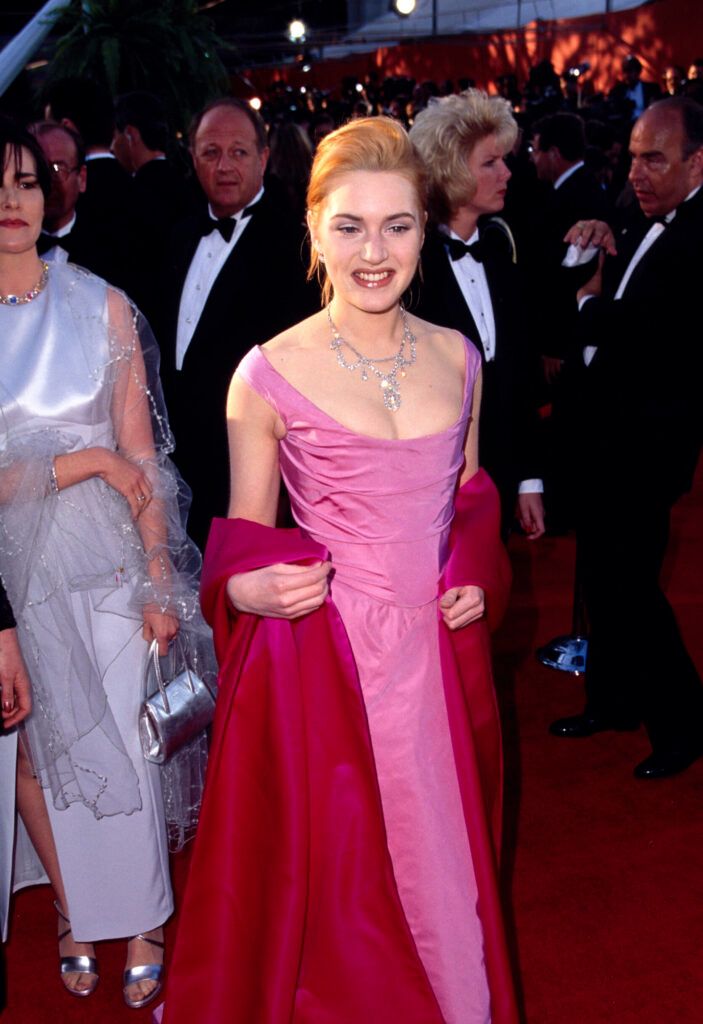 Leonardo DiCaprio and Kate Winslet walked the red carpet together at the 1998 Golden Globe Awards just shortly after the release of their hit film, Titanic. Winslet donned a black and nude lace gown while DiCaprio dressed in a sharp black tuxedo. 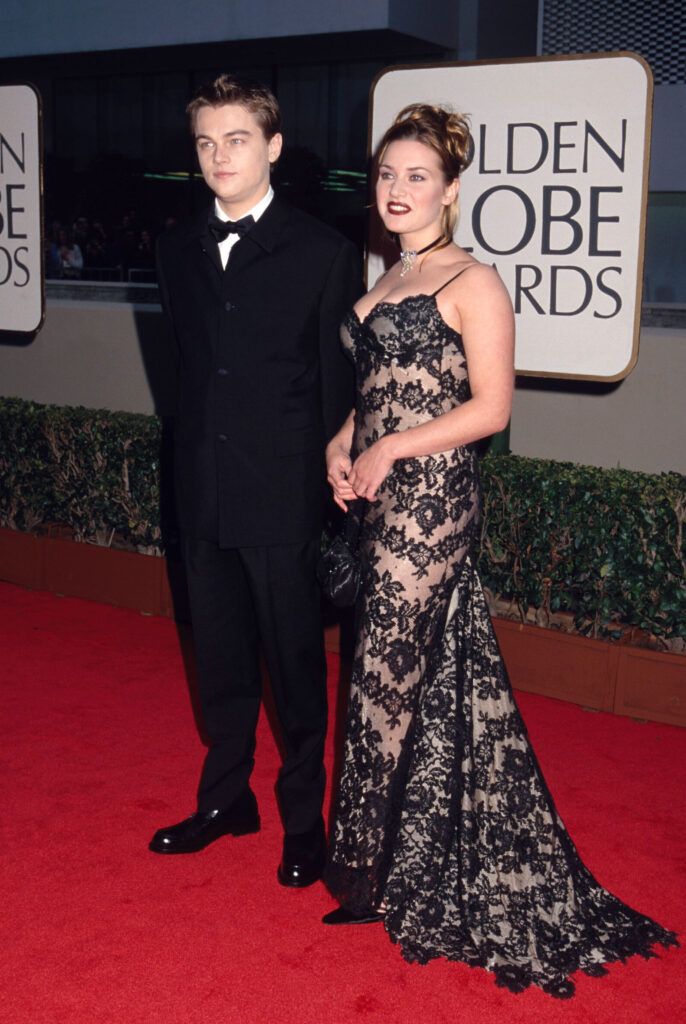 Gwyneth Paltrow was a huge fashion icon in the ’90s, and this outfit definitely rings true to her experimental, feminine taste. She was spotted in this rare photo from the 1997 Hard Eight premiere wearing a maroon floral dress with a fur collar. 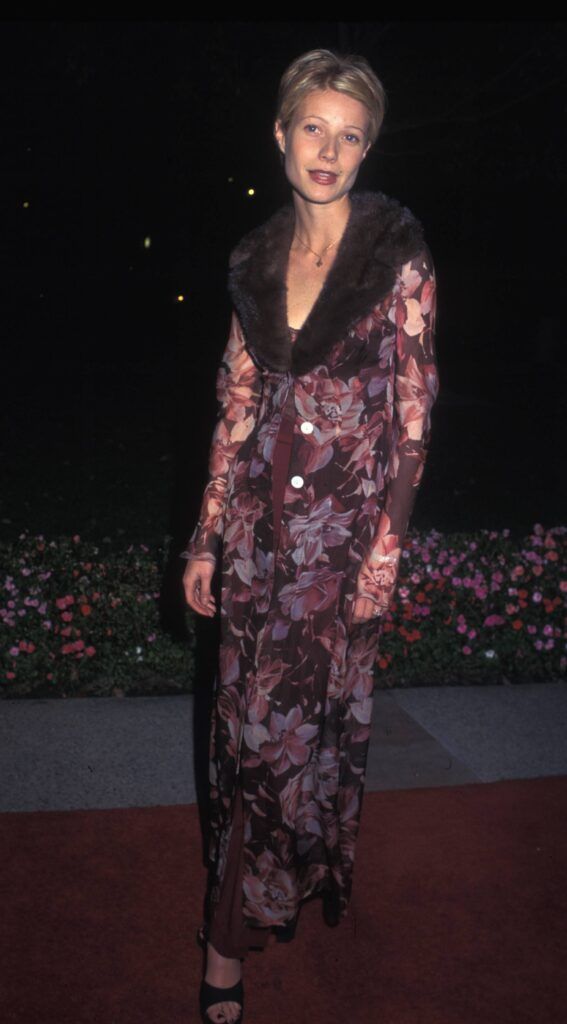 How could we reminisce on the ’90s without bringing up Jennifer Aniston? She became the golden girl of the decade and America’s sweetheart after taking on the role of Rachel in the popular TV series Friends. She’s photographed here at the Object of My Affection premiere wearing a body-skimming red dress with a sheer paisley pattern throughout. Mary-Kate and Ashley Olsen were the cutest duo back in the ’90s! They were thrust into the spotlight since their infant days starring on Full House and had a prosperous acting career well into their teenage years. This adorable rare photo of them shows the twins posing on the red carpet in 1998 for the Spice World premiere. We absolutely love their matching suits and hairstyles! 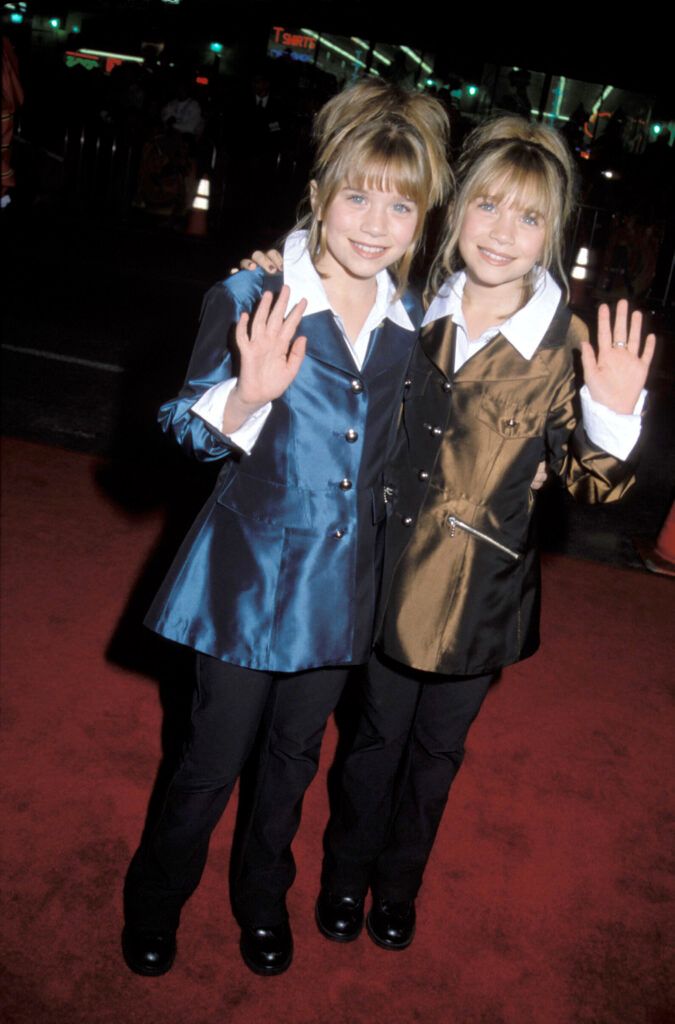 Reese Witherspoon was quite young in the ’90s but she still made a few early appearances on the red carpet. This rare photo was uncovered from 1999 where she attended the Cruel Intentions premiere wearing a magenta skirt paired over a white blouse.