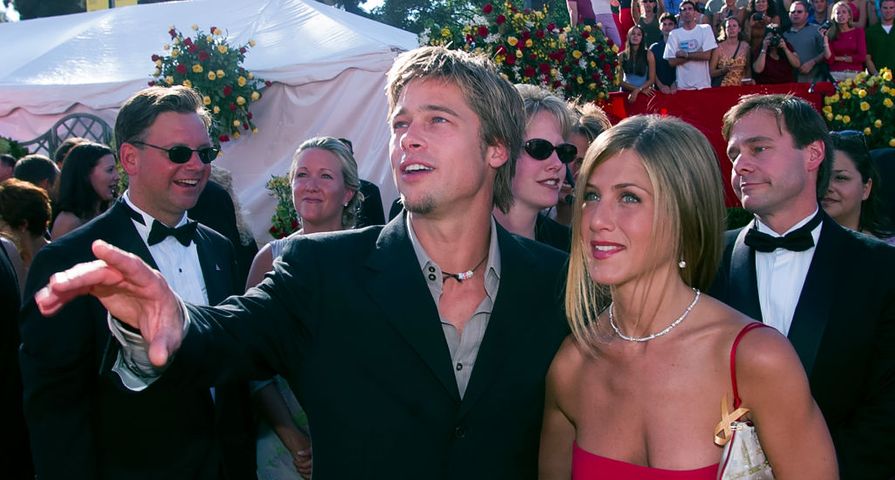 Hollywood it-couple Brad Pitt and Jennifer Aniston may have split decades ago, but that doesn’t stop fans from reminiscing on their relationship! The two A-listers wed on July 29, 2000, and had one of the most high-profile relationships in Hollywood. They were the superstar it-couple of the 90s and early 2000s, but ultimately called it quits after five years of marriage in early 2005. Pitt went on to marry Angelina Jolie, and Aniston wed Justin Theroux. Both couples have since split, which has had fans dreaming of a potential reunion between Brad Pitt and Jennifer Aniston, especially given J.Lo and Ben Affleck’s recent rekindling! If you’ve been rooting for Brad Pitt and Jennifer Aniston since the ’90s, follow along as we take a trip down memory lane and reminisce on some rare photos of the couple that you may have not seen before:

In November 2001, Jennifer Aniston and Brad Pitt attended the Spy Game premiere red carpet. Their looks for the occasion reflect the peak era of the early 2000s and late ’90s. Brad Pitt’s hair was messy and spiky and he rocked tinted sunglasses on the red carpet. Jennifer Aniston had her iconic layered hairstyle from Friends and smiled happily beside him for the photo opp. The couple was happily married at the time of this photo. 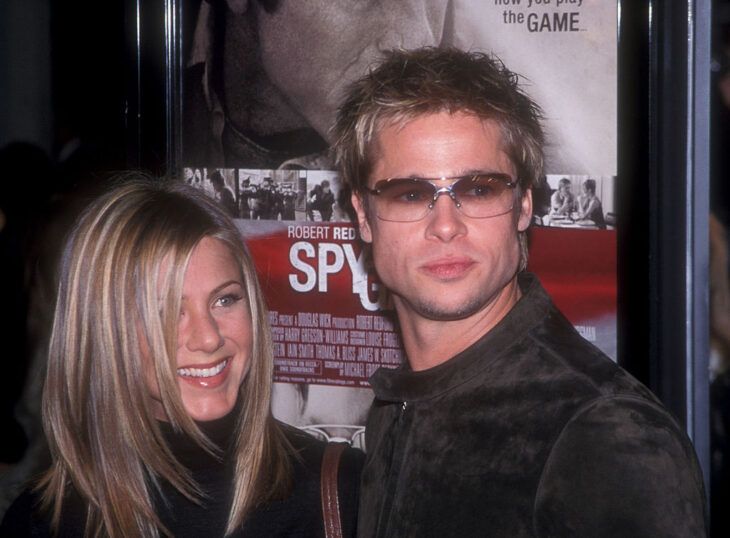 In 2004, Jennifer Aniston and Brad Pitt stepped out together to attend the Primetime Emmy Awards. In this particular photo, the it-couple is posing with Aniston’s Friends costar Matthew LeBlanc and his wife at the time, Melissa McKnight. The couple wrapped their arms around each other for the candid photo opp. For this formal occasion, Pitt opted for a sharp black tux with a bow tie, while Aniston donned a white slip dress with gold beading and styled her hair in iconic mid-2000s beach waves. 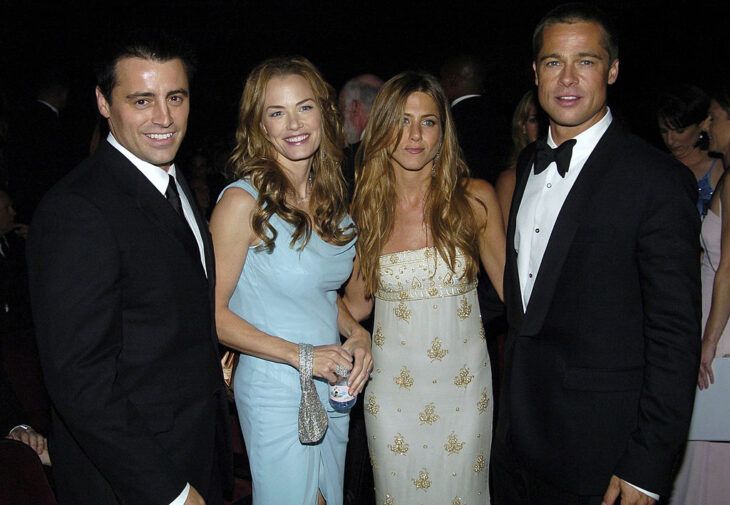 In January 2004, Jennifer Aniston and Brad Pitt were photographed walking the red carpet at the Along Came Polly premiere at Mann’s Chinese Theater. Jennifer Aniston starred in the film alongside Ben Stiller, Debra Messing and Philip Seymour Hoffman. For the red carpet premiere, Aniston opted for a simple black dress and wore her hair styled in round waves. Pitt opted for a navy blue suit which he styled with a wool scarf for a chilly January evening. 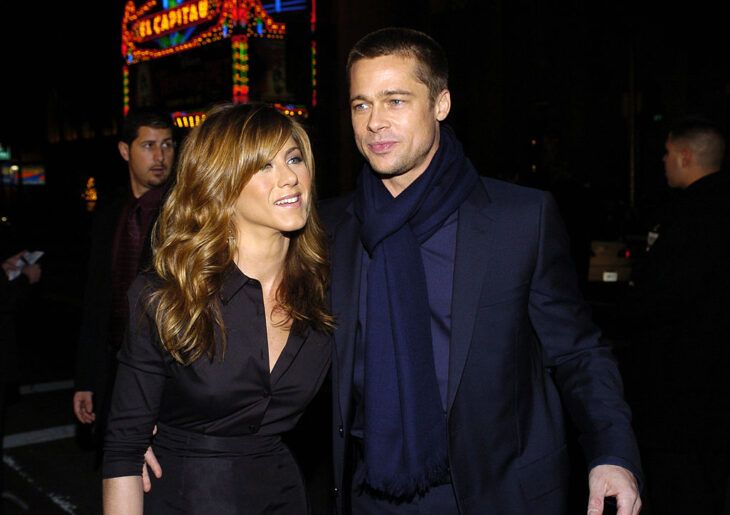 In 1999, Brad Pitt and Jennifer Aniston stepped out onto the red carpet at the Emmy Awards. This evening was a huge milestone in their relationship because it marked their first official appearance as a couple following many reports about their potential relationship. This photo of them is the picture of quintessential ’90s style with Aniston wearing her hair in small braids and Pitt channelling his inner Backstreet Boy with the messy hair and small sunglasses. This event will forever go down as one of their most iconic couple appearances together. 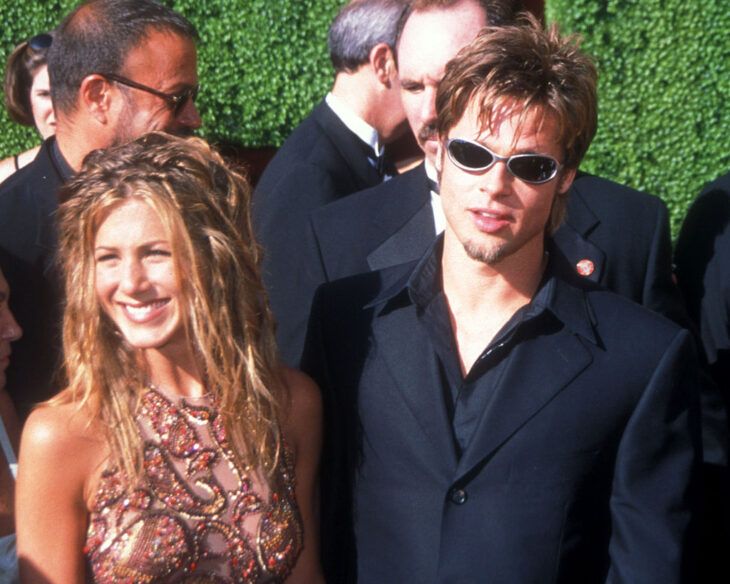 In January 2002, Jennifer Aniston and Brad Pitt attended The Good Girl premiere at the Sundance Film Festival. Aniston starred in the film alongside Jake Gyllenhaal and Pitt attended the event to support her. For the occasion, the couple looked cozy and casual with Pitt wearing an orange long sleeve and top hat, while Aniston dressed in all-black. In this photo, the couple is seen leaning together and smiling towards the camera. 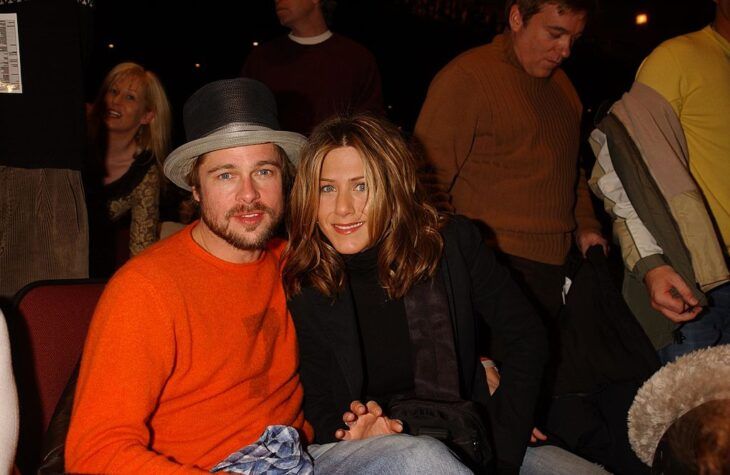 In 2004, Jennifer Aniston and Brad Pitt stepped out at the glamorous Cannes Film festival for the premiere of Troy at Palais Du Festival. Their debut at this event marked one of the most glamorous Cannes film festival moments of all time. For the occasion, Pitt opted for a sharp suit and black bow tie, while Aniston wore her hair sleek and straight and opted for a halter style white beaded dress. They truly look like the epitome of Hollywood glamour! 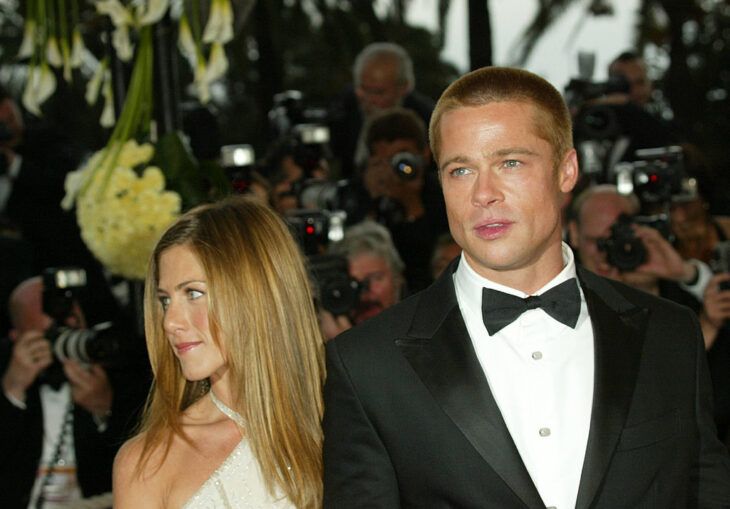 In August 2002, Brad Pitt and Jennifer Aniston posed for this photograph during The Good Girl Los Angeles Industry Screening at the Pacific Design Center in West Hollywood. Pitt changed up his look during this period of time and grew out a thick beard and shaggy hair. For the occasion, the couple dressed casually with Pitt opting for a button-up top and aviator-style sunglasses, while Aniston wore a black tank top and satin slip skirt. 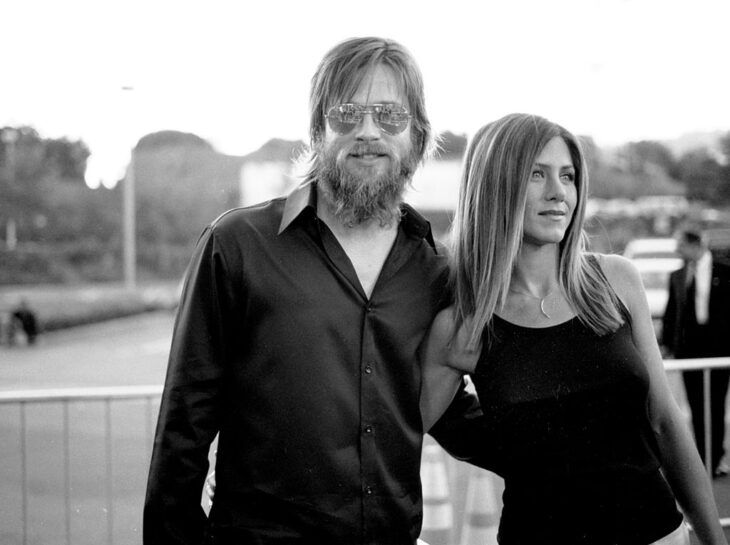 In 2001, Brad Pitt and Jennifer Aniston stepped out for the Los Angeles premiere of Rock Star. Aniston starred in the film alongside Mark Wahlberg and Jason Bonham. For the premiere, Pitt and Aniston seemed to channel their inner rockstar with their outfits. Brad opted for an edgy leather jacket which he paired with a purple button-up top and tinted sunglasses. Aniston opted for a chic all-black ensemble and seemed to have a subtle purple tint in her hair for the occasion as well. 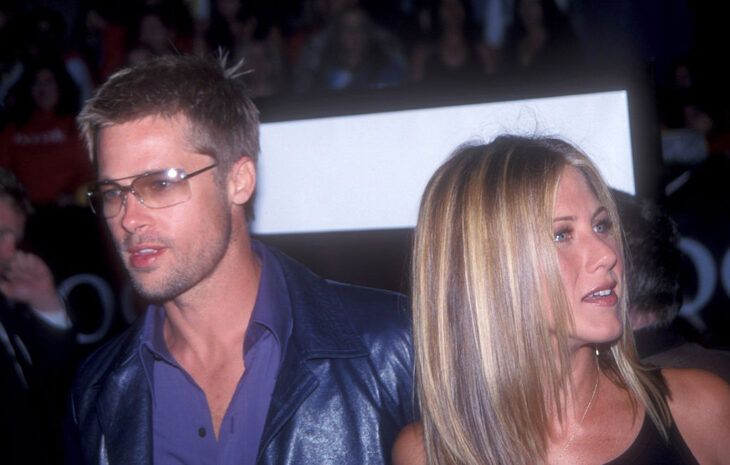 In September 2000, the iconic Hollywood it-couple stepped out at the 52nd Emmy Awards Show at the Shrine Auditorium. This outing occurred before the duo was married and fairly early on in their relationship. For the occasion, Aniston opted for a stunning red slip dress which she paired with a clutch and simple pearl necklace. This strawberry red color looks truly gorgeous on her and makes her sunkissed hair and blue eyes pop. Pitt opted for a simple suit which he paired with a grey button-up shirt which he left casually undone. 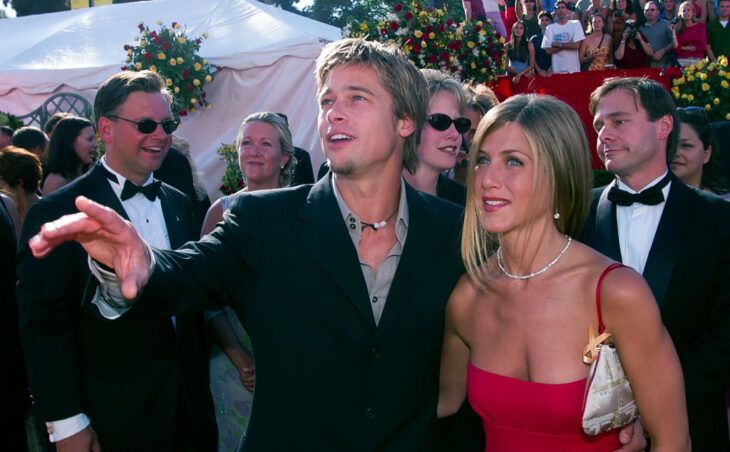 3. The Mexican Premiere in February 2001

Brad Pitt and Jennifer Aniston walked the red carpet hand-in-hand for the film premiere of The Mexican. Pitt played the role of  Jerry Welbach, a reluctant bagman, and starred in the film alongside Julia Roberts. For the red carpet premiere, Aniston and Pitt were all smiles when they were captured in this candid photo. For the occasion Jennifer opted for a simple white slip dress with a sophisticated blazer, while Pitt opted for a brown layered outfit. We love Jennifer’s layered hair in this era, which quickly became a major trend in the early 2000s. 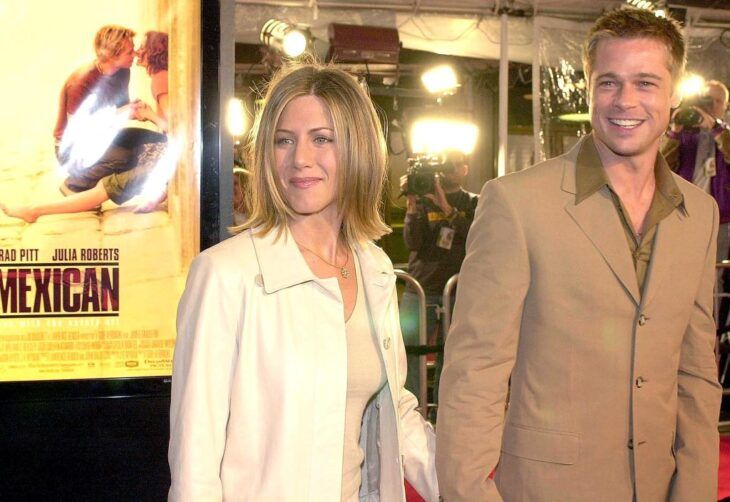 2. The Bourne Identity Premiere in June 2002

In June 2002, Jennifer and Brad appeared at the premiere of The Bourne Identity at the Universal CityWalk in Los Angeles. For the occasion, Pitt opted for a grey suit and top hat, while Jennifer wore a navy blouse and styled her hair in loose, beachy waves. While neither Aniston or Pitt starred in the film, the two still made an appearance to show their support. This was definitely an interesting era when it comes to Pitt’s style since he completely changed up his look with long hair and a thick beard. 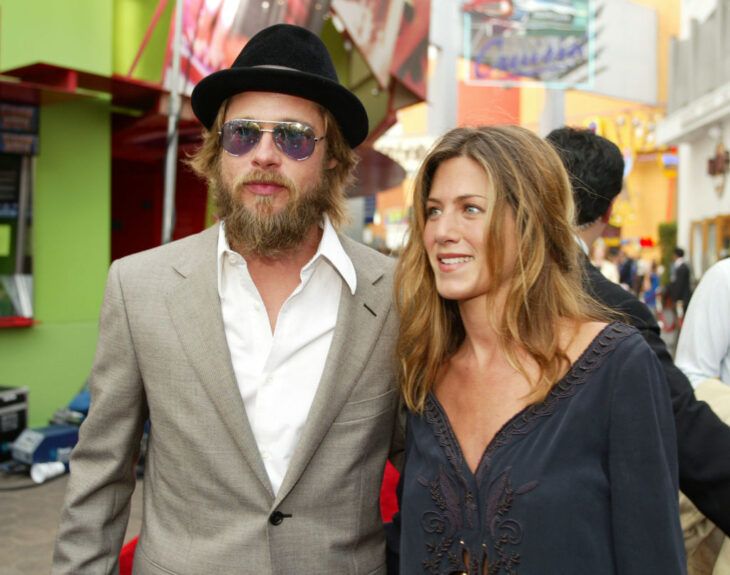 1. The Barfly Nightclub in February 1999

During their early dating months, Pitt and Aniston were photographed outside The Barfly nightclub after Pitt threw her a huge 30th birthday party. In the candid photo, Aniston is carrying a large bouquet of flowers with Pitt standing behind her. The special party was to celebrate Aniston’s milestone 30th birthday where Pitt took her and a group of friends to Acapulco for a special celebratory weekend. 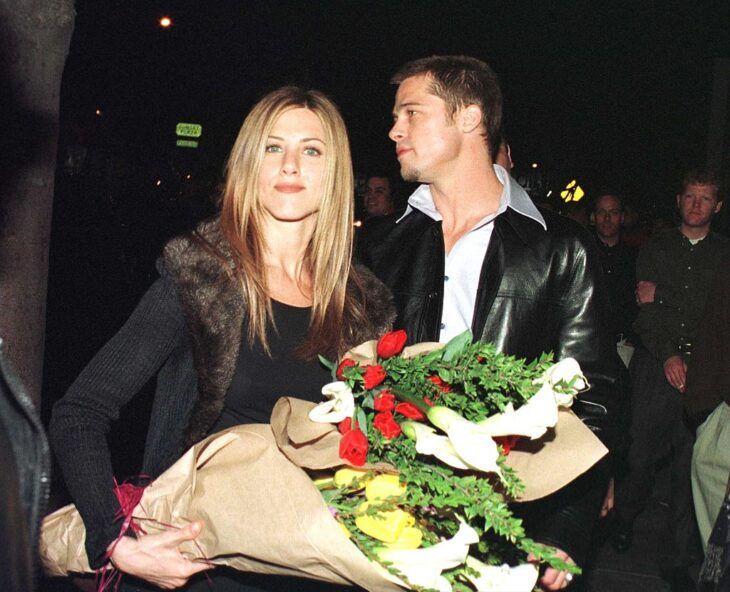