Rare Photos Of Kate Middleton Before She Was A Princess 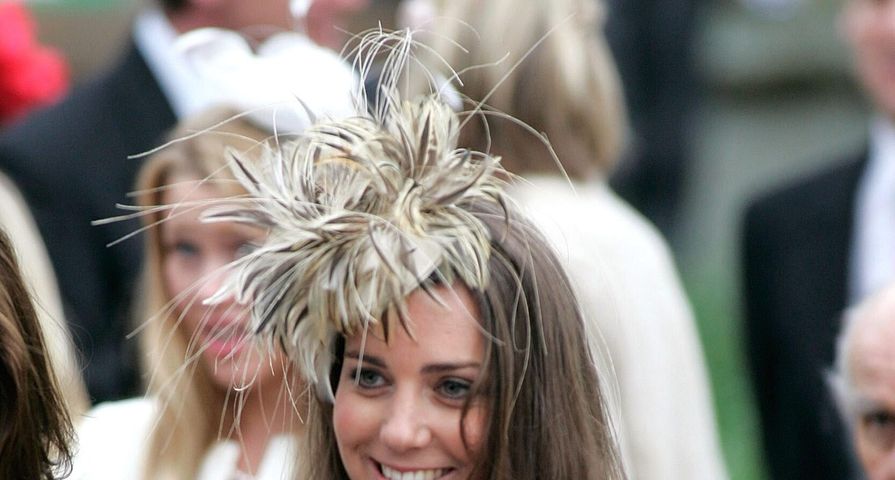 During Kate Middleton and Prince William’s courtship, she was a constant target for the paparazzi. As a result, there are tons of pictures of her from that time period and not everyone has seen them. Check out these rare photos of Kate before she was a princess:

Middleton was at the Sony Ericsson WTA Tour’s pre-Wimbledon party where she looked to be having a really good time. She was photographed dancing at one point with one of Prince William and Prince Harry’s friends, Guy Pelly. 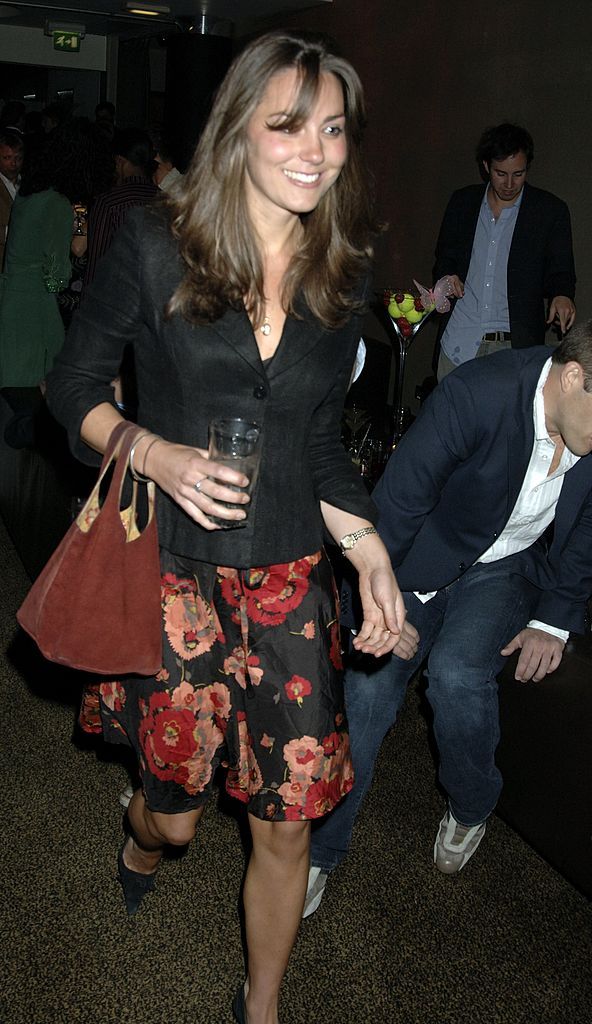 Kate and her brother James attended the Concert for Diana at Wembley Stadium in London in 2007. This was the first time she and William were spotted in the same vicinity since their breakup earlier that year. Her presence at the concert made it clear that they were back on. 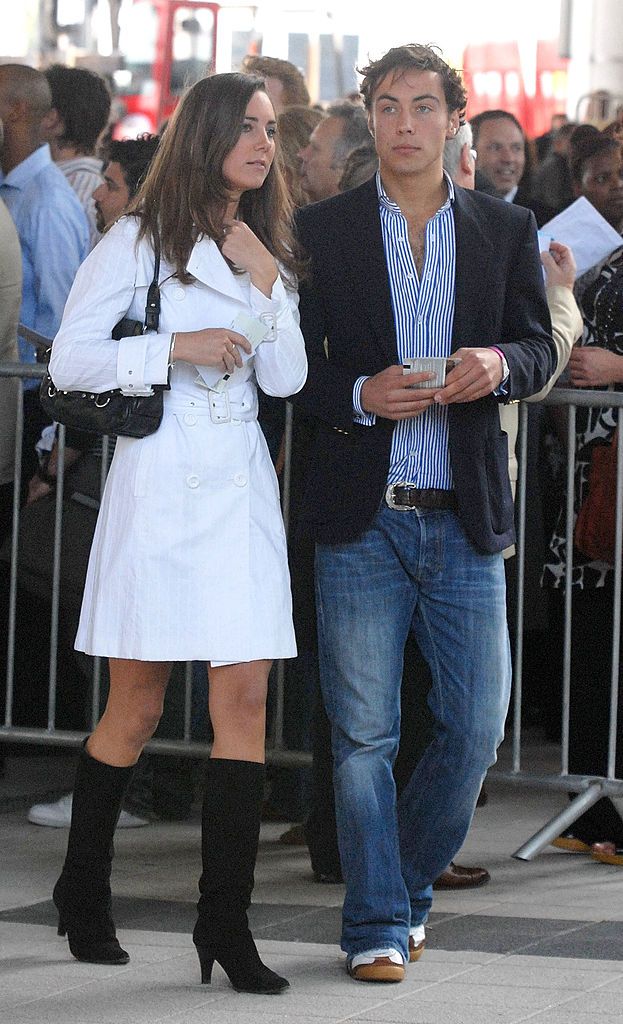 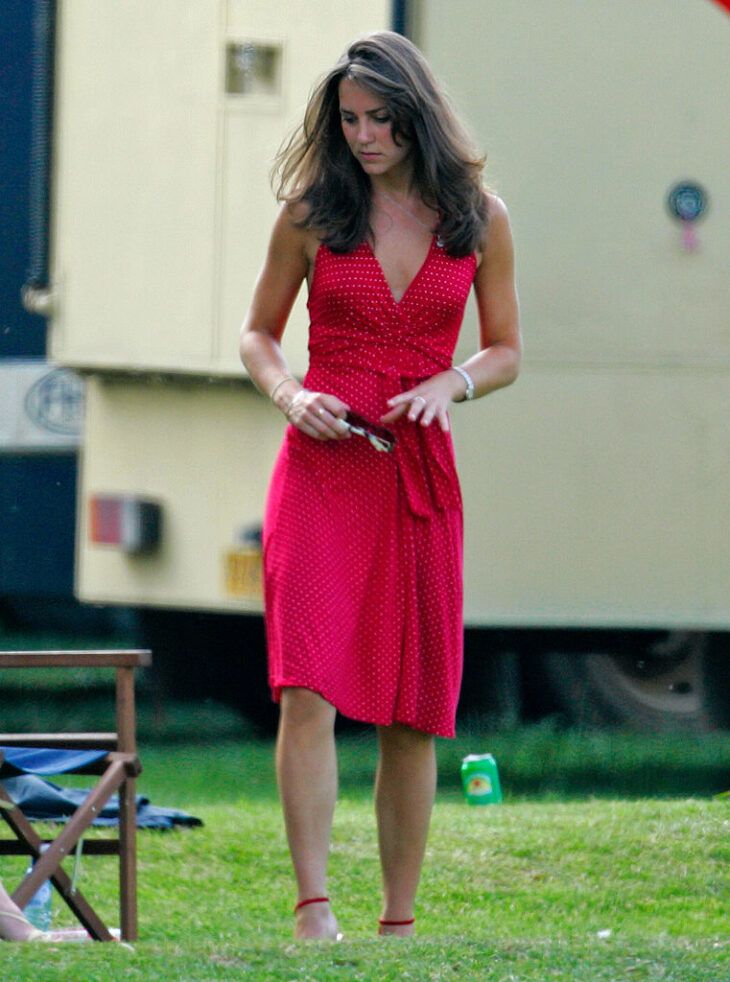 Middleton was spotted at the Beaufort Polo Club in 2007 with Prince Harry’s girlfriend at the time, Chelsy Davy. The two were watching their royal boyfriends play in a charity polo match. Middleton looked super preppy in this cream-colored sweater with a dark pair of jeans. 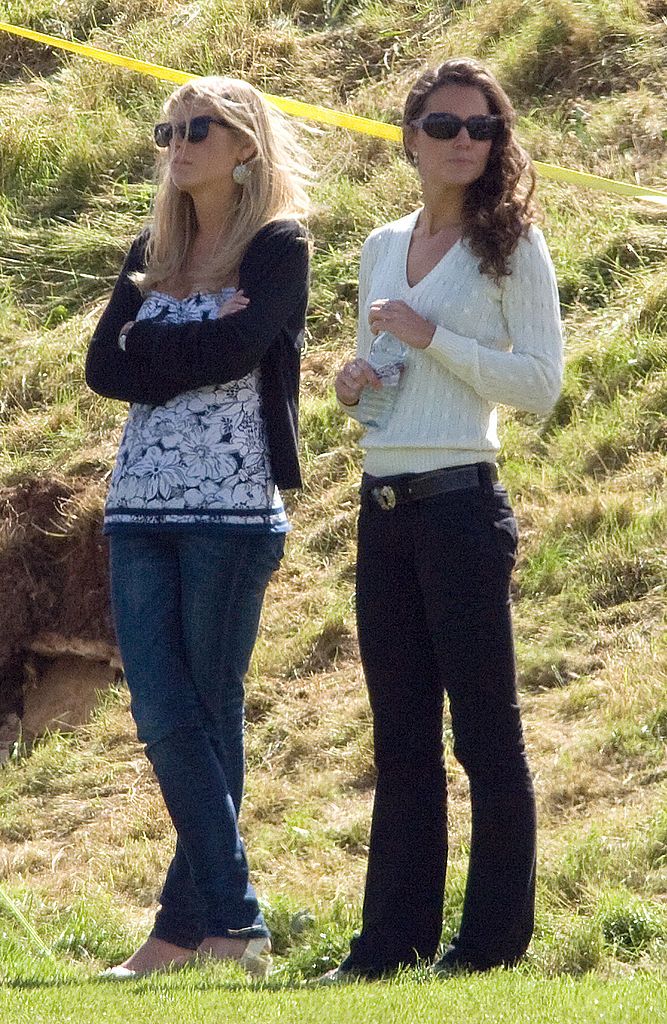 Middleton made her public debut as Prince William’s girlfriend at the wedding of Hugh Van Cutsem and Rose Astor at Burford Parish Church in Burford, England in June 2005. She looked so sophisticated in this cream coat with a black and white skirt and a fancy black fascinator.

The fashionable brunette beauty joined Prince William at Nicholas van Cutsem’s wedding to Alice Hadden-Paton in 2009. She looked lovely in this lavender coat dress with a fascinator that perfectly coordinated with her outfit. 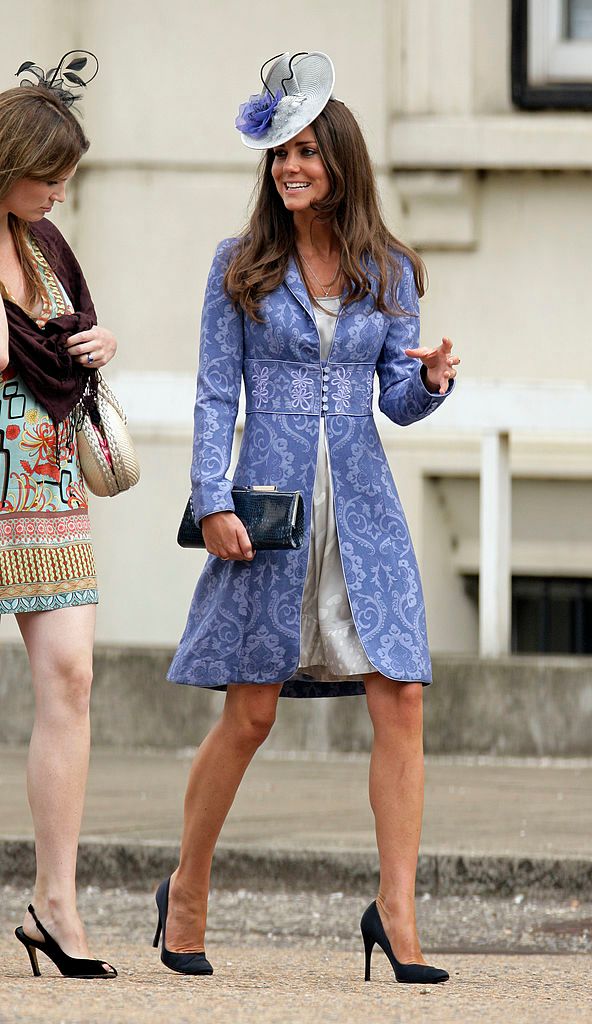 After her breakup with William in 2007, beautiful Kate didn’t waste her time wallowing. Instead, she joined the sisterhood, a group of female athletes who were training to become the first all women crew to cross the Channel in a traditional Chinese dragon boat. 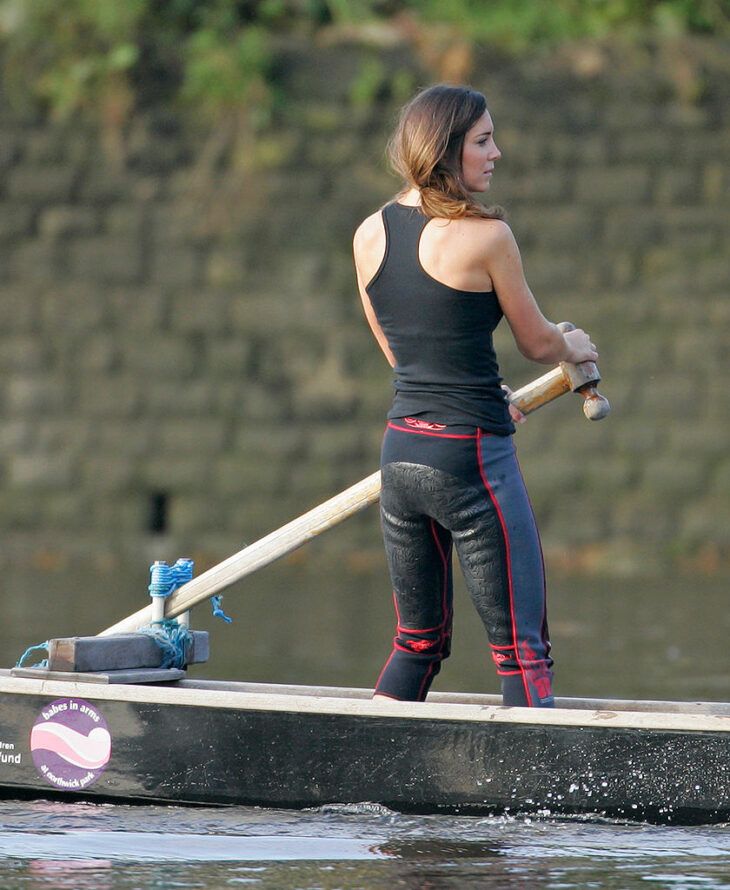 Kate attended the after-party following the opening night of the musical Afrika Afrika in January 2008. She was with one of Prince William and Prince Harry’s friends, Guy Pelly. The two were spotted seated together along with another friend.

Kate attended a launch party in 2006 for the opening of the King’s Road shop, Bluebird. She dressed to impress in this colorful dress, which featured pink, purple, blue and yellow flowers with a light pink blazer, a dark pink purse and purple shoes.

The gorgeous brunette attended the Cheltenham Horse Racing Festival in style in March 2007. She rocked this asymmetrical brown skirt with a pair of brown boots, a baby blue coat with brown detailing, and a brown beret. She topped the look off with a pashmina scarf. 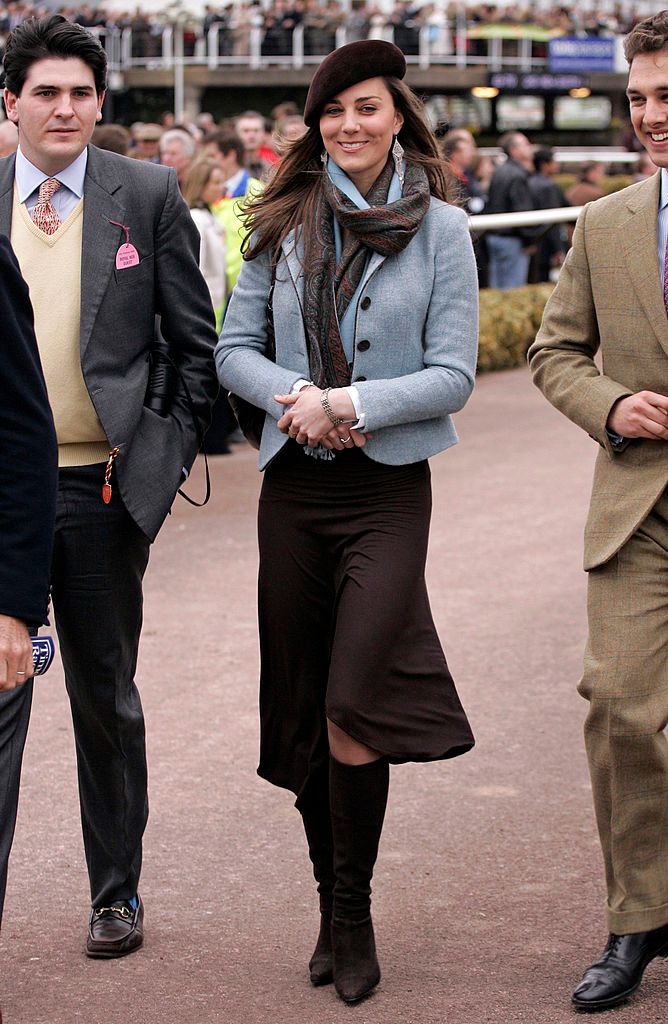 Kate was at the Order of the Garter procession at St. George’s Chapel, Windsor Castle in 2008 where she was photographed with Prince Charles’ wife Camila Parker-Bowles. There were other photos of her with Prince Harry as well. This was a pretty big deal. She had clearly been accepted into the royal fold. 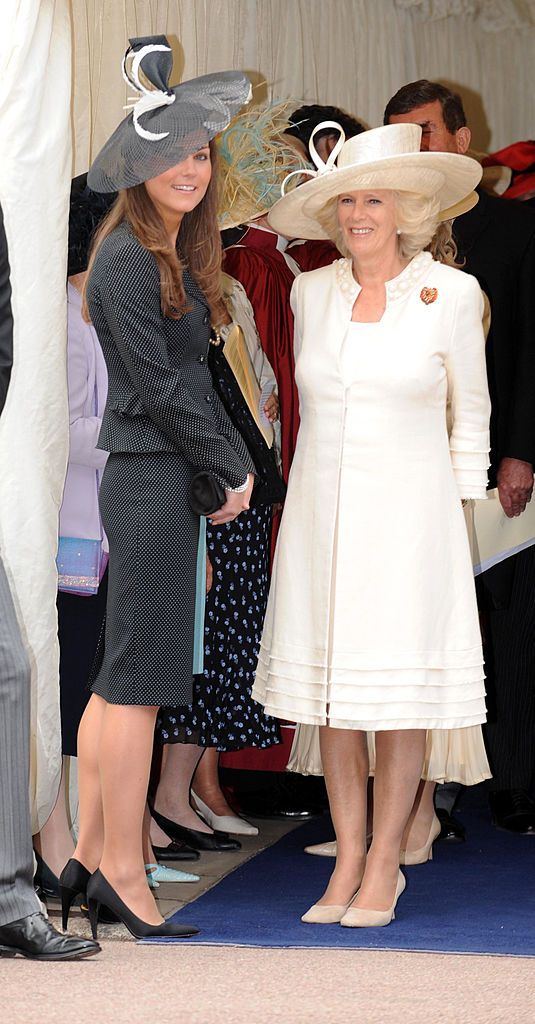 While Middleton seemed keen on competing with the Sisterhood in 2007, after she got back together with Prince William, she pulled out the competition, which upset some of the members of the Sisterhood. According to the organizer Emma Sayle, no one heard from her again. 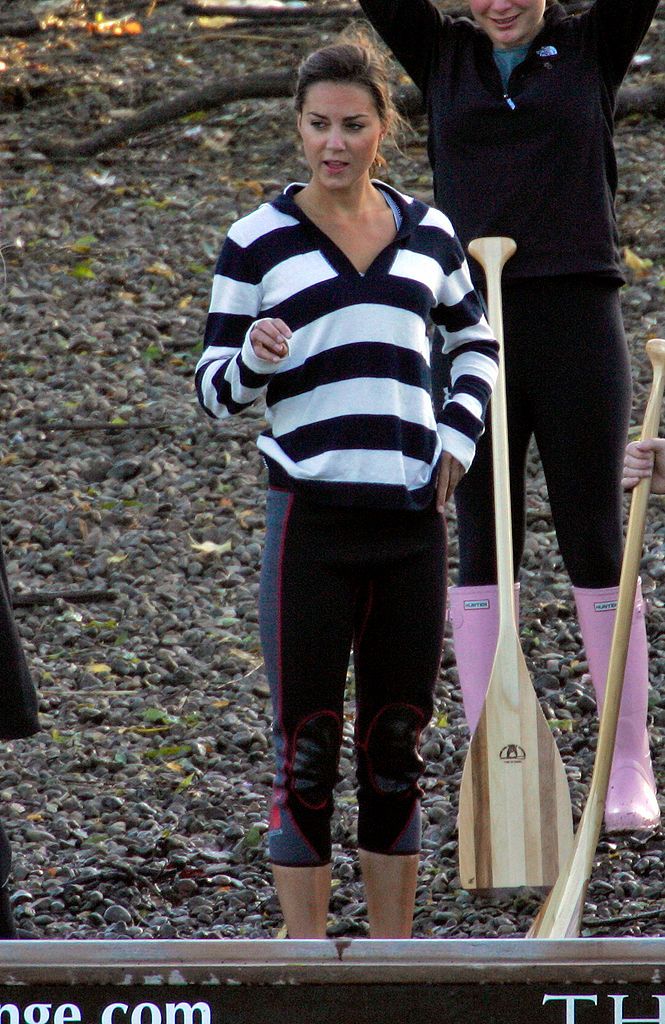 After graduating from the University of St. Andrews in 2005, Middleton attended the Gatcombe Park Festival of British Eventing at Gatcombe Park with her mother, Carole. She looked super casual in this brown jacket, turquoise sweater, brown hat and blue jeans. 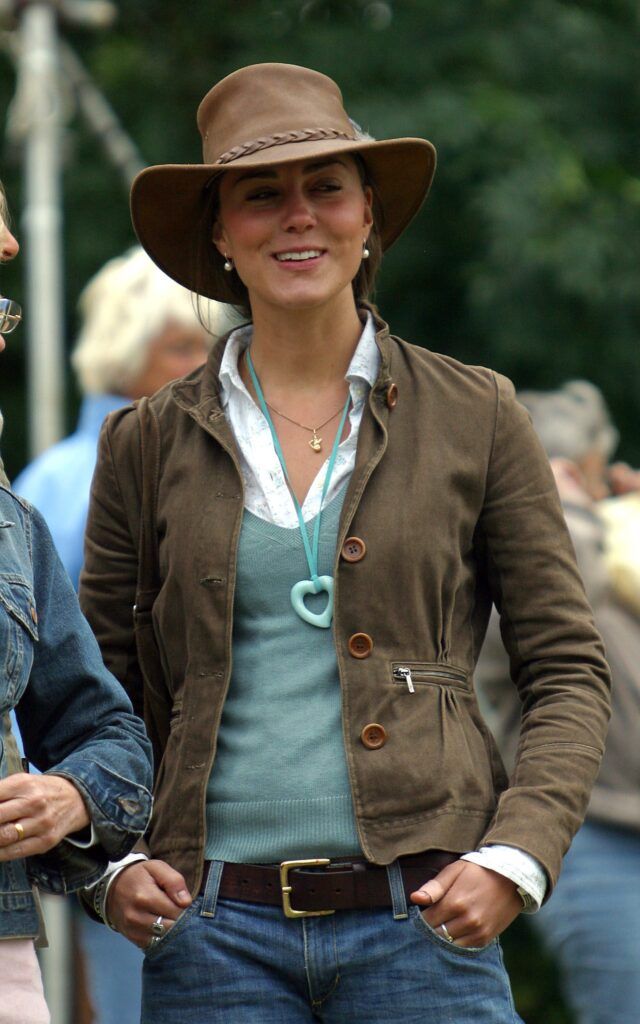 Middleton watched Prince William and Prince Harry play in the Chakravarty Cup Polo Match in 2009. She looked nice and relaxed in a pair of dark jeans a grey sweater as she chatted with some other onlookers.

The tall brunette attended the wedding of Lady Rose Windsor and George Gilman, which took place at Queens Chapel in London in 2008. She was without her prince, but she still looked lovely in this light blue blazer and pastel-colored dress. 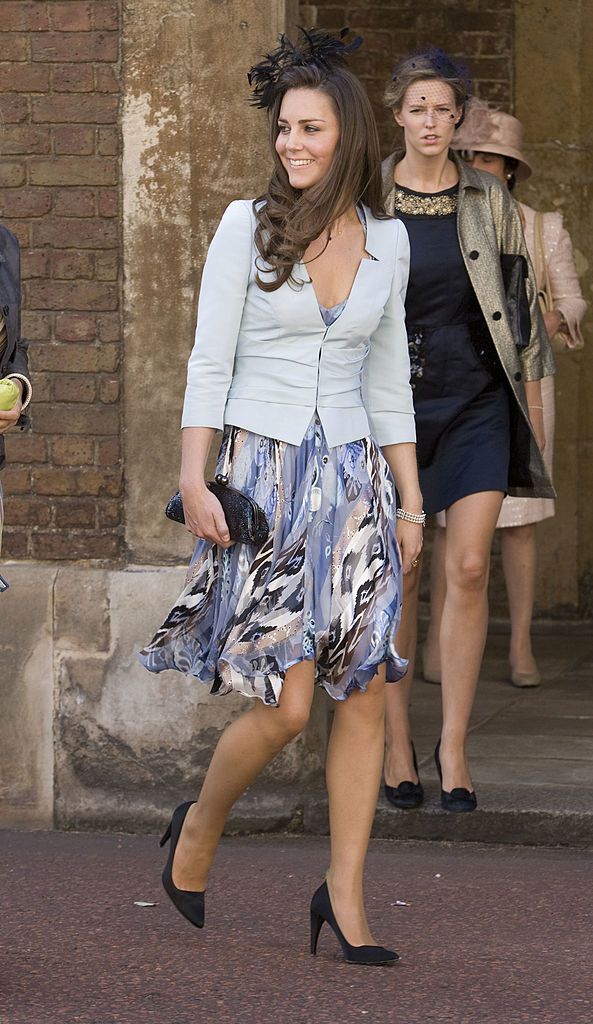 The Duchess of Cambridge showed up for day six of the Wimbledon Lawn Tennis Championships in 2008 with a few girlfriends. She looked lovely in a pretty white dress with a simple black cardigan. 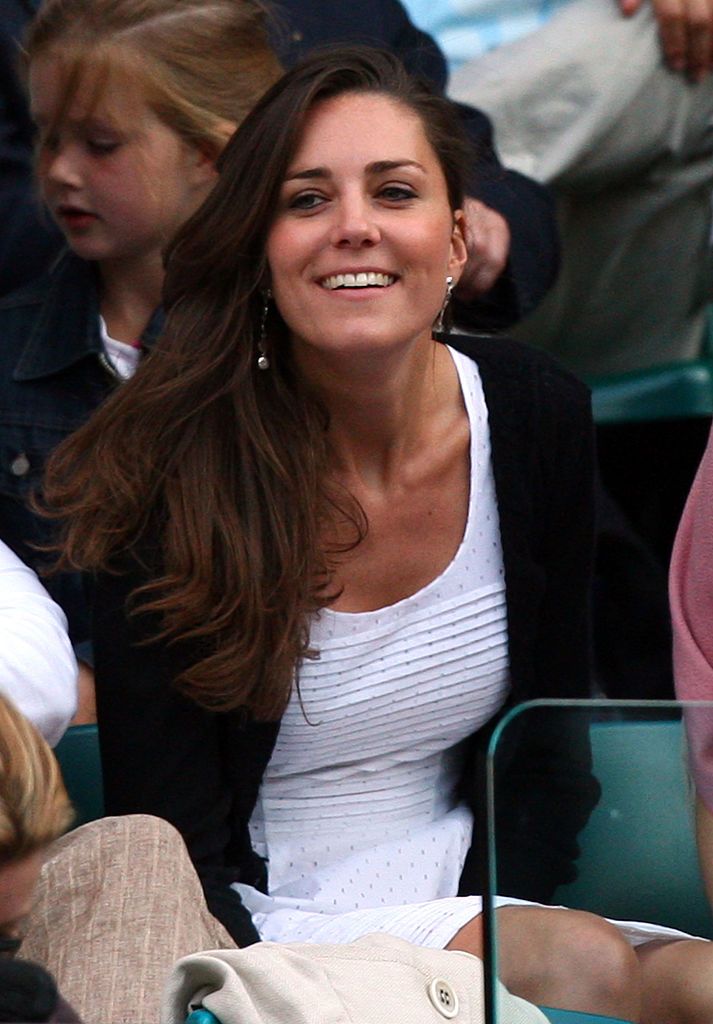 In 2010, Kate wore a pretty green dress to watch Prince Harry and Prince William play polo in the Chakravarty Cup polo match at the Beaufort Polo Club, England. She looked happy and relaxed, and some wondered if a royal engagement was coming. Less than six months later, she and Prince William announced that they were engaged.

Middleton attended a concert in celebration of Nelson Mandela’s life at Hyde Park in 2008. It looked like she was having a really good time. She was with a couple of guys and was pictured laughing and drinking. 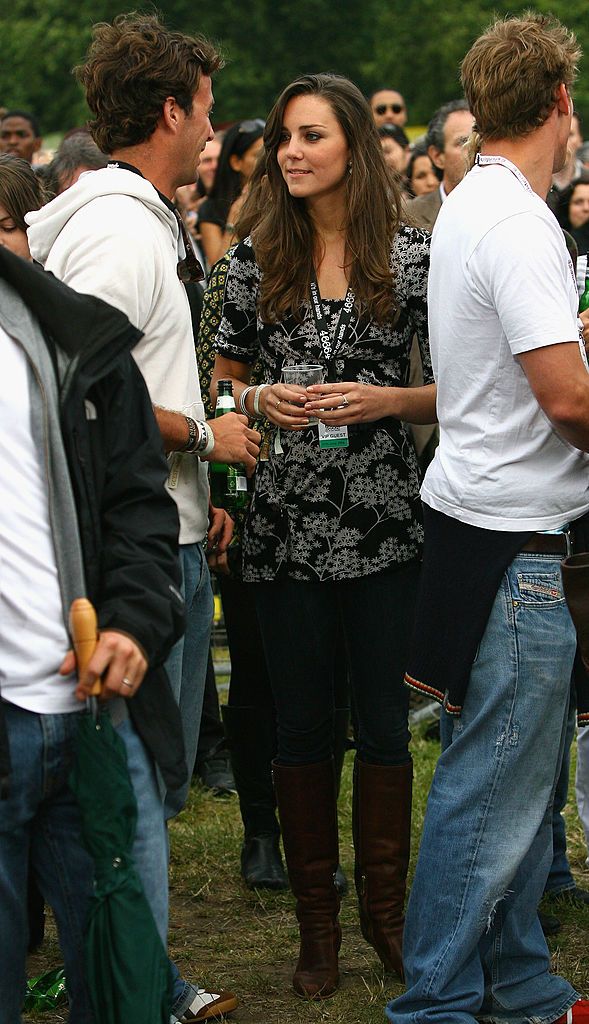 The brunette beauty was at Coworth Park near Windsor watching Prince William participate in a polo match. She looked effortlessly fashionable in this beige blazer with a black shirt, a tight park of dark jeans and a pair of black heeled boots.

Kate and her sister Pippa appeared at the book launch for photographer Alistair Morrison’s book a Time to Reflect in 2007. She looked gorgeous in this silky grey dress and accessorized with a chunky necklace. 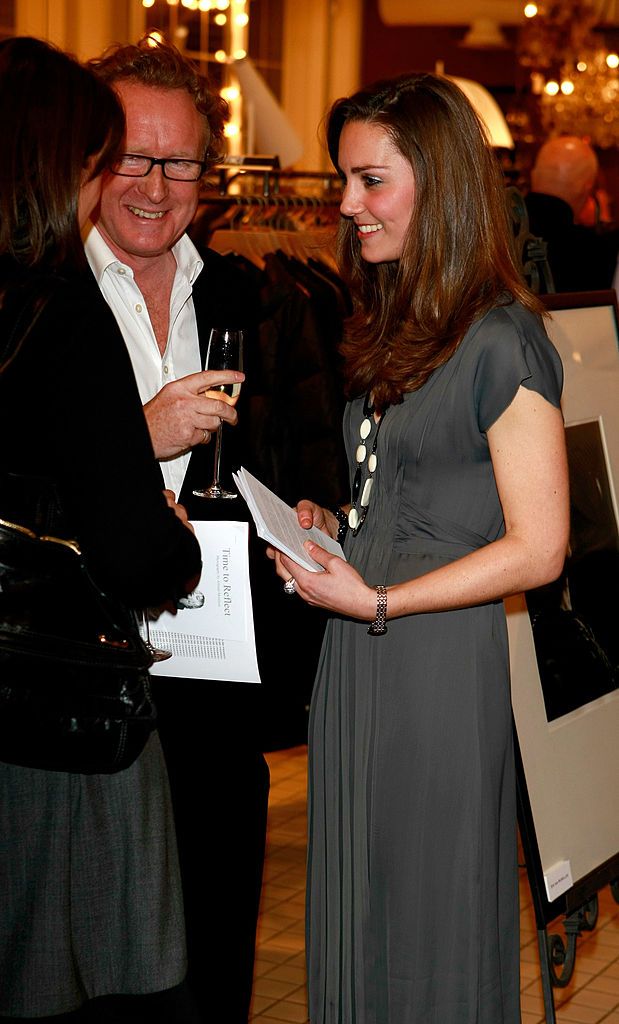 In 2007, Middleton attended the first day of the Cheltenham Horse Racing Festival with Prince William. She wore this brown tweed skirt suit, which looked a little dowdy in comparison to her other outfits. The Duchess of Cambridge and her younger sister Pippa watched Prince William play in the Eton College Old Boys Field Game in Berkshire in 2006. Here they are enjoying a casual walk as they wait for the game to finish up.

Kate attended The Rundle Cup Day at Tidworth Polo Club in 2006 where she was spotted chatting with Chelsy Davy and Zara Phillips. We love her relaxed summer look with the halter dress and wedges! 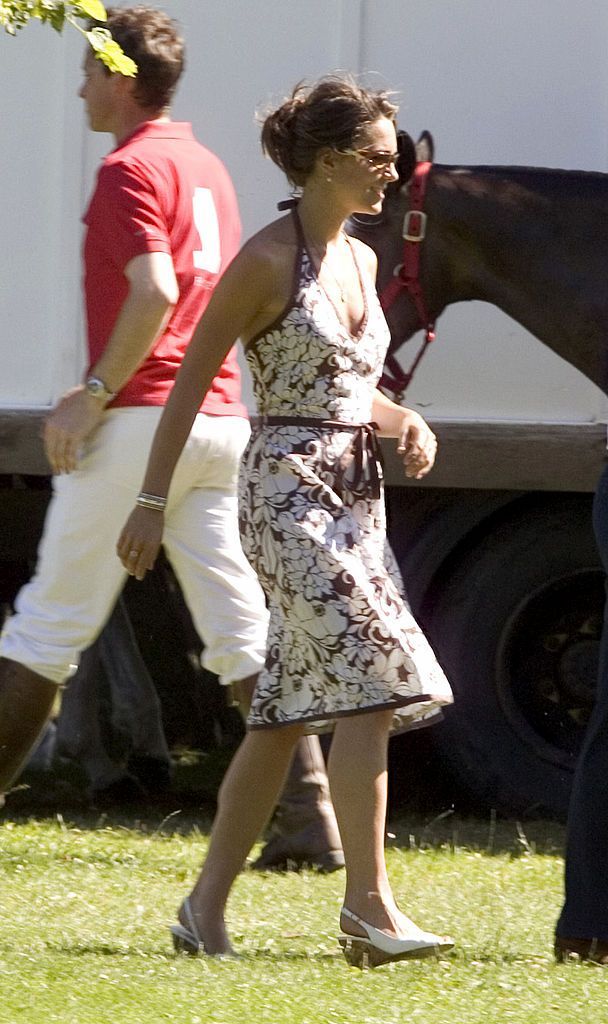 The brunette beauty was joined by Prince Harry’s girlfriend-at-the-time, Chelsy Davy at The Beaufort Polo Club. The two were watching Prince William and Prince Harry play in a charity polo match and seemed to be having a really good time.

When Prince William graduated from the Royal Military Academy Sandhurst, his girlfriend was there with her parents watching. She showed up in a red wool coat and a large black hat. The fact that she was there was a big deal and had some speculating that the two might be getting engaged. 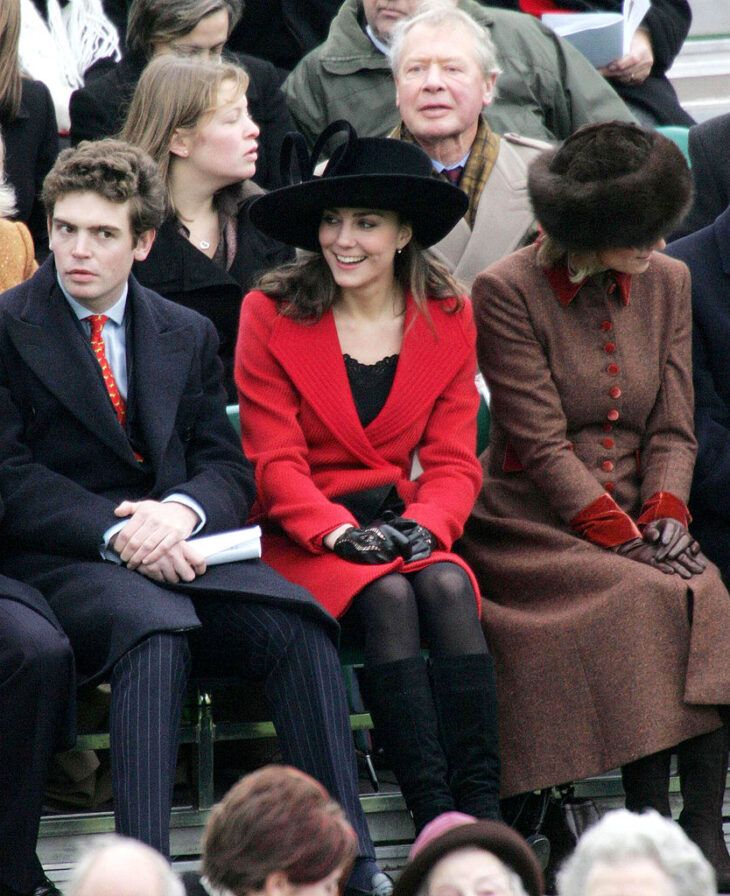 The British beauty attended The Cheltenham Horse Racing Festival in 2008 in style. Here she is looking stunning in a navy trench with black tights, black boots, a black purse, a black scarf, and a black fedora. 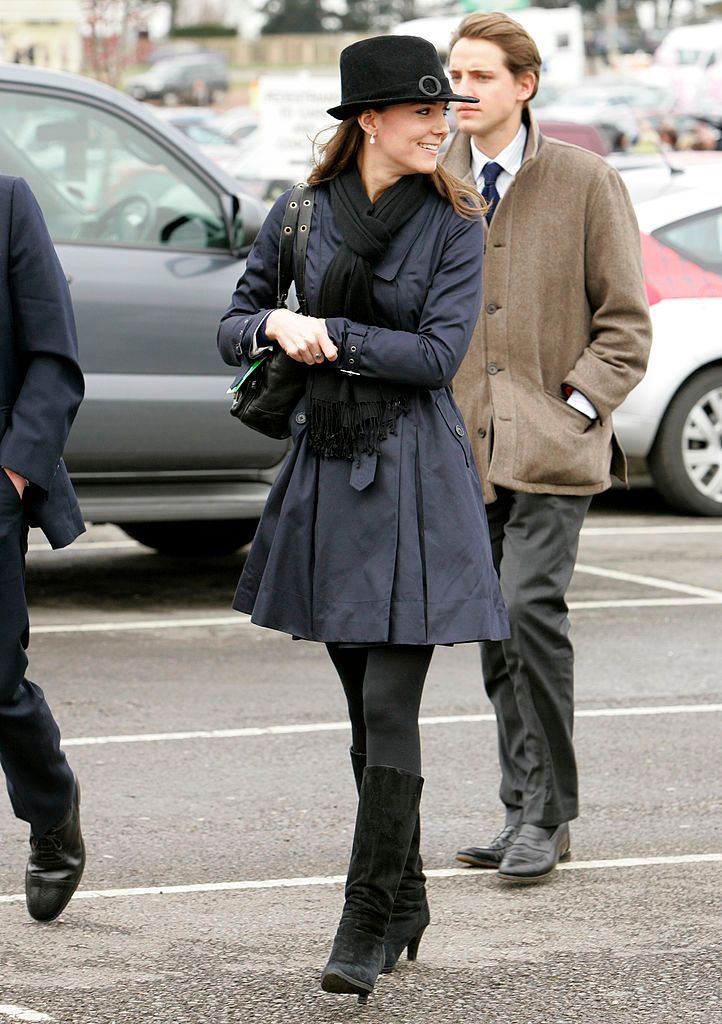 While on a break from Prince William in 2007, Kate Middleton hit the town with her sister Pippa and attended the Young Stalin book launch in London. She was definitely showing William what he was missing with this lacy dress! On Kate’s 25th birthday, she stepped out wearing this black and white retro tunic dress from Topshop that retailed for about $78. After this photo surfaced, the dress completely sold out, proving that the royal girlfriend was quite the fashion icon. 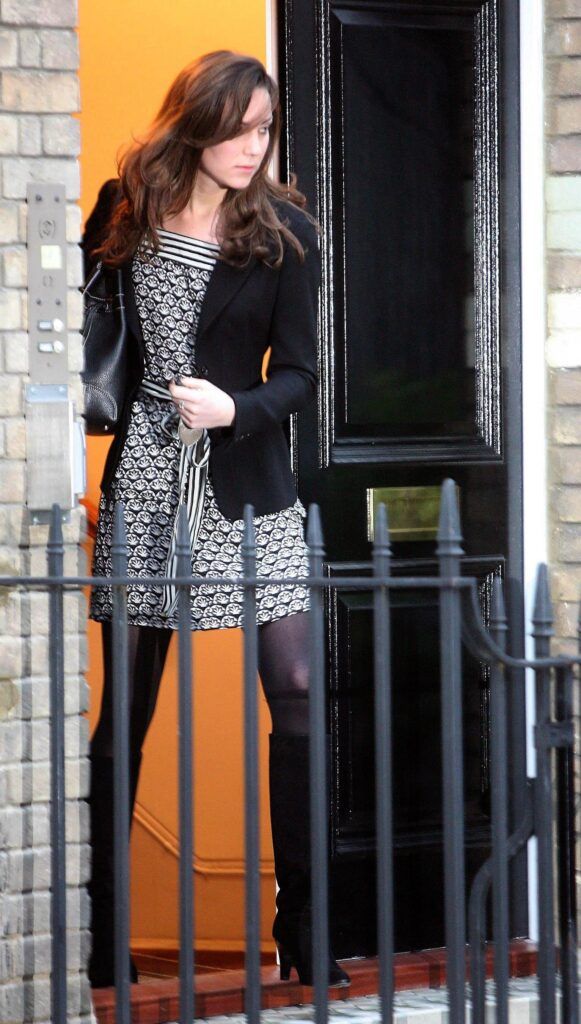 A day before her 25th birthday, Middleton was out and about in London in a brown coat, a dark pair of jeans and a perfect blowout. She must have been doing some dry cleaning, hence the red wool coat she’s carrying around.

This picture is from June 2005 when the pretty brunette graduated from St. Andrews University with a degree in the history of art. As most people know, she met Prince William while she was studying in Scotland. They lived in the same residence, St. Salvatore’s Hall. 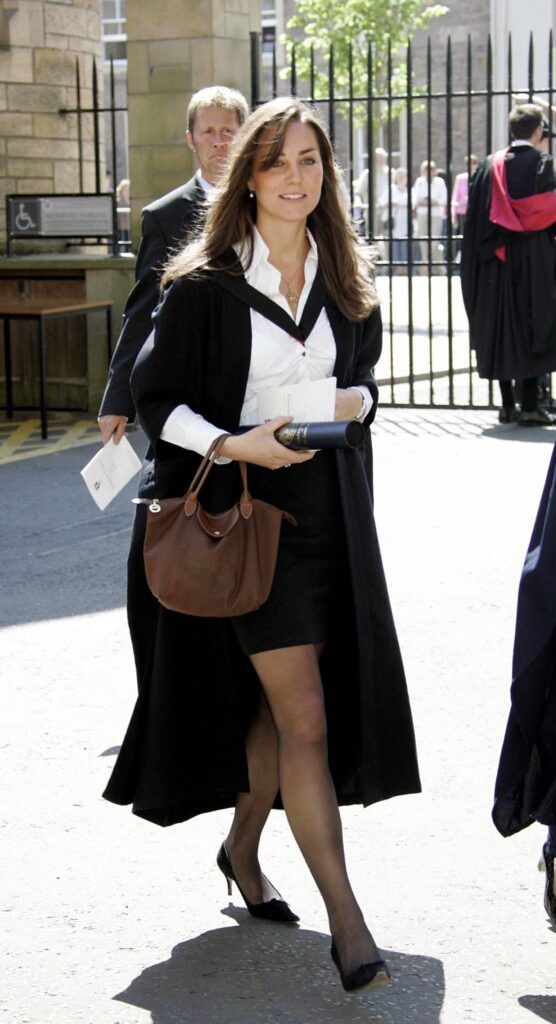 Middleton attended the Day-Glo Midnight Roller Disco, a fundraising event in aid of the Children’s Hospital in Oxford, back in 2009. She organized the event in memory of her friend Thomas Waley-Cohen, who died from bone cancer in 2004 when he was just 20 years old. Prior to becoming a royal, the British commoner’s style was very preppy. Here she is at the Badminton Horse Trials in 2007 looking like she just stepped out of a Ralph Lauren catalog. The white jean skirt paired with the blue sweater and blouse is so preppy but still stylish.

Throughout her relationship with Prince William, Middleton has been a constant presence at his polo matches. Here she is in 2009 at the Cirencester Polo Club. William was playing for the Dorchester Trophy and his girlfriend was there showing her support. In 2006, Kate attended Camilla Parker-Bowles’ daughter Laura’s wedding to former underwear model Harry Lopes with Prince William. This was a really big step in their relationship and meant that Kate was completely accepted in royal circles. 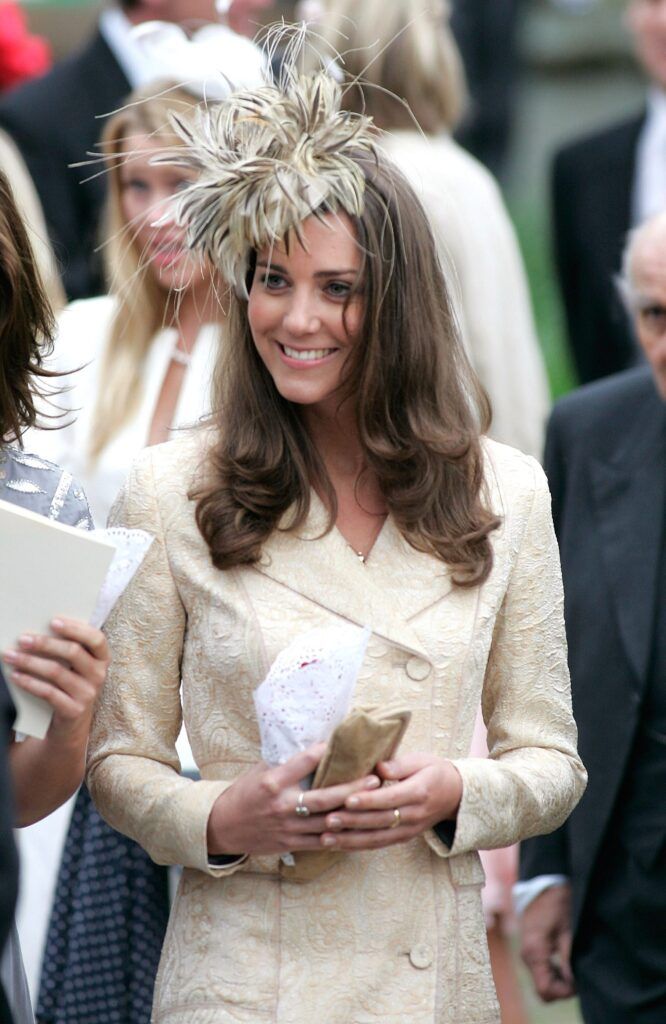 This picture was taken shortly before Middleton graduated from St. Andrews University. Kate was out and about in St. Andrews with her father and was dressed really casually. Her cami top and low cut jeans are so 2005! 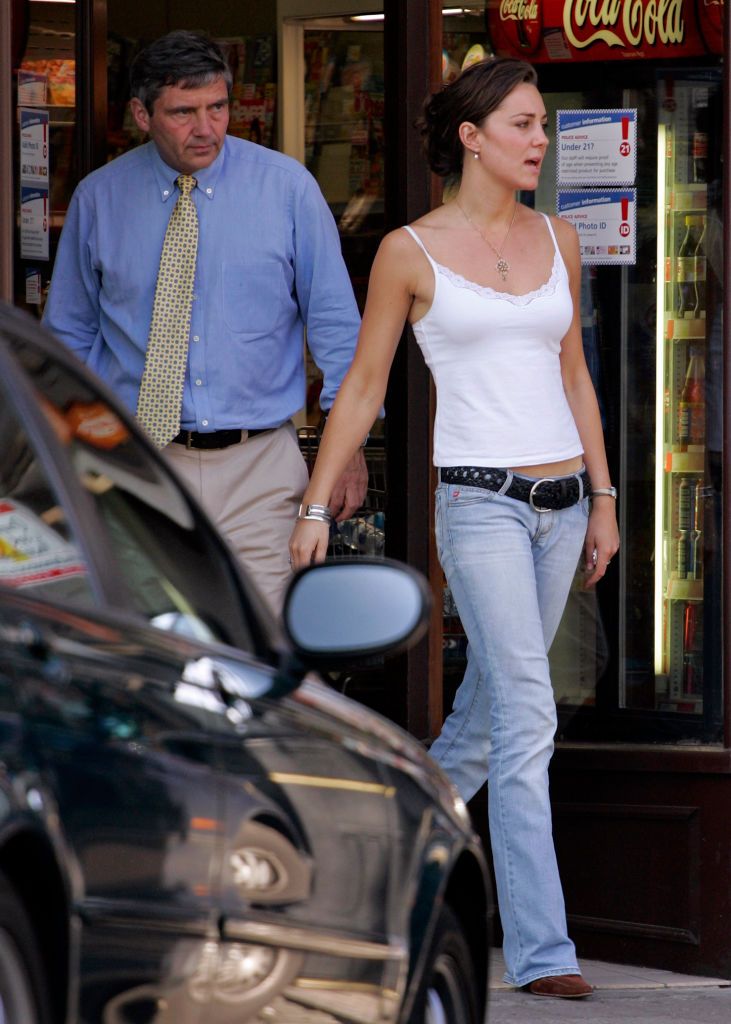