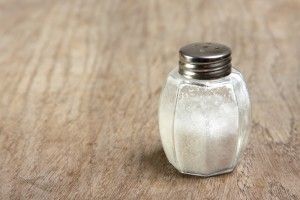 In order to prevent well over half a million deaths in the U.S. over the next decade, Americans just have to do one, little thing—reduce their salt intake by one quarter.

Considering the average American consumes about 3,600 mg of sodium a day and the national recommendations for healthy adults is 1,500 milligrams (mg) per day—there is a lot of cutting in order!

But it’s a group effort, says Pamela Coxson, study’s author from the University of California, San Francisco. “The gradual [salt] reduction is something that many countries around the world are working on in various ways…a big majority of our intake of sodium is coming from those types of processed foods [so] reducing sodium intake is important for everyone, not just a small subset of people who are salt sensitive.”

For the study Coxson and her colleagues ran three salt-reduction scenarios through computer simulations that predicted how a lower-sodium diet would impact a person’s risk of having high blood pressure or dying of cardiovascular disease.

Based on their calculations, study researchers calculated that approximately 280,000 to 500,000 fewer Americans would die over the next decade as a result of a gradual decline in average sodium intake over ten years to about 2,200 mg per day.

For people who do want to cut back on their sodium, Coxson recommends small dietary changes—“a little more toward fresh fruits and vegetables, and away from processed foods,” she says.