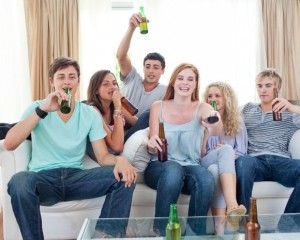 Scientists have discovered a link between a gene in the brain and a tendency to binge drink among teens.

The findings, published in the Proceedings of National Academy of Sciences Journal (or the PNAS), linked the RASGRF-2 gene to a process in which alcohol stimulates the brain to release dopamine, which in turn triggers a sense of pleasure and reward, as well as an inclination to drink more.

“[Those] with a genetic variation of the RASGRF-2 gene, get a stronger sense of reward from drinking alcohol, making them more likely to be heavy drinkers,” said Gunter Schumann, study lead at King’s College London’s Institute of Psychiatry.

The study focused on mice who had the RASGRF2 gene removed. When they reacted to alcohol, the mice lacking the RASGRF-2 sought out alcohol much less due to reduced dopamine production.

However, when the same scientists studied brain scans of 663 14-year old boys, those with genetic variations to the RASGRF2 gene had greater dopamine release and brain activity, deriving more pleasure from drinking alcohol. When the team followed up with the same group of boys at the age of 16, they found that those who drank frequently had the RASGRF-2 gene variation.

Schumann says that it just goes to show that “people seek out situations that fulfill their sense of reward and [pleasure]… if your brain is wired to find alcohol rewarding, you will seek it out.” He further noted the strong correlation between how our genes shape brain function, and in turn, our human behavior.”