Redheads At Risk For Melanoma: Skin Cancer Can Develop Without The Sun 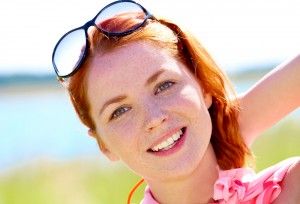 New research has found that redheads may be predisposed to skin cancer without effects from the sun.  The study was published on Wednesday in the journal Nature with Dr. David E. Fisher as the senior author. The researchers studied mice with different skin tones. Skin tones are made of a mixture of the red/yellow pigment pheomelanin, and the brown/black pigment eumelanin.

The study looked at three groups of cancer susceptible mice- black, albino, and red haired. They were looking to study mole development under ultraviolet light, but their study took a surprising turn. Before the ultra violet light was even applied, 50% of the red haired mice had developed cancer. That was a great contrast to the black and albino mice, who developed cancer at a much lower rate and speed.

The researchers were so surprised at the results that they tested the laboratory for any possible light contamination that could explain the results. Finding no other explanation, the results had to mean that red haired mice were naturally at a much higher risk of melanoma. The only biological difference between the three mice groups was that the red haired ones had a higher concentration of pheomelanin.

The results of the study showed that red haired people are also at a higher risk of melanoma. This was known previously except that people thought it was caused by sun exposure. The study found that the pheomelanin pigmentation caused oxidative stress inside the skin cells, which lay the foundation for cancer.

Sun damage can exacerbate the rate of melanoma and so all individuals should wear sunscreen and protect themselves. Fisher added that with further research, they might discover chemicals that could counteract the natural pigment damage in redheads. He adds that they could theoretically add the ingredients to sun lotions and help prevent skin cancer with a simple topical application.