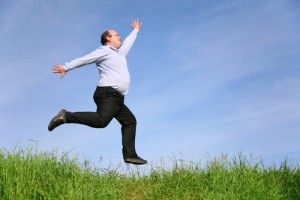 Obese individuals are 8 percent less likely to suffer from depression, according to a new study out of Canada this week. Researchers at McMaster University have uncovered a link between FTO (also known as the fat gene) and depression.

The study researchers had been investigating whether obesity was tied to depression. In an unexpected turn of events, they found out that the opposite was true. The study results revealed that the fat gene is also the “happy gene” and is successful in reducing the chance of depression by a moderate amount.

“The difference of eight per cent is modest and it won’t make a big difference in the day-to-day care of patients,” says Professor David Moore of McMaster University. “But, we have discovered a novel molecular basis for depression. It is the first evidence that an FTO obesity gene is associated with protection against major depression, independent of its effect on body mass index.”

The study analyzed 17,200 DNA samples from test subjects in 21 countries around the world.

The results are consistent with 3 additional large scale studies. The genetic status of patients in all of the studies proved that the FTO gene is associated with protection against major depression.

While the research is promising, the team notes that more biological analysis is required to support a definitive link between FTO and depression. Follow-up studies will use the same approach to determine whether a link exists between these genes and other conditions associated with obesity, such as Type 2 diabetes.