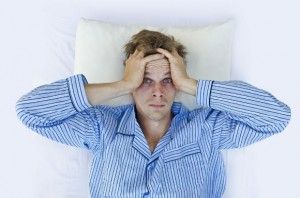 A small study of poor sleepers suggests that breathing problems may be the culprit of some forms of chronic insomnia.

The study, published in Sleep, a scientific journal, monitored the sleep patterns of a group of 20 chronic insomniacs, and revealed that each individual woke approximately 30 times a night due to respiratory issues— such as either:

What’s more surprising is that none of the study participants realized they suffered from breathing problems during sleep.

Due to the fact that the study included no control group of healthy sleepers, no definitive medical link can be drawn between respiratory issues and insomnia. However, Dr. Michael J. Sateia, Professor of Psychiatry and Sleep Medicine at Dartmouth College’s School of Medicine points out that the findings do provide a possible explanation of how breathing troubles during sleep can “promote instability of the upper airway.”

A follow up study by Dr. Sateia and Wilfred R. Pigeon, of the Canandaigua VA Medical Center, in Canandaigua, N.Y., interviewed 20 men and women with chronic insomnia in hopes to discover the root cause of disrupted sleep. Although no participants attributed their awakenings to a breathing disorder (i.e., sleep apnea) and the majority attributed disrupted sleep to nightmares, pain, racing thoughts or trips to the washroom, studying the participants during sleep told another story. Each participant spent a night at the sleep clinic, wired to sensors that tracked brain waves and breathing. Researchers charted every awakening (a minimum of 16 seconds) and every breathing issue causing oxygen intake to dip well below normal.

“Almost every awakening turned out to be preceded within a second by an abnormal breathing process — which led to the awakening,” said Dr. Barry Krakow, medical director of the Maimonides clinic and its research arm, the Sleep and Human Health Institute.

Overall, the study suggests that breathing disorders may be an unknown culprit of insomnia and treatments such as sleep therapy (for those unknowingly suffering breathing issues during sleep, or  dental inserts and airway pressure machines (i.e., CPAP) may help keep airways open during sleep and allow insomniacs a restful night of zzzzzzzzzzzzzzzzzzzz’s.