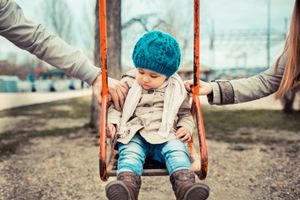 A new report brings good news for children of divorce. Swedish researchers have found that children in joint custody arrangements are no more likely to have mental health problems than the children of parents who remain together.

The report, which was produced by Malin Bergstrom and a team of researchers at Stockholm University’s Center for Health Equity Studies, involved an examination of roughly 150,000 Swedish school children. The goal was to find out how divorce and separate living arrangements affected the mental and physical health of children.

Historically, studies have suggested that divorce increased the risk that children would suffer from emotional problems and have difficulty fitting in.

The real problems appear to affect kids living with only one parent. For example, 22-percent of children living with a single parent had trouble sleeping. Children in this grouping were also most likely to experience regular headaches (19-percent).

In essence, despite being shuttled from one household to another on a frequent basis, kids in joint custody situations appear to fare better than kids living with a single parent.

“It was surprising that children who move frequently and have two homes experience less stress than those in one stable setting,” Bergstrom said.

Philip Cohen, a sociology expert at the University of Maryland, says the report suggests that children in joint custody situations may find themselves in more comforting circumstances than one would imagine.

“The joint custody arrangement may be an indicator of a less acrimonious relationship or breakup between the parents, which we would expect to have fewer negative consequences for the children in subsequent years than a more conflict filled family life,” Cohen said.