HIV Advocate Sue Government Over Ban Of Needles In Prison 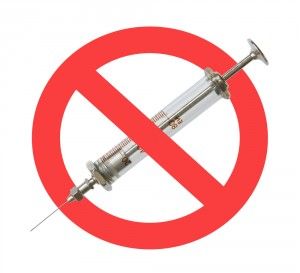 Canada’s federal government is being sued by a former inmate and several HIV advocacy groups over its ban on distributing sterile needles in prisons. The plaintiffs argue that the government is violating the charter rights of prisoners by failing to provide sterile needles and syringes. But a spokesperson for Public Safety Minister Vic Toews defended the government’s “zero tolerance” policy on drugs in prisons, and highlighted the safety risks of allowing “potentially violent” inmates access to needles.

Steven Simons, who was an inmate at Warkworth prison from 1998 to 2010, claims that he contracted hepatitis C as a result of sharing needles with another prisoner at the facility. The lawsuit names the Correctional Service of Canada, its commissioner, the public safety minister and Canada’s attorney general, and seeks the implementation of a needle exchange program in Canadian prisons.

Sandra Ka Hon Chu, a policy analyst at the Canadian HIV/AIDS Legal Network, one of the groups involved in the suit, estimates that the rate of HIV infection is at least 10 times higher in prisons than in the general population, while the rate of hepatitis is more than 30 times higher.

CSC spokesperson Véronique Rioux said that the organization asked the Public Health Agency of Canada to provide it with research on needle exchange programs in 2006, and claims that the agency found no data proving such programs reduce the risk of blood-borne diseases.

But a report published by the Canadian HIV/AIDS Legal Network in 2006 reviewing prison needle exchange programs in countries like Spain and Switzerland found they reduced needle-sharing and drug overdoses, and did not result in needles being used to assault staff, or a rise in drug use among inmates.