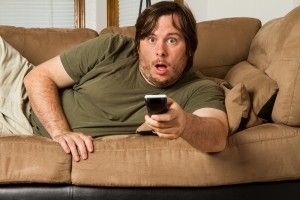 Researchers from the Harvard School of Public Health in Boston have found that males who watch 20 or more hours of television per week may actually be turning their mighty “little swimmers” into lazy couch potatoes.

The study discovered that avid TV watchers have half the sperm count—compared to men who watch no, or very little very little, television.

The study polled 189 men between the ages of 18 to 22 about their exercise, diet, and TV watching habits and measured their answers against their sperm samples.

Findings showed that the highest quarter of TV-watchers (meaning those who consumed 20 or more hours of the boob tube) were found to have 44-percent lower sperm counts compared to those who watched almost no television. Previous studies support the claim that a sedentary lifestyle actually warms the scrotum and affect semen concentrations by stifling oxygen compounds and degrading sperm cells.

“We were fortunate to examine a range of physical activity that is more relevant to men in the general population,” said Jorge Charravo, assistant professor of nutrition and epidemiology at Harvard School of Public Health and study co-author.