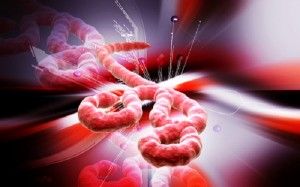 New research out of Canada has found a scary possibility:  Ebola could become airborne. The testing was done by The Public Health Agency of Canada, together with the Canadian Food Inspection Agency, and led by Dr. Gary Kobinger.

The researchers used an experiment with pigs and monkeys. The pigs carried the virus and were placed in a room with wire mesh separating them from the monkeys. The animals were not able to touch each other. After eight days, a selection of the monkeys showed signs of Ebola infection.

The airborne transmission possibility would explain the spreading rates in certain parts of Africa. In addition, it would explain why some pig farmers test positive for Ebola antibodies without contact with pig blood. It was previously thought that Ebola was only able to infect humans via bodily fluid contact.

The researchers are now looking at their hypothesis of pigs being a natural host to the virus. They will also be calculating the extent of the airborne transmission range.