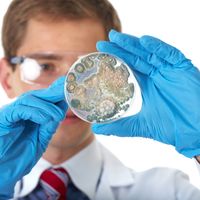 A recent study from the Hazel Mitchell of the University of New South Wales, in Australia reveals that certain bacteria may trigger and maintain Crohn’s disease.

When researchers studied 19 children recently diagnosed with Crohn’s disease and compared the levels of bacteria in their intestinal tracts to 21 healthy children; they found an increase in a common cluster of bacteria called proteobacteria (including E. coli and Campylobacter concisus that have been linked to intestinal disease) in those kids with mild Crohn’s.

Children with severe Crohn’s, as well as the healthy kids with no diagnosis, showed lower levels of the bacteria. This suggests that proteobacteria might in fact trigger the onset as well as the continuance of the disease.

“We deliberately examined children newly diagnosed with Crohn’s disease because we thought this would increase our chances of detecting [bacteria] species that initiate Crohn’s disease,” said the principal researcher, Hazel Mitchell.

While Crohn’s disease causes painful inflammation of the digestive system as well as abdominal pain, fever, diarrhea, weight loss, joint pain, skin issues, and bleeding from the rectum; other factors—such as the lengthy use of antibiotics drugs, or excessive smoking and alcohol consumption—can also alter bacteria levels in the intestinal tract.

The findings are positive for Crohn’s sufferers as they may aid new treatments that target intestinal bacteria.