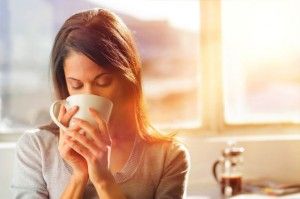 We’re drink a cup of morning Joe because it kick-starts us from bed to the office with a caffeine-filled punch! Because we’re so used to hearing about the negative side effects of consuming too much coffee—we’re actually surprised when we hear the beneficial health advantages to this morning guilty pleasure brew.

Well brace yourselves, current studies on coffee have deemed it a “health elixir” that not only protects the heart, but also lowers the risk of several cancers as well as the risk of Parkinson’s disease.

And that’s not all! The latest research on coffee find that this super-concentrated antioxidant potion is rich in flavonoids, an antioxidant compound well-known for its antiviral, anti-allergic, anti-platelet, anti-inflammatory, and antitumor benefits.

The bottom line is that while the majority of Americans don’t consume an adequate amount of antioxidant-rich fresh fruits and vegetables—they can make up a bit of the difference by drinking a cup of coffee.

In addition to the mental and physical alertness most of us down a cup of coffee to achieve, the caffeinated brew is also a rapid yet safe mood enhancer, which means it acts upon the central nervous system, stimulating the brain and all the major nerves, and facilitating cognitive function overall.

Coffee enhances blood flow to the brain, which means it:

In fact, “when Baron Ernst Von Bibra referred to coffee as a ‘pleasure drug’, he was alluding to the fast-acting, feel-good, mood enhancer,” says Chris Kilham, of MedicineHunter.com and Ethnobotany Professor at the University of Massachusetts Amherst.

Kilham points to a study published in the Archives of Internal Medicine, Harvard researchers that linked drinking caffeinated coffee to decreased rates of depression among women. The study found that women who drank two to three cups of caffeinated coffee every day (or 300 milligrams of caffeine) were approximately 15-percent less likely to develop depression compared with those who consumed one cup or less per day or those who drank decaf. The study was conducted over a 10-year period.