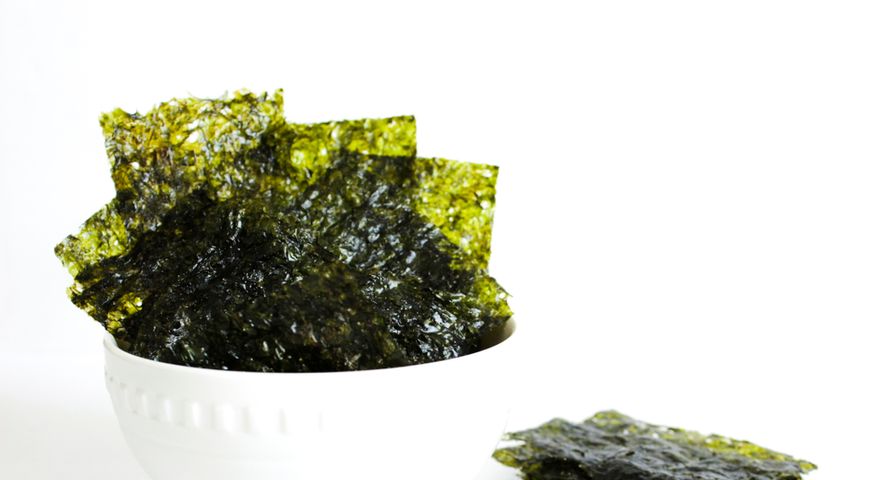 This beautiful earth is responsible for giving us so many amazing edible plants and animals, but the bounty doesn’t end when you hit the seashore. Our lakes and oceans are a treasure trove of edible delights, and while everyone is familiar with the amazing fish and crustaceans we have access to, what about the lesser recognized category of edible sea plants?

There are actually many varieties of edible sea plants, all with different health benefits and nutritional composition. From blue, green and red algae to kelp and other types of salty seaweed, there are so many reasons to consider including some sea vegetables in your diet, and so many ways to incorporate them! Today let’s take a look at nine of the most common edible sea plants out there…

Are you a fan of the seaweed salad that they often serve at sushi restaurants all over the country? If so, you’ve already eaten Wakame and may not even know it. While most restaurants will just call it a seaweed salad, most of the time it’s made from Wakame, a type of Japanese seaweed that’s very popular in soups and salads.

While this vegetable English name is actually ‘sea mustard’, wakame has a mild, subtly sweet flavor. From a health perspective, there are many known benefits to this green sea vegetable, one of them being it’s high concentrations of eicosapentaenoic acid, a type of omega 3 fatty acid. It’s also rich in niacin, thiamin, calcium, sodium and iodine. A study by Hokkaido University has shown that wakame contains a compound called fucoxanthin, which has been shown in testing to burn fat and assist with weight loss. 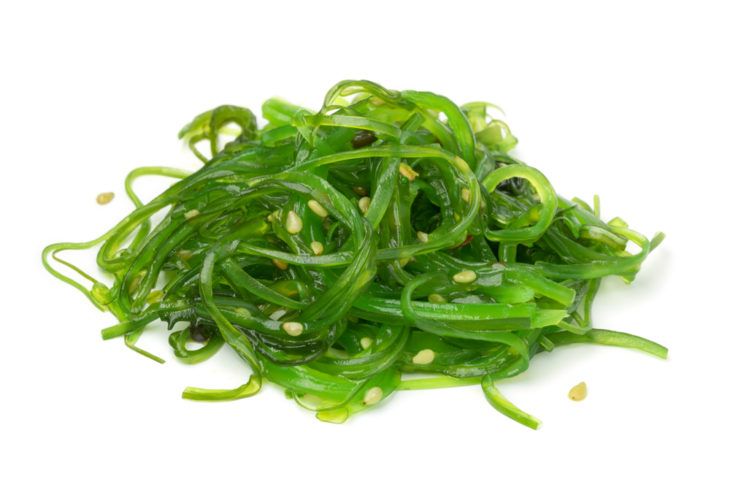 If you don’t really dabble in the edible sea vegetables category yet, Dulse is a great type of seaweed to start with. When fresh, dulse sort of resembles a red leafy lettuce, but dried, it has a salty, sort of smoky flavor and leathery texture when dried as whole leaves. You can also find flaked dulse, powdered dulse and many seasoning mixes that used dulce in their blend.

This red seaweed grows in the cold waters of the Northern coasts of the Atlantic and Pacific oceans and it has long been a dietary staple for people in Iceland and Northern Europe. Dulse is high in dietary fiber and protein and is rich in many essential vitamins and minerals as well as fatty acids and antioxidants. While traditionally, dulse is eaten straight up as a snack food, you can also sprinkle dulse powder on popcorn, add it to scrambled eggs or crumble it into salads. Some also claim that when you pan fry a leaf of dried dulse, it takes on a flavor very similar to bacon! 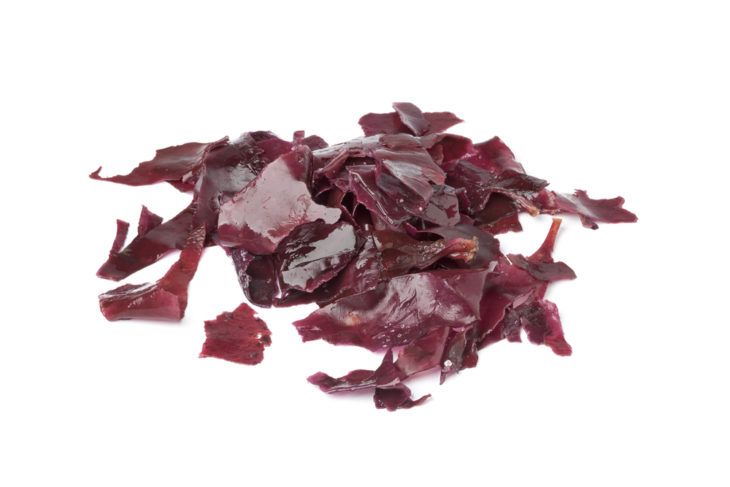 Spirulina is a type of blue-green algae that can be consumed by humans and animals. Its popularity has grown rapidly in recent years as it has been used as a dietary supplement. Spirulina can be found throughout various parts of the world, but because of its dramatic growth in popularity as a dietary supplement, it is now being cultivated in places like China, Australia, and Hawaii.

Like lentils, it contains all nine essential amino acids, and 1-tablespoon contains about 4-grams of protein. In addition, spirulina is also an excellent source of calcium, which makes it a popular food source for vegans who do not consume dairy. While spirulina lacks vitamin B12, it does contain other B vitamins as well as iron and niacin. It has a mild taste which makes it easy to add into smoothies or sprinkle on other foods. 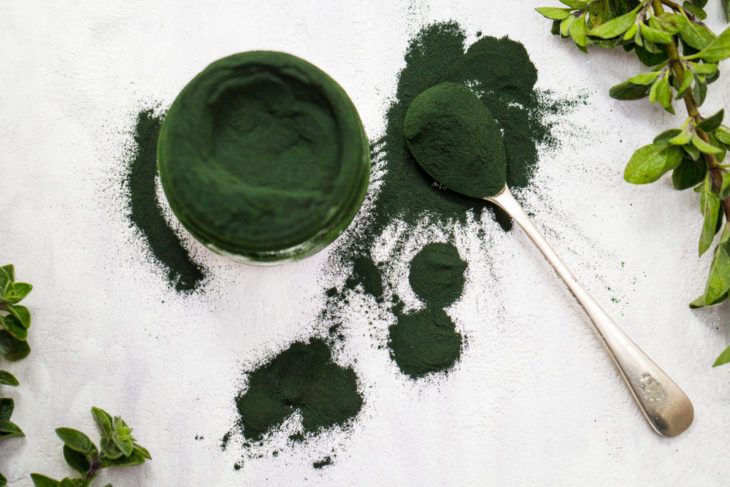 Kombu is a type of edible sea kelp that is very popular in Asia and Japanese cuisine in particular. While it is found growing in the wild, it’s popularity has led to widespread cultivation on ropes in the seas of Japan and Korea. Over 90 percent of all Japanese Kombu cultivated is grown in Hokkaido.

This superior sea kelp is sometimes called the “King of Seaweed” because it’s the only seaweed that can be used to make Dashi, a type of soup stock that’s an integral part of Japanese cuisine. Nutritionally, kombu is a good source of dietary fibre and glutamic acid, the amino acid responsible for the fifth taste sensation known as umami. Kombu is also known to contain very high levels of iodine which can cause thyroid issues, so those suffering from hyperthyroidism should consider other forms of sea vegetables for their diets. 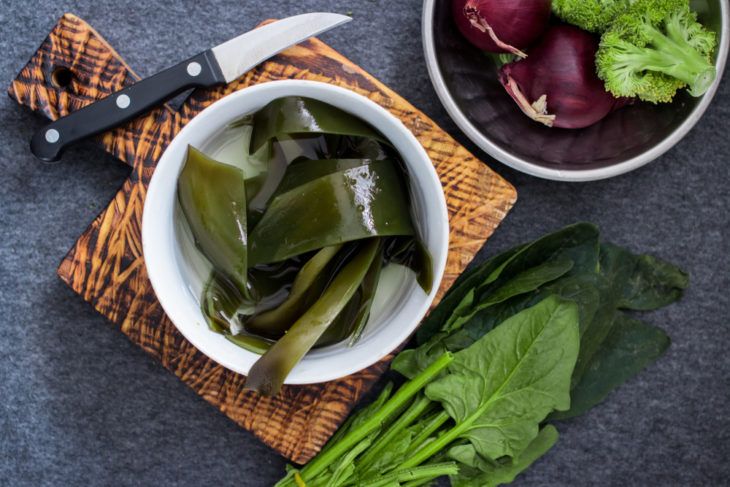 If you’re a sushi fan, there’s no doubt that you’re already familiar with the green sheets of seaweed known as nori. For those who don’t know, nori is the name for the edible species of red algae that’s used to make those green paper-like sheets of seaweed most commonly used in sushi making.

Nori is produced and processed throughout Japan and China and it’s surprisingly big business, with over 600 square kilometres of Japanese coastline producing over 350,000 tons of nori. Nori is known for its substantial levels of vitamin B12 and plays an important nutritional role in many vegan diets. While all seaweed is proportionately high in iodine compared with other foods, Nori actually has the lowest levels of this halogen element amongst the seaweed species. 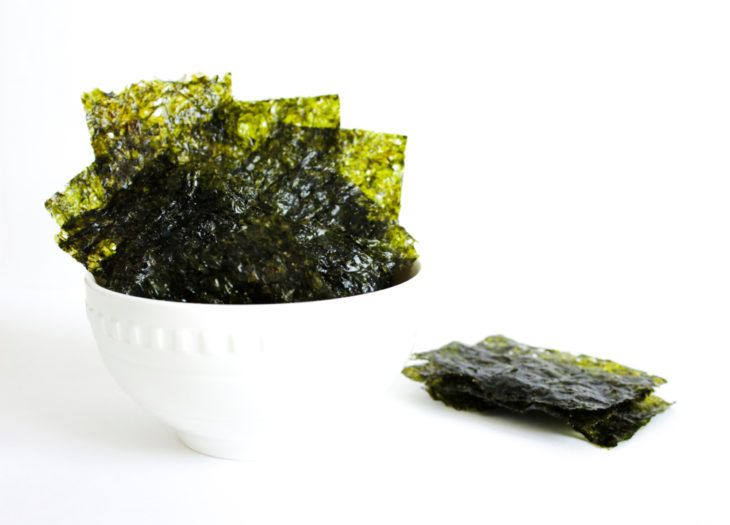 Carrageen Moss, also known as Irish Moss is a type of red algae that grows in abundance along the coasts of the Atlantic Ocean in North America and Europe. While the name can be a bit misleading, this sea vegetable is not a moss at all, but rather a type of red algae seaweed that has been harvested by the Irish for centuries where its documented use goes back to the early 1800’s.

Carrageen Moss is a wonderful natural thickener and is commonly used to thicken soups, stews, smoothies and even make pudding. It’s also put through an extraction process to make Carrageenan, a popular thickening agent used in the food industry. Many people are calling carrageen moss the next big superfood due to its high concentrations of Vitamins including A, K, E, and F as well as calcium, sulphur and potassium. 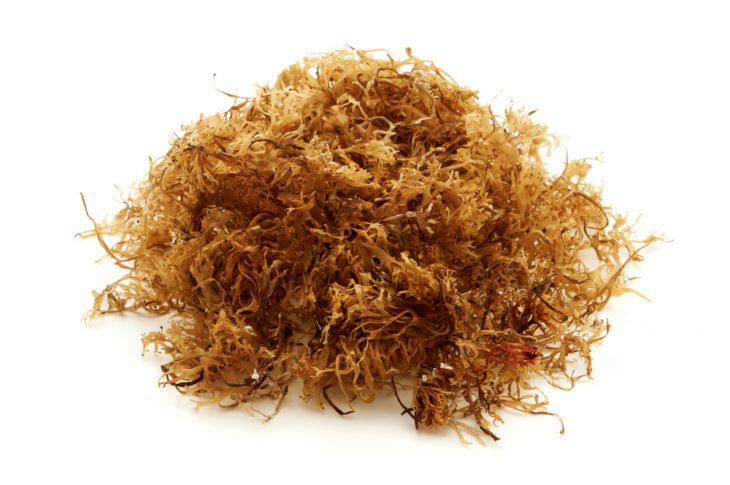 Arame, also known as sea oak is another type of brown algae that’s popular in Japanese cuisine (yes, the Japanese really love their seaweed.) The dried form of arame comes in dark brown strands that reconstitute quickly for soups and salads and has a mild, semi-sweet flavor and a firm texture which makes it a great ‘starter-seaweed’ if you’re just starting to incorporate sea plants in your diet.

Its mild flavor makes it easy to incorporate into your cooking and it works well added to baked goods (thanks to its mild sweetness), salads or chopped and sautéed with vegetables like peas, carrots and onions. Arame is a good source of dietary fiber as well as calcium and magnesium. It’s also high in Vitamin A and iron. 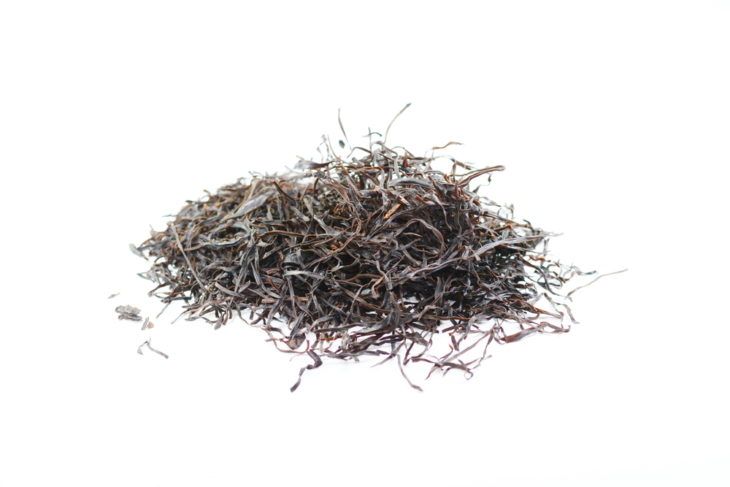 We previously mentioned spirulina as one of the most popular types of edible blue-green algae but it’s not the only one. Chlorella is the cousin of spirulina and is another type of single-cell blue-green algae that has gained massive popularity as a nutritional supplement. It is most commonly found in powdered form and its vibrant green color is due to its high concentrations of chlorophyll.

During the late baby boom of the late 1940’s and early 1950’s chlorella was seen as a promising food source and solution to a global food crisis due to its nutritionally-dense makeup. When dried, chlorella is 45-percent protein, 20-percent fat, 20-percent carbohydrate, 5-percent fiber and 10 percent vitamins and minerals. The food crisis was eventually solved through other means so these days chlorella serves only as a nutritional supplement and though it is high in vitamins A and B, there is no scientific evidence to support other health claims at this time. 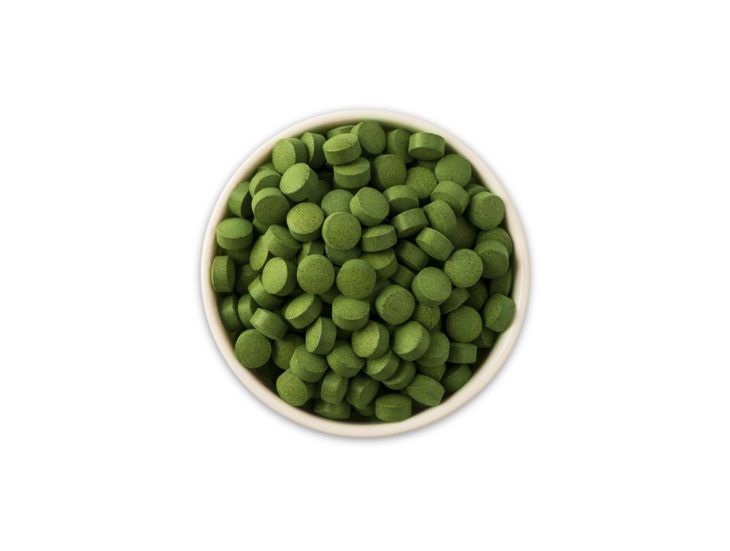 Caulerpa lentillifera or more commonly known as sea grapes or green caviar, is a species of edible sea vegetable that is popular in Indonesian and Japanese cuisine. Sea grapes get their name from their small round shape and are often called green caviar because of how the salty little spheres pop under your teeth.

They are commercially farmed and grown in Cebu, Philippines and are exported to Japan. Sea grapes have a soft, succulent texture contrasted by a sharp peppery flavor. They can be eaten fresh (where available) or found packed and preserved in jars. Sea grapes are rich in vitamins and minerals including calcium, potassium, vitamin C and are rich in omega 3 fatty acids. 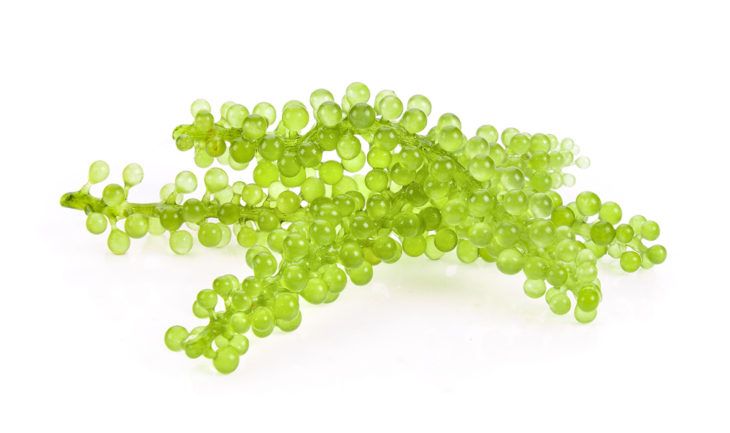